I have some bars of steel strap laying around and decided to hit them and see what happens. I think its 4063 carbon steel?

I bounced around a lot of settings before I finally thought to just check the recommended chip load on the bits I’m using.

Adaptive: I “successfully” did an adaptive path at 3.5mm DOC, 400mm/min feed and 10k RPM. Pretty sure I did a 60% load/width of cut. This didn’t really sound the best, but it was successful. 3mm sounded pretty great. I walked back to 2mm just so I didn’t feel I was riding the edge of failure and I’m very happy with the results. Walls look great, the floor…not great but not beyond what a finishing pass would clean up. I’m still dialing in my finishing pass settings. I might even tool change to a 4 flute for that.

Slotting: I tried a 3.5mm DOC slot with the same settings as above. It actually worked way better than I thought but I was coming into and out of the material. When it came out, it had enough bite that it knocked my X axis off a couple mm worth of steps. I was doing a straight line forward to back in Y, starting a few mm below the strap and ending a few mm after. 2mm worked. Again I walked back to 1mm just so I didn’t feel like I was riding that line of failure.

There’s a lot of room for optimizing and using better tool path strategies, but I’m extremely impressed it was able to handle the above. With slotting and adaptive both I saw no sparks and other than the ramp in, the sound was a very nice and smooth brrrr. The chips were hot and had some blueing, not sure that’s great but I’m not sure if its a deal breaker either. I didn’t use air or vac (so I could see). The part was just warmish to the touch after each run. Short runs though.

Anyone else messing with steel on the pro? What I’ve seen so far is convincing me that it’ll do a very respectable job on it.

I know very little about machining steel but I have heard that chips coming off blue is a good thing. It means it is carrying away the heat from the cut. I am impressed that you are getting these results. Are you using a spindle or the router?

Carbide compact router. I kind of understated it I think, honestly I’m a bit blown away by it 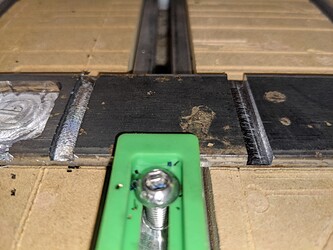 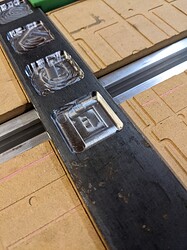 PXL_20210613_1911251533024×4032 3.63 MB
This image definitely leaves some things to be desired. The only one I really remember in detail is the last one, the lowest one in the picture’s orientation. That was when I settled on a 2mm DOC for adaptive. It actually looked great until I came behind it with a finishing pass that had awful settings, clearly lol.

Some of the other pockets I really noobed on, I was going as fast as 1500mm/m on some of them before I actually thought to look at the bit recommended chipload. Whoops. Even at those crazy speeds though, they ‘worked’.

Pretty sure this was doing the last pocket. Including it because despite its quality, I think its clear the wall finish was actually pretty good in it. The finishing pass I ran on it made things worse

Disclaimer: I have little to no idea what I’m doing here.

I’m impressed. I would never attempt those kind of depths in steel on my SO3 because it doesn’t have enough rigidity. I also would not have expected the router to perform that well in steel. Once I finish my linear rail conversion, I know what I am trying.

Not that I’m a machinist, nor have I attempted to cut steel. Thanks for sharing, steel is on my list.