When I load the file and hit start, the z axis retracts as usual and I’m prompted to insert a new bit. The problem is, when the z axis retracts (0.5” retraction by default) the z axis behaves as if it’s hitting something, but there’s nothing in the way. when I jog the z axis up and down it looks like its moving just fine. Here is a link to a video of what’s going on. I can’t upload a video so I added it to my google drive

That Z move seemed very fast. Maybe too fast and you’re losing steps? Did you change any Grbl parameters? Especially any related to Z axis acceleration or max feed rate?

What do you have your Z-axis configured for?

If you move 1" vertically in the interface does the machine move 1" to match physically?

Contact us at support@carbide3d.com and let us know all the specifics and we’ll do our best to assist.

If I were to venture a guess the movement of the Z is set too fast.

Sorry for the long hiatus! I actually Fixed the issue shortly after posting this thread, however I’ve now run into the same issue.

I think it’s the threaded plastic insert that threads into the lead screw. Here is a photo of it. 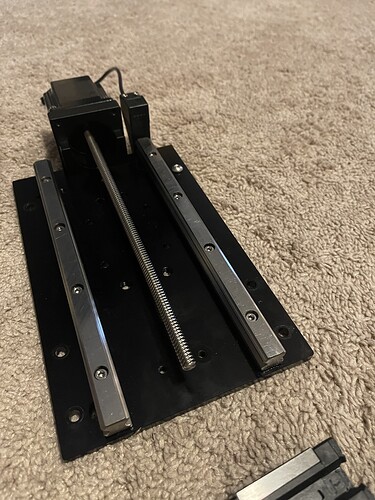 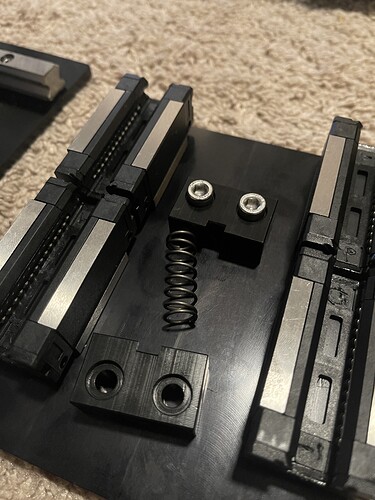 When I got the machine, I initially expierenced major z axis problems. I turns out, that the black threaded block that is bolted to the z axis, was not screwed in. Like the screws were literally barley hanging on.

Obviously this was an issue since One block is bolted to the back of the spindle mounting plate, and has the threaded rod for the z axis running through it.

I had to take apart the entire z axis and Bolted it back on and no issues.

Basically what I think the problem is is there’s a second block that is NOT bolted to the z-axis, but still has the threaded rod running through it, has a spring between it and the block that is attacked to the z axis.

Last time I put it back together, I made sure the spring had some tension in it between the two blocks while they were threaded on the rod. (Not too much tension ,however)

When I took the z-axis apart The spring had no tension and it seemed that the two blocks actually moved farther apart somehow. I also think that it is due to the Z axis moving fast I’m going to check my grbl parameters.

Any advice? How much tension should there be in the spring between the two blocks?

The other issue too is, the block that is not bolted to the z axis has some minor cross threading at the top and some fine burrs on the interior threading which means it has worn down internally. The one that is bolted has no wear internally and both of them thread into the rod just fine with no room to wiggle at all.

Please write in to support@carbide3d.com and we’ll work out swapping out your Z-Plus for a rebuild.

I just upgraded an xl to Z-Plus and the new Z-Plus had a lot of loose studs on it. I tightened it up before installing it on machine. Seemed like the assembler put it together and forgot to come back and torque the bolts and studs.

I had one fall out myself the other day (S4XL), so I went back and tightened them all. Good reminder not to assume anything from a pre-assembled part.

@zwitchguitars I also have the Shapeoko 4XL, and I have had a plethora of quality control problems in my machine. We should compare notes.

Happy to chat via DM if you’d like, but for now, that one bolt has been my only issue.