Material left inside carving, not certain what to adjust 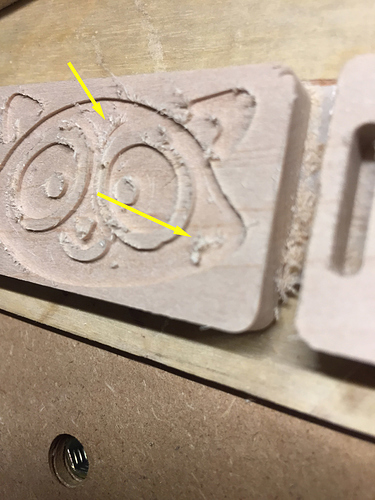 Carving with a 1/16" square endmill and I’m getting these small pockets of uncut material. It happens on most of the copies of this though not all. I tried bumping down the stepover a little, should I just go a bit more? That seems like the right solution but again didn’t seem to have an effect, though only went from .028 to .025. I also tried speeding the router up but that didn’t seem to have an effect either.

Well, using a SQUARE end mill might be one on the problems, you should be using ROUND end mills…Hahahaha.

Ok, kidding aside, it would be helpful if you started with telling us the software that you are using so that we can help.

Sorry about that, Carbide Create. Calculated path shown below. The issue on the ‘cheeks’ seems centered on where it starts hollowing out the pocket.

The fix is to keep tightening the step over smaller and smaller. CC is not well-written piece of software and you’ll find yourself doing some things that don’t make sense. I often use a 3/4 inch cutter and if I go more than 0.400 step over it misses spots, which make NO SENSE!

Now using a 1/8 end mill would also be a lot faster, and looking at the design “should fit.”

Have fun, and play with the settings…

Fair enough, just wanted to make sure I was on the right track. 1/8 is close but it wasn’t quite fitting around the mouth and nose. Its not unreasonably slow and I’m only making maybe 10 more but it’s good to learn all the troubleshooting I can. For the ones I’ve cut already I’ll just be using tiny sanding sticks.

Anyone have tricks for sanding inside a groove like this? I have small ‘sanding sticks’ which are quite small but some detail is just too small. I was thinking of trying a ‘wire brush’ like this, though something that looks less aggressive:

I did another batch tonight and had similar results with the stepover at .020 but I can’t actually compare because I noticed afterwards that the set screw on the X axis was loose. Ironically I had trouble getting it out because of the loctite… Hopefully it’s fully seated this time, so I’m not sure if that was my problem all along or what.

Somewhat cleaned up from tonight’s batch: 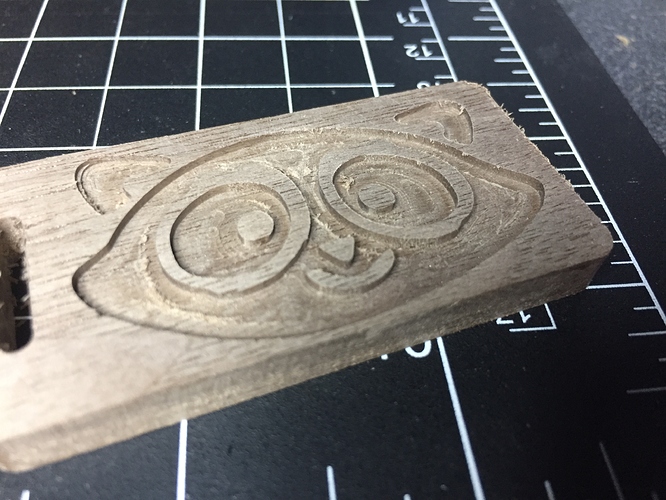 Looks as if you may have some backlash or be loosing steps:

I would agree with will and add maybe try a finish pass with a ball nose after thats all sorted.Is this somthing you skeched from scratch? I like it nice job

Yeah I buried it in my comment but the X axis set screw was loose. When I removed it to apply loctite I must not have put it back in all the way, this making that procedure rather pointless. The backlash around the ear was from stopping the job and restarting it, but that means it didn’t find it’s way back to the original zero so, yeah it’s all making sense. I’ll try another tomorrow see if this cleared it up.

Followup question, is there no compatible pulley with a flat milled in it? I realize making them would be a lot more difficult I’m just so tired of set screw problems I’d consider replacing them if there was one that conformed to the motor shaft and therefore didn’t rely on the set screw.

Yeah fingers crossed it’s fixed. I had an artist friend sketch it for me based on a design I found online but couldn’t track down the author. Online group I know uses the racoon as kind of it’s patron animal and the few I made were a hit so I’m trying to whip up a few more. Hense why tedious hand sanding isn’t desirable.

Not that I know of. Bought mine from SDP/SI and had to warm up the pulleys to fit them on the shafts — no slipping thus far (and no flats).

So yeah, double checked the set screws and added more tension on the Z axis, while giving the rest of the machine a good look over and I got a much better result. 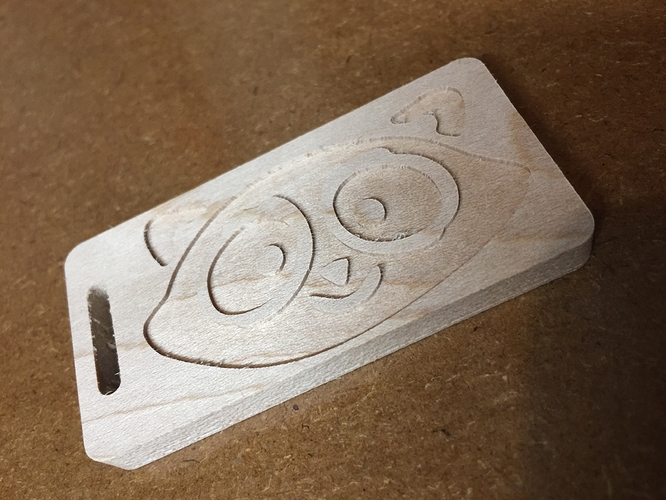 I did get the ‘scalloped edge’ issue I’d also had elsewhere but that seems to be me having damaged the bit by running it in such a poorly setup machine. Luckily C3D sells them 3 at a time

very nice,Id assume the scallop is from the spindle not being square,watch this vid and see that you think. below the vid is the svg for the tram mount if you want to use it.

The numerous degrees of freedom in the Shapeoko that allow you to build it as a kit, are also places where error can be introduced. In this video, I’ll go through the steps I took to restore as much precision as possible to my CNC machine. For those...

Mark thanks I did see the video and that could be part of it. I may try slower settings first but checking square is on my to do list.