I think @Julien uses blue tape to help get the belt position in the clip consistent.

However, I don’t think you need very much tension in the Shapeoko belts, certainly no more than the holding force of the steppers - 60N, or less, that’s breakaway torque, not actual usable during motion torque.

My motivation in trying to measure the tension quantitatively was to figure out what sort of forces we were actually achieving and running at so that we could;

I only realised part way through as I did the math(s) that matching Y tensions was important for squaring & calibration.

It currently seems to me that the slipping of the belt clips may well be either smart design of happy accident and that slippage is there to avoid us cranking the belt tensions up to the point where we fatigue the stepper shafts and break stuff. I’m considering going back to mine and backing off the tension, when I’ve done a few more measurements.

I have found, since measuring the tension with my phone that I can get a couple of teeth worth of extension in the clip with finger pressure holding the clip down, if it jumps before the clip gets cammed down by the bolt I’m probably over-tightening it.

I agree with you that the belts are a pain, but they’re much cheaper than ballscrews (which need more motor torque and therefore bigger stepper drivers in the controller etc. etc. ), they’re at least the equal of a leadscrew for backlash, on the regular size Shapeoko probably better and their material is actually pretty good at vibration damping, this is all by design at Gates who designed the GT2 & GT3 belt profiles.

That’s not to say I’m not trying to work out ways to improve them but I think I’ll be focusing my dial gauge on the X rail to Z carriage V wheels first as many others have before me (thanks for posting the CAD Dan).

Has anyone else tried the “measuring belt frequency” method ?
(@ColdCoffee you mentioned you did, did you make a note of what frequencies you got ?)

I’m in the process of including that tip in the ebook, and it would be nice if we could crowdsource a reasonable frequency range for each machine. On my SO3 at this point I feel like [110-140Hz] is a good target range.

and I’m switching my belts to steel core so I’ll be following this guide… maybe tonight (EST).

Currently, working on a drag chain support since I rotated the extrusion so the v-wheel rail is on the back side.

Currently, working on a drag chain support since I rotated the extrusion so the v-wheel rail is on the back side.

What’s the benefit of that rotation?

Haha… Well… I didn’t have to take off my “SHAPEOKO” and machine serial number stickers off. It’s easier to use the flat side to establish a datum with, say, 1-2-3 block when spacing the rails. Nothing particularly better, but slightly more convenient.

That’s a pretty good reason, I had wondered how to lift those stickers for the rail, assuming I didn’t need sticker thickness shims right there…

I Have an XXL with stock Y belts from 3 years ago and a new steel core belt on the X from a couple of months ago.
The Y consistently cuts within .004 over the total Y travel and has a frequency of 58.
The X is off about .002 for each 10-12 inches over it’s travel and is at a frequency of 73. This using the Gates Carbon Drive App.

A small update on belt tension targets, in this vintage Winston Moy from 2015;

He describes the target GT2 6mm belt tension as between 10 and 15 lbs force on the belt and the “hang the machine by the stepper motor” method of adjustment.

At 15 lbs force tension in the belts that would give ~ 135 Newtons belt tension. That’s already on the heavy side for a regular NEMA 23 stepper with a 6mm shaft but gives an indication that the belt tensions are designed in this sort of range.

Another interesting element is that the current belt tensioning clips were used simply as belt anchors in that generation of machine and the belt tension was applied in a more normal way by moving a pulley to set tension.

I was looking for 125Hz, which I picked because that is what you used

Once I found the “tooth” that got me close, I then used torque on the bracket screw to dial it in. It wasn’t easy, took 30 minutes of trial and error until I got it right. The shorter Y belts (I have an XL) were much easier than the longer X belt. Those with the XXL will probably need to budget more time.

Yeah, it’s very fiddly the first few times, once you’ve done it a few times it gets faster. Try video recording yourself explaining what you’re doing until you get that clean and then you’ll find you’ve learned to do the belts without thinking about it

I would be interested to hear about what kind of calibration factors ($100/$101) you folks end up using after using this belt tensioning method with a target frequency of ~120Hz.

I had recently reset my machine to default GRBL params, which among other things resets $100 to 40 steps/mm, so I went to recalibrate it only to find that…it was pretty much spot on (I cut a 30x30mm piece using a finishing pass, and got 30.00mm on Y and 29.96mm on X). It could be a coincidence, but…

I think my X (steel-core) belt is telling me that it has had enough, it won’t twang for me no more. 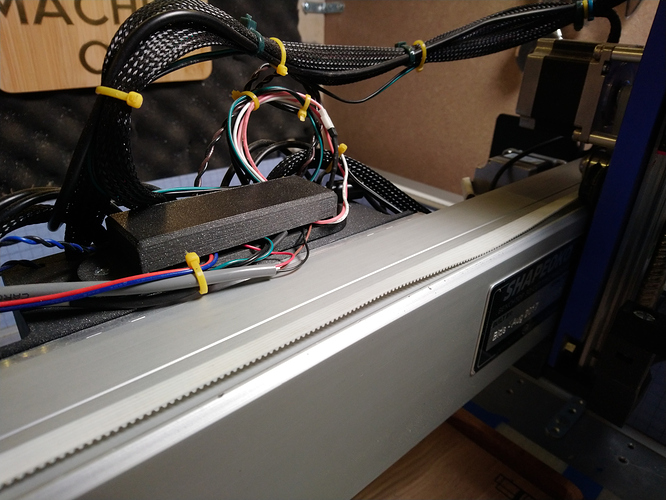 Either 125Hz was a tad too much for SO3’s X axis, or most likely it just wore out, it’s been a good while since I changed it.

As for Y that happened, well, Gates has quite a long discussion of the relative merits of the different core materials for the belts, glass fibre and aramid fibre both score very well on the “keeps bending” scale whilst steel can survive excess tensions better than either of the flexier fibres.

However, the max rated tensions for the OEM Gates belts is in the 800 Newtons range so I suspect that’s not what broke it.

I think the steel cored belts are best just considered a consumable like cutters and an item you regularly check for consistent tension tone, keep spares of and be prepared to replace. I think the Carbide and AliExpress steel belts are cheap enough compared to the OEM gates fibreglass belts to be treated as a consumable too.

And no, I’m not at all sorry for the puns

I’m continuing to review the evidence on belt tensions and I think that table needs revising soon to stop not far above 100 Newtons for the sake of the steppers.

I think the steel cored belts are best just considered a consumable like cutters and an item you regularly check for consistent tension tone, keep spares of and be prepared to replace

Yup. I’m still on the first roll I got on Ali two years ago, and I know what I’ll be doing tomorrow evening.

@Julien
Just curious,
in another thread, it is mentioned about the steel reinforced belts -vs- the bend caused by the radius of the idler pulleys and stepper sprocket. I think I read that this tight of a bend is not “Good” for the steel. … What about the folding the belt over to use the belt keeper/tensioner.?
Have there been any belt fails that may be caused by the steel wire breaking at the fold in the clip and causing what would look like the bad belt pictured above?
It seems like that would be the likely area for the belt to fail from over tension…?

The reinforcing members are bonded into the neoprene over the full length of the belt, otherwise cutting the belt to length would result in a bad outcome…

So far as I have been able to determine from the manufacturers info, the issue with small radii for steel and fibreglass reinforcing members is the bend radius coupled with repeated flexing causing the reinforcements to fail at the flexing locations.

The belt clips are way below the bend radius any of the belts are meant to deal with when moving, but they’re stationary, so there is no repeated flexing to cause a wear failure. Whether a compression grip tensioner like the ones Neil Ferreri posted;

Untested: (EDIT: I should make it clearer…the image is a link to the part) [image]

are a better way of gripping the belt and it’s internal reinforcement members I would like to know.

Maybe the tugging and loss of tension during normal operations? Constantly being “flexed” to some degree…
https://www.mpja.com/GT2-COG-Belt-Aluminum-Clamp/productinfo/33400+HD/ 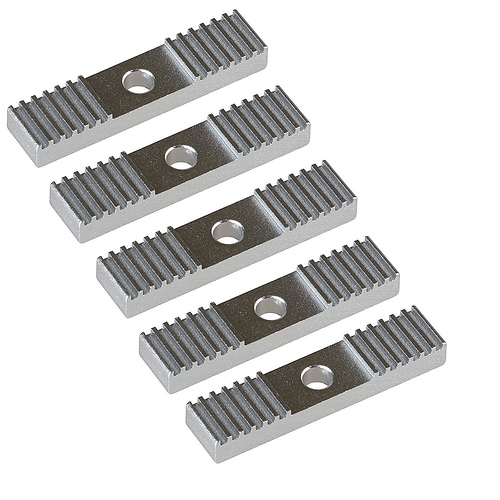 I’ve been thinking about belt clamping and looking at a few options, I’d like to see some failed belts in close up detail to see how they’re actually failing and where.