I’m using Vcarve with the post processor created on this forums for that softare and the latest CM. It keeps throwing this error at me: “Motion Command has invalid target”. totally random. Any file with a lot of arcs will get this error but running the same program from two different files produces this same error at two different places.

I found this but its a fix for fusion which i wasn’t using.

I have run many jobs on the Nomad and this is the first time it ever stopped in the middle of a job. It said: ERROR(1): GRBL ERROR: The Motion command has an invalid target. G2, G3 and G38.2 generates this error. If the x arc is impossible to generate or if the probe target is the current position. I guess I am wondering if anyone else has seen this error or could point me in the right direction. I regenerated the path and will try it again. [49%20AM]

Anyone know how to fix this? 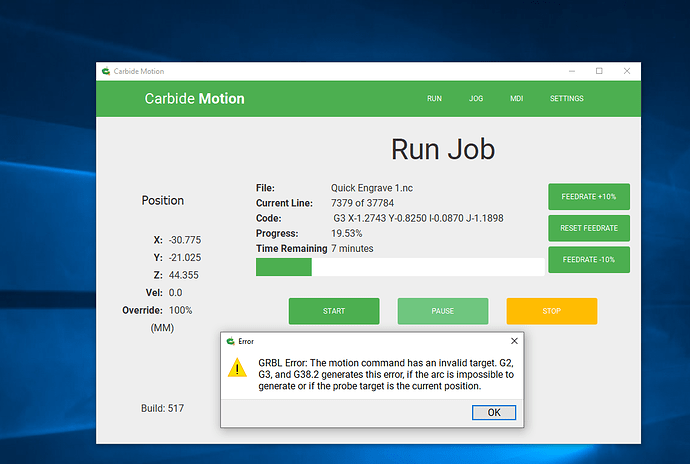 Let’s see if @neilferreri has something to say about possibly applying the same fix in the VCarve post, as was applied in the Fusion360 post.

As a temporary workaround, since this is is related to rounding errors, you may want to try switching between inches and mm post-processors, whichever you were using, see if that helps. It definitely won’t be a definitive cure, but could help getting those files to work. Easy enough to try anyway.

Id love to use a metric Post Processor but I’ve only found one in inches for V carve.

The one found here.

There are two Vectric post processors for the Nomad 883 and Nomad 883 Pro. They should be treated with some suspicion until we get additional feedback that others are satisfied with them. Be sure to run air passes and keep your hand near the E-Stop the first few times a job is run. Carbide3D-Nomad-Inch.pp - For VCarvePro and Cut2D Carbide3D-Nomad-PhotoVCarve-Inch.pp - For PhotoVCarve only Millimeter versions can be created by editing the files, changing the G20 to a G21 and saving the file u…

Try one of the Grbl ones here:

Posts for Vectric V-Carve. Contribute to neilferreri/V-Carve-PPs development by creating an account on GitHub.

Thanks I’ll try it in in and metric and report back.

I made this one for my Nomad and VCarve. It’s metric, and I’ve used it without issue for well over a year. It also works perfectly on a Shapeoko.

@Gerry Anything new I should add to the ones in the GitHub repo?

It actually has less in it, I think. It’s based on the 10.5 Grbl_mm post processor and lets that do most of the work. It’s very short but I haven’t had any issues at all with it:

It’s a derivative of the others with the things that were already in Grbl_mm removed.

It works in ok metric (even though it was programed in inch). Thank You

Yup, the machine will move the right distance regardless of the post processor unit.

My original posting supports arcs and tool changes. I explained what need to be changed G20 → G21. Then rename things appropriately.

If people want it, I’ll work up an optimal post processor.

The posts on my gitHub repo linked above handle arcs and toolchanges (and dwell commands and rapid plunges). I’m always open to suggestions as apparently Vectric is sending people these post processors.

For reference for your post-processor, arc support is in Grbl_mm.pp, which is included in the simple post processor.