New to the CNC world.

I found a file for simple hold downs and decided to try making them out of red oak. Error #1

Using the settings the bit was being pulled out of the collet when making the profile pass. I discovered why having the off button for the controller close at hand was a good thing. The router was a couple seconds later as it was on a power strip.

Reading comments about the file I had downloaded I noted it had been written for cutting plastic not hardwood.

I reduced the depth per pass and lowered the feed rate and it happened again - this time because of user error - I had not cleared the feed rate box but rather added to the existing speed setting - result was I had a feed rate of 3050 ipm instead of 30 ipm- exciting.

Lesson - double check the settings before creating the Gcode.

Found the off button faster this time.

I modified the file again (by this time I am at version ‘h’ and tried again. The bit pulled out again but I stopped it as soon as I seen the depth changing. I’m getting good at hitting the stop buttons.

This time I zeroed the starting point with the touch probe then removed the bit and ran the job without the router running. It looked good. I am ready to test again.

A final question. I noticed there is no tool path created for drilling the 1/4" hole but it does it anyway. I gather from this Carbide Motion takes care of this without making a separate tool path.

There is a toolpath for the hole, it’s just too small to be seen.

Weird, the “default” collet should work (unless it’s actually a 6mm collet? not fit for a 6.35mm endmill?) 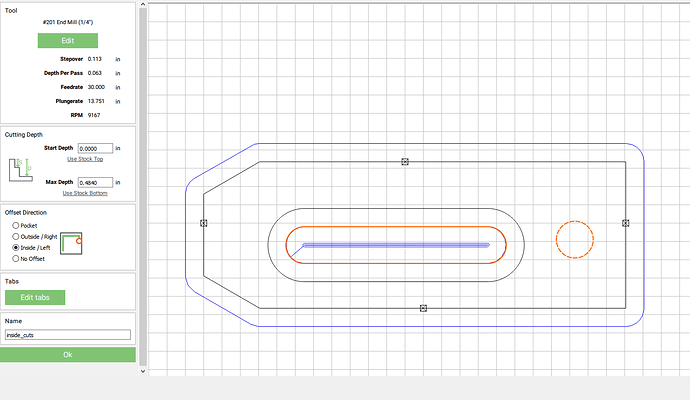 Based on Julien’s response of “Wierd” and it “should work” I started reading about working with wood. I gathered because wood, being a natural product, has varying densities and grain directions only by trial and error will you find what works.

After three days I did get a successful hold down made. I took frequent breaks when the frustration level started to rise and worked in my traditional woodworking shop on other proejcts. I didn’t break anything although I did manage to dig a few holes in the spoilboard (that’s why it is there). When I showed a picture of my efforts to a friend who has 30 years CNC experience in the aircraft industry he referred to it as “Creative Programming Skills”

In the process I have gotten a bit more comfortable with using CarbideCreate. Much more than if it would have worked the first time.

A perk in disguise ??

Good to hear !
Just in case this might help you on your CNC adventure, I’ll leave this here:

I had saved the pdf of the A to Z guide you linked to within a week of receiving my Shapeoko XL. An excellent guide which I am sure to come to appreciate more as I climb through the mountains and valleys of this machine and its software.