New User to the Community

I have been a woodworker for many years but am new to CNCing. I just bought a used Pro XXL last week. The previous owner delivered it from 2 hours away and spent a few hours helping me set it up to make sure I was happy. Kudos to him for that.

I have been reading a ton on the forums here and really appreciate all the valuable advice. Today I installed a Bitrunner and if Amazon hadn’t sent the wrong iVac switch I would have all that working together to control the spindle and dust collector on system.

I have made a few small test projects so far but have mostly been focusing on setup. I plan to cut new spoilboard slats tomorrow on my table saw and find or create a program to drill the holes for mounting.

I have tried to attach a pic of my setup and a closeup of the router. In that closeup you can see the rig I have where the dust collection meets the sweepy. I have a section of abs, a pvc female connector and a blast gate and then the 2.5” hose. All that adds up to 13 7/8 ounces. Any opinions on whether that is too heavy for that mount. I tried a lot of other configurations on the dust collection but the hose kept pinching. It works great now, but I had to move that blast gate lower as I can’t reach anywhere else.

Also, in the lower right of the other photo you can see my control system. I put in a 10” touchscreen that from uperfect that holds a raspberry pi internally. I put a pi 4 in it and loaded the debian build from Carbide. It works great! Thanks for releasing that version. I didn’t really want a laptop in the garage.

Anyway, as I said, I really appreciate the activity and responses from this community. I am looking forward to getting some real work done soon. 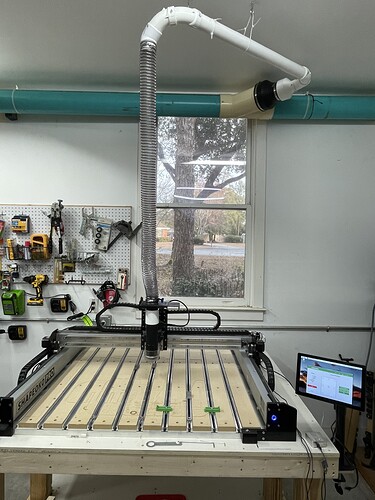 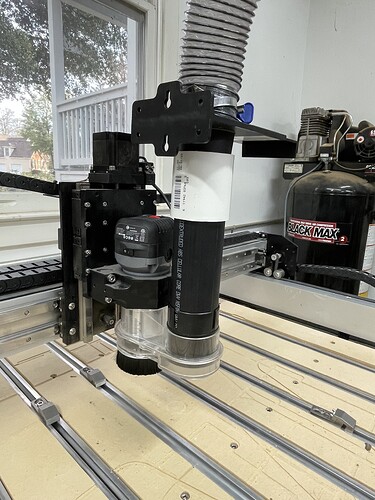 Nice view out the window. As you will discover there is a lot of watching the paint dry and watching the grass grow while sitting in front of the Shapeoko babysitting it. At least you have a nice view to look at.

For slats, it’s not really workable to make them on an XXL — better to just pull one to use as a template.

Meaning it’s not workable just to machine the holes on the XXL?

I can use the drill press but thought the accuracy of the machine would be better. I saw one post where someone suggested building a jig to hold them and flipping the boards around to get the back holes.

You have to either index and feed the slat through incrementally, or cut it rotated — neither seems worth the effort to me.

Over time your slats (Spoilboard) will get chewed up and need replacement. You could cut the slats out on a table saw and some of the holes could be cut on the Shapeoko but the back holes cannot be reached by the machine if the slat is in place. Do not get trapped by having a CNC that you have to do everything on the CNC. Yes the Shapeoko is incredibly accurate but some things are faster and easier to do the old fashioned way. As a traditional woodworker I use a hybrid approach to my woodworking. Some things are easier and faster to do the analog way and some things are more precise done on the CNC. Unfortunately the entire table cannot be reached by the router on the Shapeoko. It would be best to make a spare set of slats before you need them. The more critical the need the more likely to fail. So if you damage one or more of the slots it is better to have ready and waiting at your leisure instead of holding up a project to make a repair. The same is true about having a maintenance kit to replace things when needed and not wait for ordering and delivery.

Be a good boy scout and be prepared.

Ok. I will drill them manually. I just need to
Pull one to check out the specs on the holes and counterbore.

I did buy a whole sheet of MDF so I plan to make at least a few spares.

I had planned to live with the boards the way it came while I learned but it is pretty bad and the last time the previous owner flattened it he only did a portion of the table. I don’t want that to affect things.

Raining here today so I can work on that without getting guilt for not doing yard work.

I have seen reference to removing the bitsetter before flattening. Do you just zero to the table itself?

If you are going to cut past the front edge remove the BitSetter to avoid running into it. Yes use the paper method to zero z.

I went the manual route, replacing 1 slat at a time. This is the first time I ever wished that I had 2 drill presses to avoid swapping constantly between the hole and counterbore.
Now I need to try and read those posts on flattening for the 10th time and hope they penetrate.

I would wait until you’re familiar with the machine and decide how concerned you are with squareness and dimensional accuracy before worrying much about the belt tension or calibration.

It’s worth checking you can get a twang from the belt to know it’s not too loose but other than that, see how your machine performs for you.