Newbie: best way to drill some holes in a case

I got a Nomad 883 and want to use it to drill all the holes in this case:
http://www.frank-buss.de/kerberos/
So there are 3 big holes for the DIN connectors, 2 holes for the LEDs and one notch at the left side for the button. The case has 2 parts, only the top part needs to be machined, should look like this (the notch is at the bottom side in this image) : This is my first project with the Nomad (besides the first wrench tutorial and some simple tests) and I have no CNC experience. How should I do this?

My idea would be to mill the shape of the half casing in the wasteboard, up to a few mm deep, so that I can place the half perfectly aligned and glued with the double sided tape to the wasteboard. Then creating some shapes with Carbide Create, running Carbide Motion, zeroing it manually to some edge and then starting the milling process. I guess for multiple half cases I need to zero it just once?

If I want to do another project, I would just unscrew the wasteboard and use another one (I already ordered the 4 wasteboard package, and some more ball cutters for smaller features than the standard 1/8", because I plan to mill some full detailed 3D models as well). Maybe I could test it with a cheap wood panel first, which I would mill to the right size, because one of these cases costs EUR 5.

And I need to figure out a way how to measure it exactly as well. I have one of these cheap, but surprisingly accurate, electronic plastic calipers from eBay. Any other recommendations what would be useful to have?

A radius gauge will help to get the chamfer around the edge, and a contour gauge makes measurements of features such as the grooves easier.

Thanks, looks like useful tools, I ordered different sizes for the radius gauge and one high resolution stainless steel contour gauge from eBay.

BTW, this is how my task is done by a professional:

Do these big machines have some kind of auto-zeroing? And is it better to use a vise and some jig to mount it aligned, and then mill the case from top? My plan was to stick it with the flat side on the wasteboard, upside down, so that it doesn’t get lose while milling.

The video you linked has a number of parts on a fixture to position them. The machine will have a means of absolute positioning and tool length compensation, as does the Nomad, but the fixture is likely mounted on the machine with registration pins (or stops, or other positive locating means) and was likely cut on the machine itself (not the only way, but the easiest and usually most efficient way).

For a one-off on a pre-molded case, there are a lot of options, and my first choice (in the absence of a fixture system) would be glue a piece to the wasteboard as a stop, machine the stop as an L shape, to be parallel to the machine axes and at a known position so the part can be butted in both for X and for Y, and then tape down the part butted up to the stop. (No matter what software is used for the features n the part, this is a good starting point). I have done a LOT of parts this way. Easy and cheap. For follow up work on existing parts, I often set up a straight edge stop for position and orientation with one axis, and a single pin for the second axis (the bed plate setting the third axis and other two rotational constraints, for the total of six degrees of freedom-- X, Y, Z, pitch, roll, and yaw).

Your thought of milling the profile into the wasteboard is a good one, but the likely result will be either too tight for the part to fit or a sloppy fit that is equivalent to mating two side only. A perfect fit pretty much requires modelling the part perfectly, then cutting the negative with extra relief as needed (corners, for example) to avoid binding. If the part is not a perfect match for the model, you gain no advantage. [I use this technique when doing parts that need repositioning during the job (two or four sided work, for example), as I can be sure that (barring a bad tool size) the cut will match the part.]

As for the features you want to machine, there are a lot of ways to do it. Based on my general workflow, and the need for the notch, I would do this in Fusion360 (or Inventor, but Fusion360 has more features without spending money) by modeling the part, then the holes and slot, and then using the CAM component to produce only the features needed (bore strategy for the round holes, and slotting for the slot), without worrying about a perfect scheme. Let the tool cut air for a while. It doesn’t matter for a one-off. I thnk this could also be done with Carbide Create, but I do not use it, so I can’t give any suggestions there, but I am sure others here can.

Fixturing is an art and a science, and I have about 0.75m of bookshelf dedicated to books just on fixturing, and a lot of others the cover the topic as well (look up Colvin and Haas, Jigs_and_Fixtures… It is THE classic)

Thanks, the L stop is a good idea. I tried it, but screwed it to the wasteboard. Then I tried a mockup of the case, but with the scotch tape it didn’t stick well, was getting lose when milling. So I used a C-clamp as well: This worked, it fits perfectly: (might not look perfect, but this is the perspective and skew, when I insert it straight from behind, it is perfect, which should be no wonder, because I measured the distances in the PCB board with Eagle).

I need some thinner drills for the LED holes, but then I can test it on a real case. Maybe I should build some smaller wood clamps as well, which I could screw in the wasteboard.

While working with it, I noticed a few things and have some questions:

I opened the log window and then hit zeroed, but no message special message is sent, only lots of “Idle|MPos” from the machine all the time. Maybe it is handled only in the PC software? But shouldn’t be too difficult to add a number input for each coordinate, or even some named presets for zero positions. Using one of the rapid positions would be only a half working workaround, because I still have to set the z-coordinate, but if it is possible to mill an L with negative offsets, then it should be possible.

BTW, this looks like a very cool clamp system, and cheap and easy to build:

I think I will try this, in addition to my L stop.

I tried the clamps from the last video, but I milled it smaller and didn’t use a metal axis, so it didn’t work well, and the L stop at the side was a bit loose as well. Maybe I should have milled it out of the waste board itself.

So I tried my first idea, milling the profile of the case. I managed to make it a tight fit, but still possible to insert it easily, by first milling the profile with half a millimeter too short for both sides, than incrementing it step by step by 0.1 mm and each time milling the outer rectangle until it was perfect. I spent a bit more time for it, because I need it for a few dozen cases and to learn how to do CNC things.

Next I designed a simple clamp to hold it down from top. It might have enough friction to hold on its on, but always good to have an extra “finger”

. I drew it in Inkscape and imported it in Carbide Create (couldn’t find advanced functions like Bezier curves and mirroring in Carbide Create). This is the file:
clamp.c2d (122.7 KB)
I just screwed this to the waste board for milling. Turned out pretty good: 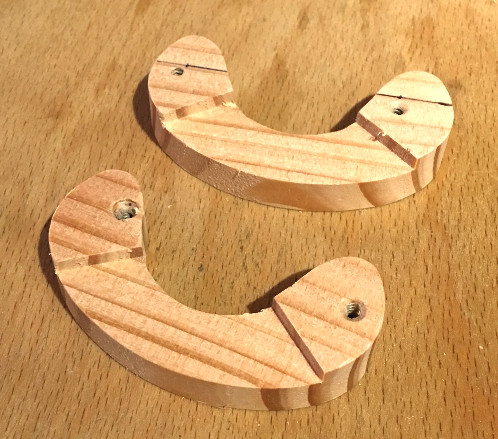 I don’t know how to mill the gap, so I designed it symmetrical and with the gap included. Then I could just screw it together for the final clamp: 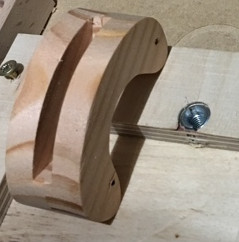 At the right side you can see a threaded insert for M6 screws. This is how I use it: 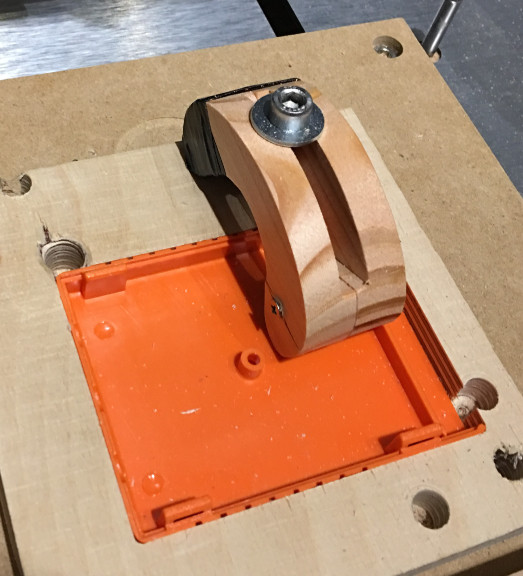 clamp3.jpg523×576 76.4 KB
While screwing the two parts of the clamp together, a bit broke off at the end, but no problem to fix it with some electrical tape

Now I’m waiting for the packet with the smaller ball cutters for the LED holes and then it should work perfectly.
2 Likes
FrankBuss (Frank Buss) September 29, 2018, 7:20pm #9

I went crazy and did the fixture setup again, now milling the form in the waste board itself. This is how it looks like, with the case inserted: 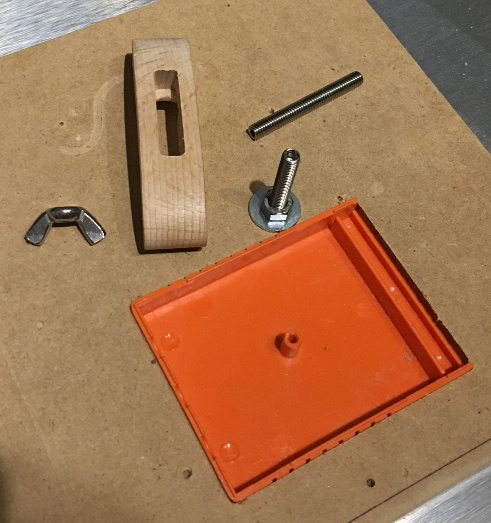 You can also see a new clamp, now made from a solid block of wood, which is more stable than the previous try with the two parts. It is lower profile as well, to avoid to much retract height or other problems. The new file:

And now the toolpaths have tabs as well. Very useful if you don’t want your cutter getting blocked by a wildly rotating cutout. Did I mention I’m a newbie?

For mounting it I used a grub screw. I placed it all in a way to use the existing threading in the metal base plate, so I didn’t need a threaded insert in the wasteboard. With the wing nut I can now clamp and release it very quickly.

Last week the low profile vise arrived as well. With this it was easy to mill the slot in the clamp. I drew a rectangle, centered at (0,0), then centered the cutter at the center of the clamp and done: 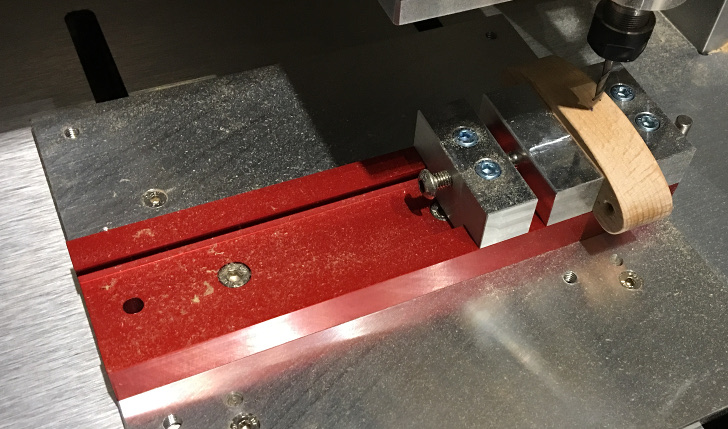 I think with the vise a better fixture would be possible, because I noticed with the MDF wasteboard that you have to be careful when screwing it in the metal base plate, because it is not always perfectly aligned. I tried to align it with the bottom and right side, so when I screw in another wasteboard and someday this jig again, then all coordinates will be right.

Speaking of coordinates: For zeroing I used the rapid position SW. Then I just had to manually zeroing for z. All design files are using the same zero, so I can just place and measure everything in absolute coordinates on the wasteboard. This makes things much easier. Later I had to add a small additional board as well for zeroing z above the wasteboard, because Carbide Create doesn’t allow negative start coordinates, but still easy enough.

This is the final clamp: 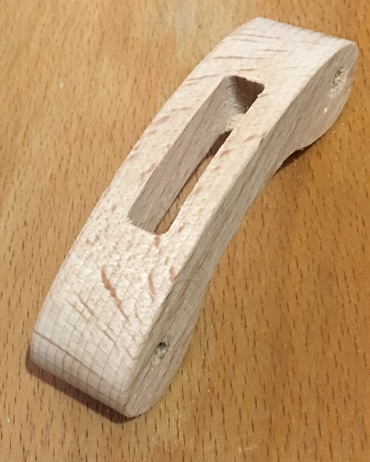 The tiny holes are from screws I used to fix it on the baseboard, because without a clamp, I couldn’t clamp it. 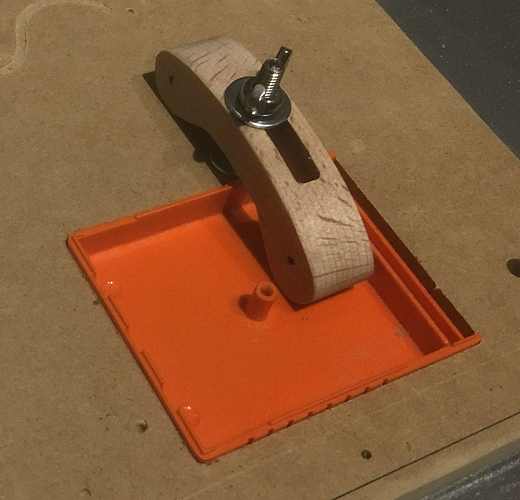 After some problems with the RPM and feedrate (see here for the details), I can now mass-produce the holes very accurately: 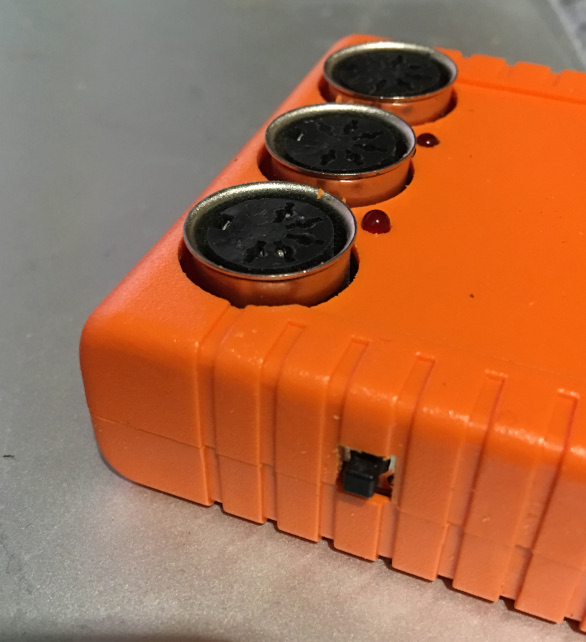 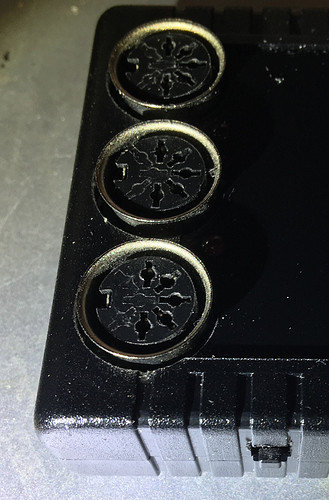 I learned a lot and I’m sure now I will be faster with my next projects. And thanks for all the help from the forum members.

Thanks for sharing! Always enjoy seeing the Nomad being used in a production capacity.