Interesting, can you share details/link about that temperature triggered switch and how you installed it?
How long does it take for the VFD to reach the temperature where it kicks in ?

After spending hours this week-end with this horrible fan noise in my ears, I’ll certainly take a second look at this upgrade.

I would hope that the temp sensor is mounted directly on to the largest chip in the case, not just loose inside. Sure way to burn it up…

Blockquote
can you share details/link about that temperature triggered switch and how you installed it?

There are 12 screws to remove to access the fan’s connection, then cut one of the fan’s wires, solder the switch wires in series with the fan, isolate the wires with shrink tubbing, stick the switch to the back of the heat sink, reassemble. Done.

Just tested the switch with a heat gun and it works.

Thanks. For the switch, did you take the 40 degrees version or some other value?
If you have the opportunity to do long jobs, I’ll be interested to hear about how long it takes for the heat sink to reach that temperature and trigger the fan.
I wonder if wiring a thermistor would be easy enough, to have a more gradual ramp of fan speed. And I will also hunt for a quieter fan of the same voltage/diameter, maybe this would be a good compromise.

Based on the designs I did in my EE career I’d opt for a variable speed fan and the sensor on the component that generate the most heat.

It takes surprisingly little air to remove the majority of heat. It shocked me and I ran my own experiments that confirmed it on my designs. So a slow speed fan will make little noise and remove a lot of heat and them go to higher speed as the demand dictates.

I did use the 40deg switch. Please update if you find a quitter fan. The challenge is that it’s a 12V.

The VFD has a massive heat sink on the back. Mine never even got warm. As a note, my spindle is a 800W version, while the VFD is 1500W. Maybe that makes a difference.

I was thinking about a similar set-up but decided against it for two reasons: (1) KISS (keep it simple [talking a bout me] stupid), and (2) not wanting anything outside the VFD (there’s no empty space in the case).

Please let us know how it goes. Does your VFD ever gets hot?

Does your VFD ever gets hot?

Well I never checked, but currently with that fan running continuously, I would hope it doesn’t !

So for the sake of testing, I tried just swapping the fan, without any additional thermal management complications. I ordered the first 50x50mm 24VDC quiet fan I could find: 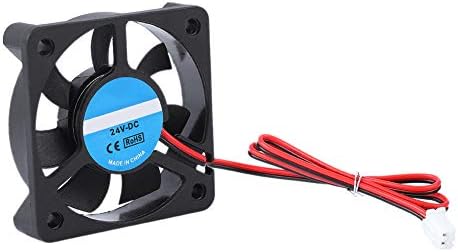 As a reference I captured the sound level at the fan output with the original setup: around 76dB

While I was recording this, on a hunch I tried removing the fan from its housing while it was turning, and that’s when I realized that the horrible noise of the Huanyang VFD is not actually the fan’s ! It’s the sound of the air making its way through the (giant!) heatsink fins inside the VFD (that thing is massive).

For no good reason I decided to cut parts of the air intake grid underneath the VFD, to see if that helped (DON’T DO THIS, don’t insert your fingers, be safe, etc…) 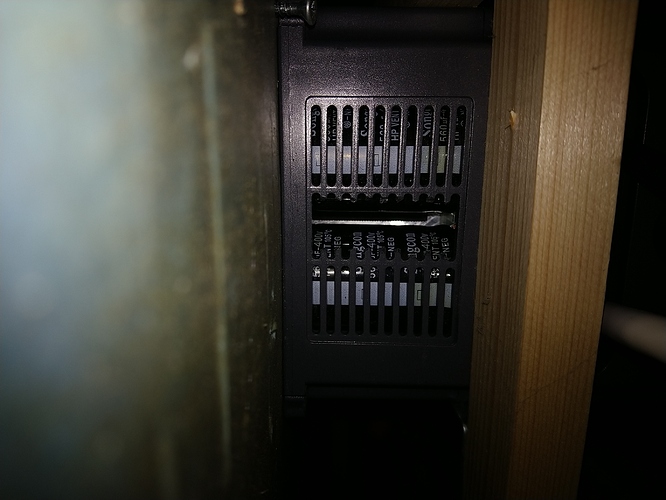 and since I had bought a new fan and standalone testing seemed to show it was a bit quieter, I removed the stock one and installed it (soldered it in place)

Results are slightly disappointing, the sound is down to about 72dB (well, that’s still ~50% quieter)

EDIT: I forgot to mention also that just removing the fan cover improves the noise level. 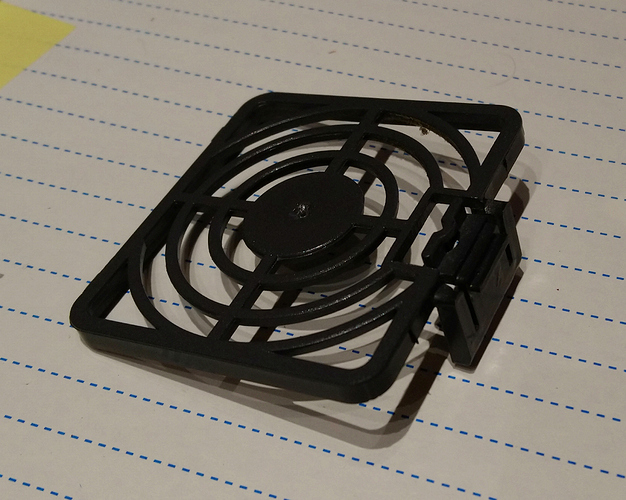 I don’t see a good reason to keep that piece of plastic, so off it goes.

My next step will probably be to just add a resistor inthe circuit to drop the voltage so that the fan spins slower, I’m pretty sure that a lower air flow will be enough to keep that monster heatsink nice and cool.

Then I’ll probably buy one of those cheap thermal controllers I linked above too if only for the sake of trying them.

Ironic, isn’t it. Well at least it’s a testimony to the quietness of the spindle !

75 decibels seems awfully loud for a cooling fan. Having said that, how loud is the cutting noise with say a standard 1/4” upcut bit in something like pine? I’m still a flat earther when it comes to spindles personally, my Dewalt with SuperPID is still quieter that most of the cutting noise and I only added the SuperPID for the lower speed range. I’ve always thought of quiet spindles like turn signal noise next to a Harley with straight pipes. When I’m running my XXL I’m usually cutting plywood with a single straight flute bit which is exceptionally loud though, maybe if I was cutting renshape I would care about a quiet spindle?

The effort to keep noise down stems from my specific situation: shapeoko in a small garage, neighbors on the other side of the wall, and wife watching TV on the other side of the door. So I try to deal with all sources of noise. I could almost never run my Makita at 24000 RPM before, it was just way too loud. I was living in 10-12K RPM territory at that time for that reason. Since I upgraded to a water-cooled spindle, and now that I think of it, pretty much all my toolpaths are now in the 18K-24K range.
Of course the cutting noise is still there, but it’s inside the soundproofed enclosure, while the VFD is outside the enclosure, and close to where I sit, so I just notice it more.

For me the spindle quietness was a game changer (high RPMs, here I come), but I agree it may not matter much in a more typical shop.

-3db is half the power so that’s significant

Just as an update form my side, after cutting AL for several hours, the VFD fan (with the resistor switch) never came on. The VFD is not hot (not even warm). Of note, my 800W spindle never pulls more than 1.5A (per the VFD reading), with a median of .9A.

The temp in my garage is around 68F.

Switching to a spindle (w/o the noisy fan) is orders of magnitude quieter than using the Carbide router. My noise readings, while cutting AL, is about 73dB with the air compressor and the S3 set-up running.

My S3 is in a wooden enclosure, with plexiglass sliding doors and side windows. The top, back, on of the side (which is windowless) and bottom have a 1" closed cell foam padding (a former camping sleeping mat) as sound insulation. The compressor sits on the cement floor with a fan blowing to keep it cool next to it (the compressor was not made to run 100% all the time).

Quick update: FINALLY received my switch today, installed it quick and dirty, we’ll see, but I enjoy the silence already 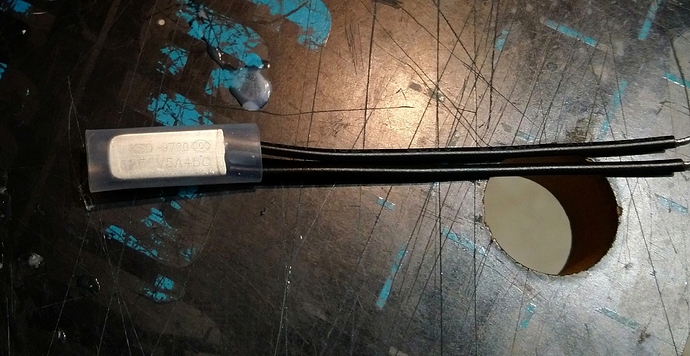 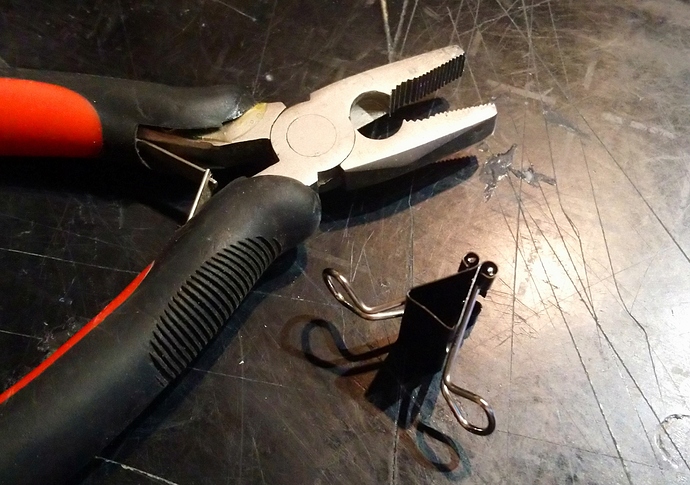 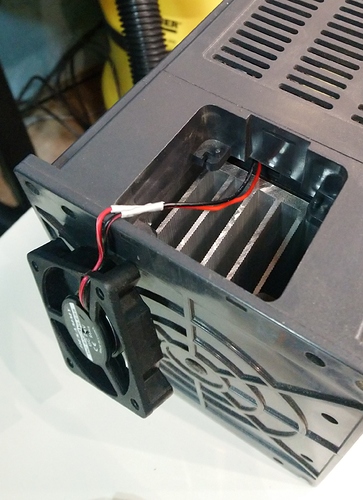 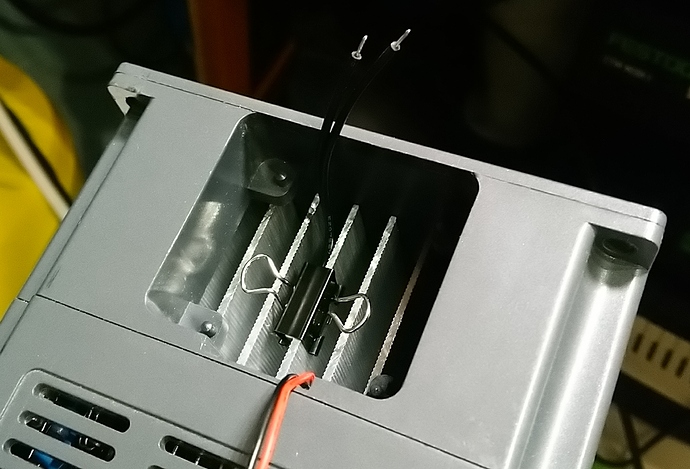 Honestly the fan doesn’t both me much.

With that said. What about going water
Cooled?

What about going water
Cooled?

I had a shower thought like that a month ago, but then @Luke said

so I backed down. Seriously though, he also said

and that plus the “just use a paper clip” tip convinced me that for once I would take the easy route. I’m pretty sure that this small annoying fan is useless anyway considering the giant sink AND the fact that my jobs typically put very little load on the spindle/VFD.