This is my first post on here, even though I have been following everyones posts for a long time and find all the information on here invaluable as i’m a total novice. Unfortunately my first Post is to share that my Nomad appears to be broken. I was just running a Job and it started behaving oddly and I noticed it wasn’t moving on the Y axis so I hit the E-stop , I then tried to home the machine and it was just stuck as the far right side making a grinding noise. I checked round the back and spotted the metal cog that holds the belt has come away from the motor . I’m not sure if this has snapped from the motor or if its meant to just click back in. I’ve sent an email to support but just wanted to check if anyone else has encountered a similar problem. 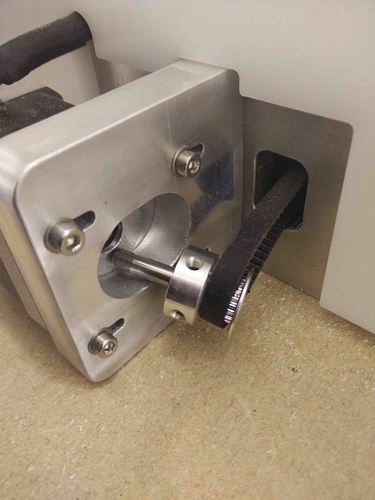 That’s a new one to me, even incl. several years of SO1/2/3 production and usage.

Should just be a matter of:

Thanks for the reply Will , I’ve spoken to Jorge from carbide and they are sending me out a new motor and will skype me on how to fit and re-tension the belt.