So I have had my Nomad for a couple years now…and I love it. Customer service is on point as well.

I have recently run into some heat issues with my spindle. I’m cutting soft material, running as normal feeds and speeds…not long run times…and the spindle is so hot I can’t touch it.

I contacted support and they sent me a new spindle thinking it was bad bearings. New spindle installed and I am getting the same issues.

The hottest part to touch is the collet nut…it will scald my finger after a couple seconds. The spindle shaft gets hot, and the motor gets hot…but I can rest a finger on them no problem.

So what do you guys think? More bad bearings?

Sounds more like you’re running with speeds/feeds with a lot of rubbing going on. If it’s not the bearings, and the tension is set ok between the motor and the spindle (pretty hard to get wrong), that leaves rubbing on the tool. It’s hard on the nomad because it just doesn’t have a lot power to cut fast with and avoid the issue. Are you using speeds/feeds/DOC out of the cheat sheet, or just what you’ve always used?

if you can try checking the amperage draw on that unit, make sure its not pulling to many amps… the spindle may be going out, and because of the pending failure its causing the over heating issue.

He just replaced the spindle cartridge, and that’s where all his heat is, not in the motor.

If you have access to a thermal camera, watch the problematic job.

If the heat starts at the tool and collet, then it is tool rub.

If it starts up in the cartridge, it is likely bearings or belt tension (causing bearing overheat)

If it starts at the top by the pulley, then it is belt friction, maybe due to misalignment or tension, or a badly worn belt rubbing the teeth.

If you don;t have access to a thermal cam, you might be able to borrow one (clip on for a smart phone, handheld unit, etc). They have become fairly inexpensive and quite common over the last few years.

EDIT: Another thing to note is that if it is tool heating, you may find that either the collet jams up (due to tool expansion) or the tool works loose.

The fine people at Carbide sent me a replacement spindle, and I have been using it for the past few weeks. Sadly…I am experiencing the same heat issues.

Belt tension is normal (not tight, not loose…4mm flex roughly…just like the day I opened the box).

Speeds and feeds are all reasonable, I follow the charts and reccomendations and prior to the heat issue never had any problems…even when I cranked up speeds and feeds.

Tool rubbing is def not the cause. I have tested the machine by running it without cutting anything. Just the spindle spinning at 9k for a few minutes. After that the collet/tool/ spindle are too hot to handle for more than a few seconds.

I worry because I use the machine daily for my small business. If anyone knows of another spindle I could purchase to swap out this one that would be awesome.

Until then…hope I don’t fry the machine or burn down the house! Ha!

Something is wonky here - mine runs quite cool. Did support have anything to say?

If you haven’t already please write in to support@carbide3d.com and we’ll do our best to help you sort this out.

Yea it’s strange. I contacted support and they sent me the replacement spindle. I feel bad asking them to send me another…they are so nice at Carbide!

Hey Will! I sent an email a couple weeks ago but hadn’t heard back yet. Like I mentioned in the email I’d hate to have you guys send me another spindle. But if there is anything I can do to trouble shoot I’m all ears!

I picked up a IR thermometer and after approx 10 min cutting nothing but air, I was getting about 107 degree reading. Hot…but apparently in the OK range. After 1.5 hours of air cutting I am getting close to 150 degree reading on the motor and 125 on the spindle. Has anyone else taken readings on their machines?

The motor temp seems at the high end of what I would expect for no load, but not absurd. Even without a load, current is flowing through the windings and there will be I^2R heating. The motor in the Nomad has no heatsink, so I would expect reasonable temp gain.

I just started a test with a thermocouple on the motor and one on the spindle body, and will post values in a little while. 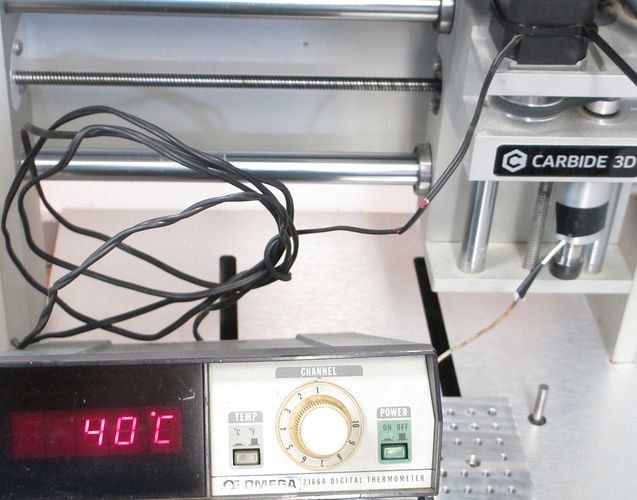 (pic of setup once I got it running)

Fluke (Omega marked) 2166A. Had to switch back and forth between channels. The unit is not in calibration, but cross checked with my good stationary temp sensor (I should probably do a full calibration on it at some point, but I don’t use it much), so I’ll go with it.

Environment temp is 34 degrees in the workspace. Initial temp for the motor and the spindle also 34 degrees.

I checked the temp at the bottom of the cartridge at the termination of the hour, and it was also 45, and ran the thermocouple 30mm into the spindle and measured 56

What this says: 54C is about 130F, so the motor is in the same general ballpark
45C is 113F, again about what you had. This is in the realm of what I would expect. The motor is putting work into turning the bearings.

The internal temp of the spindle is a bit higher than I would have expected, but not terribly so. The only path out for heat is through the bearings and along the spindle to the small exposed surface at the end. I would imagine that the bearing temperatures are about the same, and this is a pretty reasonable temperature for a good bearing. SKF specs the seals for continuous running at 100C, and max to 120C, for most of their sealed ball bearings. The other parts are 120C or higher. The lubricant is also in the green to well over 100C (see: http://www.skf.com/us/products/bearings-units-housings/ball-bearings/self-aligning-ball-bearings/temperature-limits/index.html )

I did not measure the temp of the dummy tool in the collet, but it wasn’t uncomfortably warm when I removed it.

The only thing I don’t have a good idea about is the scceptable operating temp for the motor, but I would expect that it is at least 90C, as the lowest class of magnet wire is 90C. IEC starts classing at 120C. A reasonably well designed motor will get the heat out pretty well, and the windings will not be terribly hotter than the case under steady, acceptable, loading (overload, on the other hand…)

WOW! Ok, I feel a little better now. I can live with “uncomfortably warm”, ha. Thank you so much for taking the time to run the test, I am very grateful.

For anyone that is interested, After extended running (about an hour) the spindle cartridge is running 102F, the body of the motor is 136F, and the top cover (where the hall sensors are) is 99F. The back aluminum panel that serves as the heat sink for the boards is 92F. The stepper bodies I can reach are 104F.

Well…after testing the new spindle for about 3 weeks I think it has bit the dust. I’m pretty sure it is bad bearings. Today I ran it for about and hour doing some fairly light cutting and the I could hear the bearings grinding. Still very hot to the touch…even though I’ve been told it’s normal by multiple people…I knew it was something wrong.

I bought a new spindle from Carbide and it should be here this coming week I hope…fingers crossed it’s got good bearings!