Using new version of CC for the first time went to save G code and is has output units of measure inch/metric… does it make a difference which one is picket?

not really, but using metric for G-code is slightly better just because the same number of digits grants more precision (tinier distances)

using the new version of CC. created the file saved g code and went to run it. loaded fine no problem. Hit run and machine goes to top left and starts cutting; however I was able to stop before cutting. Everything is set for bottom left probed from bottom left Tried 3 times same thing. Re-designed in old version and worked fine.

Can you upload the g-code file?

That looks fine, with zero in bottom left.

Is this the file from the first three times, when you had the problem? If so there does not seem to be a problem at CC level.

okay no clue what the problem is attached are both the cc and cm files. created using 514.
first time using it. every time I load the cm file go through probing. i probe the x y z using cutter 201 probe set in lower left. then probe the z using 302 with probe set on top of material. Go through the process ready to start cut and the router doesn’t go to the lower left like it should. goes 2 times to the upper right

my question is since using the new cc version does that have anything to do with the version of cm im using?USMC BULL DOG 302 new version.nc (172.5 KB) bull dog new versin.c2d (279.0 KB)

Sorry for the delayed response, it was the middle of the night here in Europe

I wonder if what surprises you is not just the location where the toolpath starts ?

I had a look at that last G-code file and it is still correct, zero in the bottom left corner, 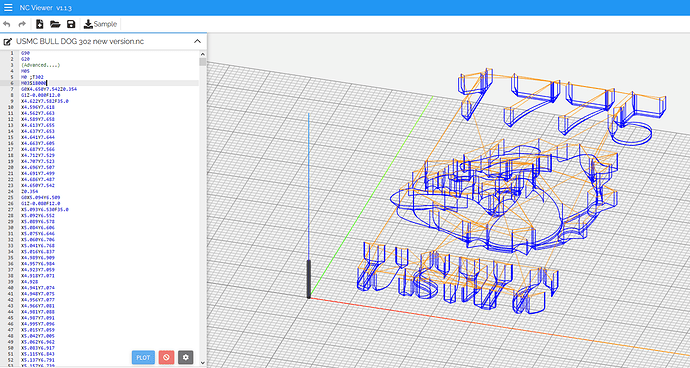 and then in the very first lines the endmill will move to the “ear” of the dog, which is where it happens to start the carve (see vertical black line, which represents the endmill): 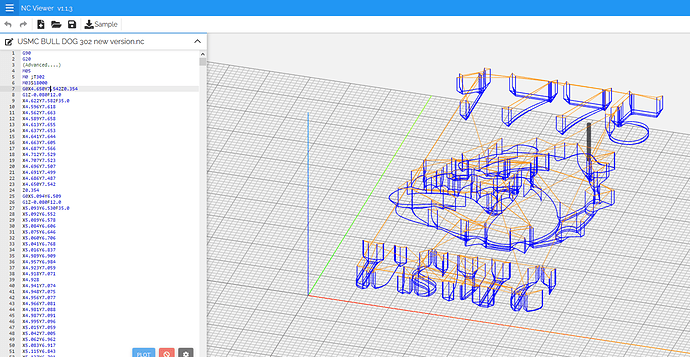 while in the previous G-code file you sent (USMC BULL DOG 302.nc), the very first move was somewhere else (top left of the “1”): 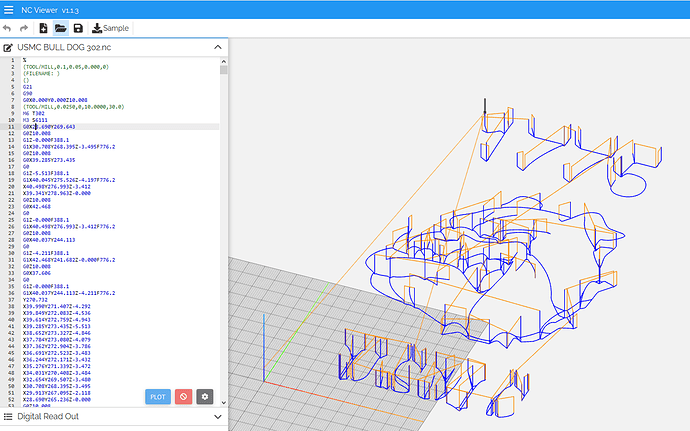 It is quite possible that depending on CC versions, the generated toolpaths will not start at the same location, depending on how the generation logic might have been modified between versions.

You could artificially set Z zero higher up than where it needs to be, and then run the job, which would result in an “air” job but if you let it run you should be able to tell whether it proceeds to run correctly.

Okay I will give it a try and let it run will see what happens. Just through me off when it did do like the old version did. Will let you know what happens. Thank you

Okay I loaded the file again and let it run. All went fine came out great. It didn’t start at the lower left but worked fine. Ran it a couple time and each time it started in a different spot but each time it came out fine. Thank you for all the help.

do you know “camotics” and “ncviewer” ?
they’re great tools for previewing gcode and for sanity checking…