Still trying to understand what I’m doing here, making a very basic pocket cut (pocket around text) and all goes well. After around 74% of the job, the bit plunges all of a sudden about 6 mm deep and ruins the cut.

2 questions, why is even a simple thing like this going wrong and what am I looking for in the Gcode to find the mistake in the code? (using CC+CM)

Can you post your files so we can look at them?

Done! I’m trying to find what happened and why…

One implied problem could be a static discharge. Does this happen consistently or just this once?

To be honest, it did happen before on another little test project. I came from a little SainSmart 3018 CNC with Easel where I never had any problems like this. Now I have a 4XL with CC&CM and I’m running in all sorts of mistakes. I know I must be doing something wrong here and I’m trying to understand what…

The nc file looks okay. Maybe posting the Carbide Create file might help a little too?

People on the forum have had this sort of mid-job plunge because the endmill comes loose in the collet and “drills” itself into the stock. You can check for this by marking your endmill with a sharpie when it’s been put in the collet and checking to see if the mark has moved.

Good idea, I will…

I have never seen a negative value here before and RED color indicates something is wrong. Have you watched any of the training CC videos? 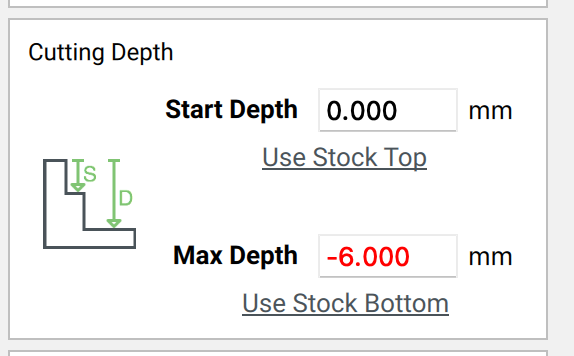 I have and I will watch them again… but never had these problems before with Easel. But, I’ll go back to the videos…

edit: I see that I didn’t upload the right file… never mind, I’ll go back to the videos… Thanks.

If the behaviour is random it’s most likely a wiring issue which has developed since you were using Easel.

Please check your Z-axis motor wiring and wiring connectors — if you don’t find anything obvious to address, write in to support@carbide3d.com and send us photos of the wiring.

I got the impression that Easel was used only on a SainSmart 3018, but now Jaap has a 4XL with CC&CM. Jaap can maybe clarify if he’s used Easel on the new machine.

Jaap can maybe clarify if he’s used Easel on the new machine.

Yes, I have used Easel on my 4XL. To be honest, I have been going back and forward between CC/CM and Easel which I shouldn’t do. I’ll go back to the drawing board and stick to CC/CM…

We have an article on this:

as noted above, add to that Z-axis wiring issues — usually if this is the case you’ll hear an odd noise as the Z-axis tries to lift, fails to (making an awful noise) and then, thinking it is higher than it is, plunges deeper than it ought.

I’ve read the article, thanks! I have ordered the bitsetter v2 yesterday but it’s very hard to find one here in Europe. (I’m in the Netherlands and trying to get one from Belgium right now).

I don’t think it’s a wiring issue, it didn’t occur all the time but when it did, it was with CC/CM. What I need to do is make up my mind and choose between the different software options instead of going back and forward to different applications. Easel is pretty easy to use for a beginner where CC/CM gave me weird results sometimes. Why I don’t go back to Easle pro? They have increased their pricing again so I kind of went back to CC/CM.

Have you been using the Easel machine controller or CM to control the machine? Easel is known to change Z steps/mm on other machines (interestingly, even some X-Carve configurations), the resulting value seems to be based on what the initial setup is. From some reports it always changes $102 (does a $102=xx), but it will be to the correct value if you’ve configured the machine the way it wants. If you have used Easel’s controller can you post the current values of $100, $101, and $102?

It’s a common 3018 problem, discussed regularly in the 3018 FB group, so you may have heard of it before. Still making flight simulator panels?

I’ve seen reports of Easel being used on a lot of machines, from 3018s to Maslow CNCs. Even X-Carves on occasion

Never tried it, though

Have you been using the Easel machine controller or CM to control the machine?

All I did was making flightsim panels but that’s easy, just cut-out shapes for the hardware. Now since I have the 4XL I want to learn and make more stuff starting with new nameplates for my boat!

It’s the ease of use for beginners like me, it gives you a step by step guidance of what to do, even with bit changes in the middle of a project. But I’ve ordered the bitsetter v2 and I’m gonna focus on CC/CM now.

Yes, 200 is the setting you will get if send the configuration for a Z-Plus on either an SO3 or SO4 or Pro.