One Shapeoko XL, coming up

Came back from lunch and there it was, a big box of Shapoko XL on the porch. O frabjous day! Callooh! Callay!” [insert happy dance here].

Because of the afternoon delivery, I’m only part way through assembly. I ran out of shop time as I was fastening the aluminum extrusions to the base. I’m making some notes to feed back into the instructions but haven’t run into anything major so far. Compared to what I’m used to with 3D printers these instructions are wonderful. Of course, they were written in English to begin with rather than being translated into English by someone whose sole reference was “Enlish as she is spoke.”

It’s alive!!! Hello World file run. I suspect that I will need to re-tighten the belts and adjust my cable management a little bit but it works. I had one limit switch on the wrong side of its bracket which caused homing issues but that was easy enough to sort out. Other than that, pretty smooth sailing.

I had one brain cramp moment. I had the machine jogging around the wasteboard, turned the machine off and went to lunch. When I came back, it wouldn’t respond to the jog buttons; it would just click. what happened. Oh yeah, you need to set the increment. Jogging around the wasteboard at a .01mm increment doesn’t work very well. Sigh! Learning Curve. 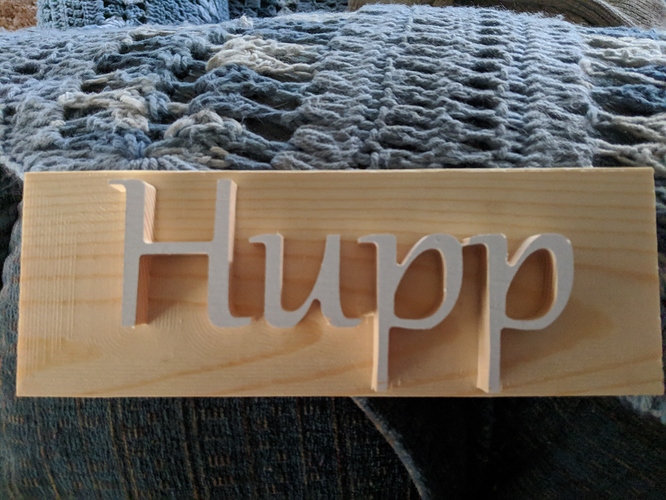 Technique for doing that with a V carve: https://wiki.shapeoko.com/index.php/Carbide_Create_Basics#Clearing_area_around_drawing

Thanks, Will. One of these days I’ll learn to look for an easier way to do something before just brute forcing it.