What’s the file extension? Change it to .nc

It is .nc I don’t think Carbide Create let’s to export in any other format

I don’t use Carbide create, but I thought it exported .ngc or something. They’re all just text files. Can you share the file? (I can’t take a look… Away from computers for a week, but that will help the next guy) 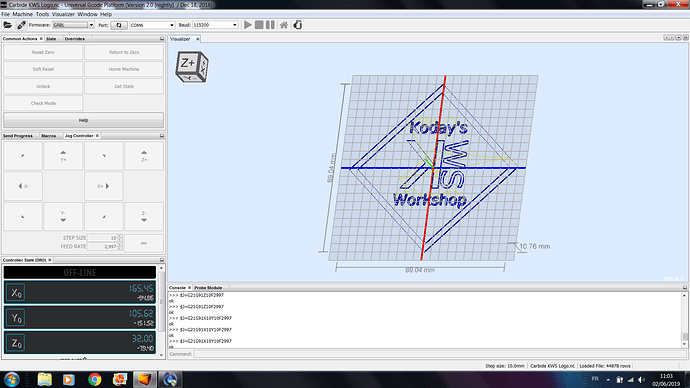 On the PC you are running UGS on, can you open the file in a text editor and see its text content correctly?

I’m running windows 7 pro for and os and it opens nothing. I can open the text file and it looks fine to me, just like any carbide create file i’ve used before in candle, but UGS reads NO code that I’ve exported from carbide create

Mysterious indeed. To try and troubleshoot what’s going on, you could check if UGS spits out any specific error message on the command line when you try to load the file. From a command shell, you can use the “–console new” option, it will open a separate console window, which will happen to contain all traces that UGS makes behind the scenes:

Here’s what the output of launching UGS then opening your file produces, on my computer :

There is a (small?) chance that you could see a meaningful error message there

The other possibility is to file a bug report on the UGS forum, attaching the file, mentionning the version of Windows + UGS you are using ? But since I can open it, most likely others will too, so I suspect this is lead nowhere.

Have you tried changing the extension from .nc to .gcode?

I tried this with no different out come. Sorry for the late reply I’ve been busy the last few days

Looking at that video:

To reinforce what @Julien says, use the version at . the UGS site that is the “nightly” version. It’s actually the most recent release from December, they haven’t actually fixed their nightly builds.