I have one lower wheel on my X-Axis that no longer touches the rail.

The easy fix would be to find an oversize wheel (I’m thinking 0.5mm).

Before I spend the time making a larger replacement weel, has anybody ever seen any oversize (plastic) V-Wheels for sale?

FYI: I posted this on my Instagram, and find that I’m not alone with this problem.

I’m not sure if these are any different - but Mr Beaver tends to make heavy duty stuff:

Unlike ball screws and linear guide V wheels can wear out. As a result we offer replacment V wheel kits. 4 V wheels complete with bearings and precision shim pre fitted. These are the heavy duty V wheels - not the standard that come with...

Well, the wheel that is on there (presently) is new…so it’s not worn…and to be honest, this problem has been there since it was new… 3+ years.

Maybe a more eccentric eccentric? Or ream the plate and tighten up the hole with a custom bushing? If it’s been that way from the start it seems the hole in the plate is off a touch? Probably a few extra skinnings left in that cat. Mr. Beaver sells some eccentrics that have a deeper shoulder to engage more of the plate surface (I have a set around here somewhere that I’ve yet to install). Other than that if you have access to a lathe and a chunk of Delrin a larger wheel could be made pretty easily, but it seems that the root cause is the plate hole.

I don’t make any over size wheels I’m afraid. I could send you some HD eccentric nuts which have a slightly larger offset? Not sure if it would fix things or not.

Have you checked in w/ the folks at Carbide 3D? Seems to me the problem is the hole positions on the plate, either for the wheels, or for the Z-axis rails.

No, I just lived with the problem…it’s clearly an out of location hole (lower right) on the X plate. Back when everything was new it had a tiny little bit of friction onto the rail, but as the top wheels have probably worn a few thousands, it has left that one wheel hanging free.

I’ve done the math, and you can’t get more than a few extra thousands out of an HD eccentric nut due to the hole/thread size, and I’d like to see at least 0.020" extra movement on that wheel, so that’s not a long term fix (IMO).

Guess, I’ll be making some OS V-Wheels and putting them on my Etsy store for the few dozen other users that have the same problem. This is the simplest, easiest, and cheapest fix to this problem.

EDIT: As I put more thought into the root cause, I NOW think the top two holes are out of location, because in the very beginning, I had problem with the two belt follower bearing digging into the top rail…which would place the bottom V-Wheels lower… Doesn’t matter in the long run, because I really don’t want to change the X plate…even if it’s slightly incorrect. ((Everything is dead square and performing perfectly…except for that one darn wheel))

The first prototype Oversize V-Wheel works awesome. The V-OD is 0.050" larger than the stock wheel (measuring this feature with two 1/8 dowel pins and an OD micrometer); ALL other dimensions are stock, so you can reuse the old hardware. I would like to see how a 0.060" oversize works, and will report back with that prototype.

.
Measuring the eccentric nut movement at the V-Wheel 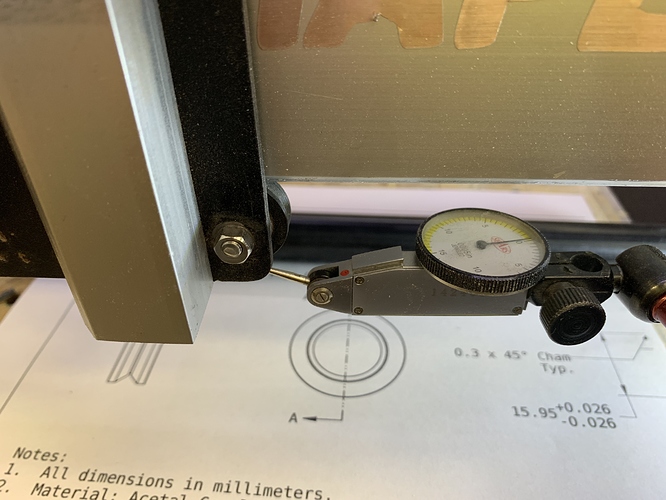 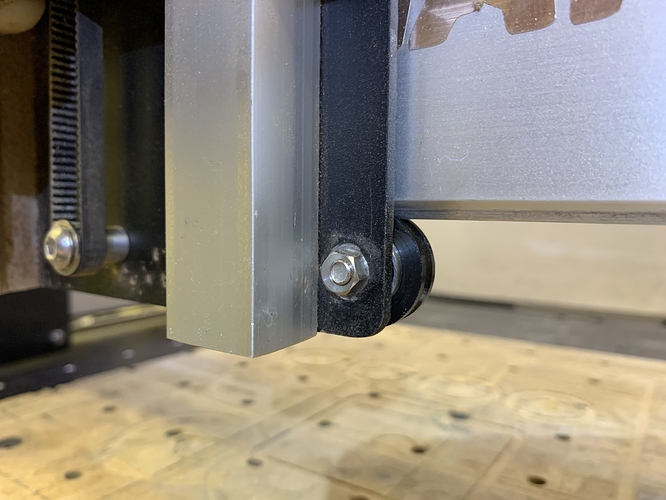 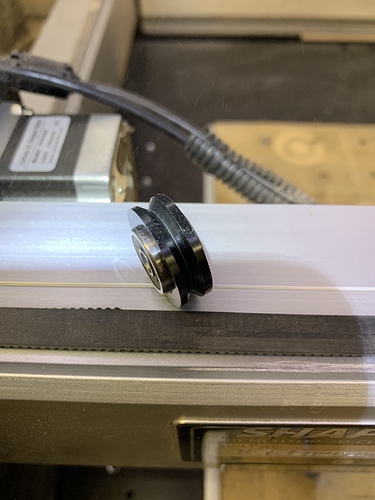 Nice job. What sort of machine did you use? 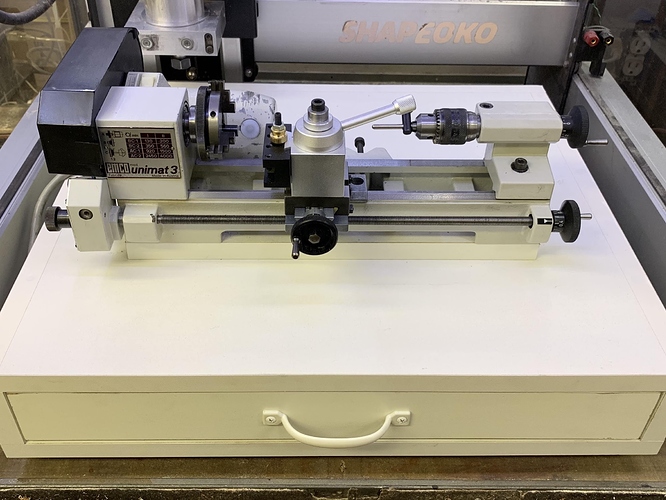 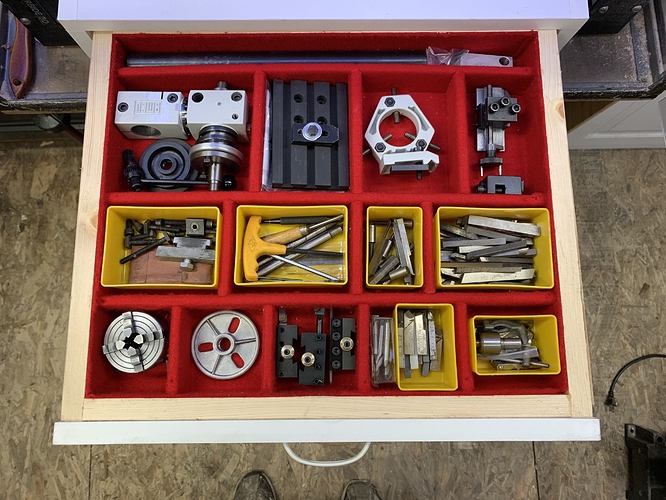 What material did you use for the wheels?

Sure (but it’s a short story). After searching for over 3 years, I finally found a near new (old) lathe. It was a single owner who bought it to make wooden pens. That means that most of the extra equipment was never used. Example, 4-jaw, steady-rest, the milling attachment, etc. He had past away and his wife gave it to their neighbor, who put it up for sale.

While it dirty with wood resin, it is otherwise in near new condition. I did a 100% dismantle, to inspect every part, and cleaned it up using (only) WD40. There is near zero wear on the bed and cross slide (which means it didn’t get a lot of use). The spindle runout is less than 0.0001 which was amazing. It was made is Austria around 1976.

I added the Aloris style quick change tool post and a pretty white (HDPE covered) stand with a felt lined drawer to store and preserve all the accessories.

Same as the original as made by Carbide3D: Delrin plastic.

I really enjoyed turning on a lathe, and would really like to get back to that sort of thing — hopefully I’ll at least manage to work up an indexed 4th axis for one of my machines presently — want to try making some threaded dowels for a workbench vise.

I’ve thought of getting a similar tool myself but my use would be so limited that it just doesn’t make any sense.

Well, I have a vast watch collection that that I seldom wear…same thought I think…meaning I don’t mind adding quality tools to my shop, even if I only use them 1-2 times a year.

R&D is completed. Here’s the ONLY critical dimension you need and HOW to measure it. I recommend this dimension for the oversized V-Wheels be a1.100” +/-0.005” ALL other dim. come the Standard (size) Drawing and is available on the web. PS: Dowels are standard 0.125” Matl: 1.0” Delrin (McMaster Carr).

Now you have everything you need to make your own and a really simple fix if you have loose V-Wheels! 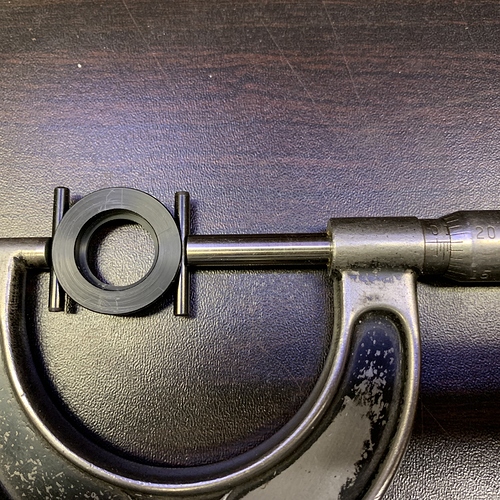 that lathe is a beauty

Now you have everything you need to make your own and a really simple fix if you have loose V-Wheels!

…if you own a lathe.