This is a forum dedicated to CNC machine but some jobs in the shop are simply better done the old fashioned way. I have planners, jointers, bandsaws but sometimes a good old hand plane or chisel is the best and most efficient way of doing some things.

I am curious how many folks have a machine as their only, or primary power tool — that’s certainly the case for me — I have an old circular saw I’ll haul out for breaking down stock at need, and a small track saw which I use more frequently, and a pair of drills (one cordless, the other corded) which I’ll use for drilling holes.

Usually haul out hand tools, esp. when a task is presented which they are well suited for: 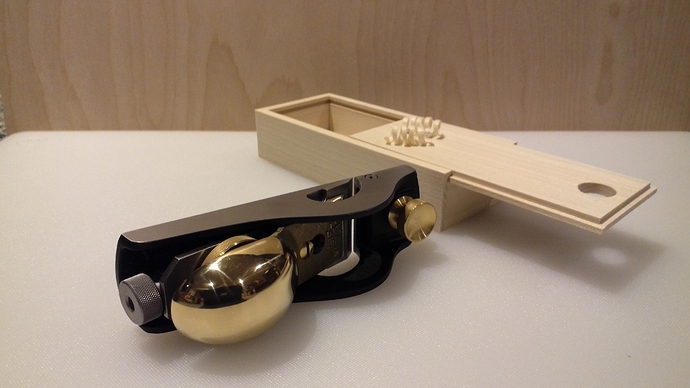 (and for those curious, I used that block plane to make a small piece to glue onto the lid to replace the wood which was wrongly cut away)

Nice plane you’ve got there…

Thanks! For those who are not hand tool aficionados (or cognoscenti?) it’s a Lie-Nielsen No. 60-½ Rabbet Block Plane with Nicker — Lie-Nielsen being a well-regarded contemporary manufacturer of woodworking tools (eventually I need to do a pilgrimage and visit their production facilities when they re-open them to the public).

I have a fair collection of vintage and modern planes (and have given away a few more — my son got my very similar but not rabbeting vintage Stanley) — I should use my Bridge City Tool Works HP-8 more often, but it’s in the box for my v2 Chopstick Master and isn’t as convenient to access, plus it would entail removing the depth skids — I keep telling myself I don’t need an HP-8X Celebration Edition Mini Block Plane, but may not be able to hold out.

Anyone who works with wood and doesn’t have a good-quality, well-tuned plane is really missing out — a vintage Stanley or Millers Falls or Record plane can often be picked up very affordably and tuning one up (fettling is often used to describe the process) is a pleasant activity if one likes working with tools — highly recommended.

I have a couple of Lee Valley Veritas tools, and have been very impressed — the aesthetics of their planes doesn’t appeal to me for most of them which really saddens me (but probably won’t prevent me from eventually getting a full set of their miniature tools when I retire: https://www.leevalley.com/en-us/shop/tools/hand-tools/miniature-tools ) and their router plane and medium shoulder plane and shooting board will probably be my next two tool purchases, but it’s the Lie-Nielsen shooting plane which I’ll be getting when I finally have a dedicated working area.

Funny mentioning “power” tools, and you are the power in the tools you mention!

I don’t even have a set of chisels (yet); let alone a block plane. I spent a lot of my wood life working with caveman tools, because my focus was on a different kind of success. Now I have the best power tools I can afford; table saw, band saw, drum sander, belt sander, drill press, various hand-held drills / grinders, and last (not least) Shapeoko 3 XXL. (Someone elsewhere called us “sanders” sissies!

I try to design things that don’t need to fit closely, but joints are always an exception.

My reasoning is that if I can’t get close enough with good power tools for a sanding process to make something fit, I need to cut it over or redesign it.

Yeah, it seems the case that for a fair number of our customers the Shapeoko and trim router are their first/only power tools which is why I’ve always tried to focus on bootstrapping when I do tutorials such as:

Yeah, if the licensing were more open, and the app billed as more generally useful I’d be inclined to look into it.

Could it be a CLI tool?

Launch a terminal window, navigate to where the .exe is and run it and see what it outputs to the console?

I tried it a few weeks ago and it initially started with the scary command line window,

and some good 30 seconds later (!) on my computer, the UI popped up 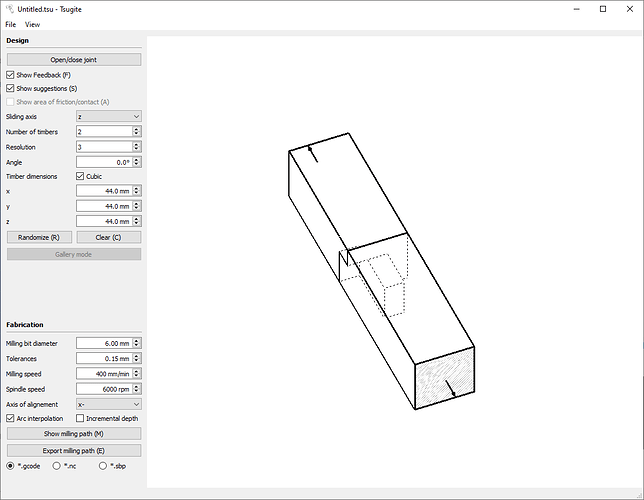 Maybe give it some time ?

I know @neilferreri had troubles when launching it on one of his computers, not on other computers.
The software seems very “alpha” (no criticism, just a fact), and may not like to run in a VM.

I tried it for a little while but it generated really weird toolpaths, so I gave up.

it generated really weird toolpaths, so I gave up.

I had the same experience. I also realized, once I saw the way it worked, that the designs would be easy to replicate in other software.
Some of the toolpaths were a mess… Things like dropping the Z over a meter.

I’m just the opposite, I’m a power tool tramp. I actually have fewer hand tools (for wood) than I have power tools. I have plenty of non-wood hand tools from when I was a mechanic, but as far as non-powered wood tools, I have a hammer, tape measure (although I prefer digital calipers most of the time), and a smaller collection of wood turning tools (which require a power tool to be useful). I had a saw and miter box once, pretty sure I gave it away? I’d have more power tools, but I have a motorcycle in the middle of my shop.

If you’ll let me know what specific joint you’d like to cut out, I’ll do my best to look into modeling it in OpenSCAD so that it can be cut out.

A study of joinery Unsupported

A Japanese technique for joinery and a software tool for it, and a paper: http://ma-la.com/Tsugite_UIST20.pdf were recently mentioned at: The specific joints of interest are Figures 28, 29, and 30: [image] (if folks want, we can move all the relevant posts here). This will be an examination to see what is involved in cutting these joints using Carbide Create.