Inspired by @StephenCox here, I decided to try my hand at a few little puzzles. I thought they came out rather nicely, and they’re fun to make.

I have some ideas for a few more - and might just continue it as a series, all using the same size base. 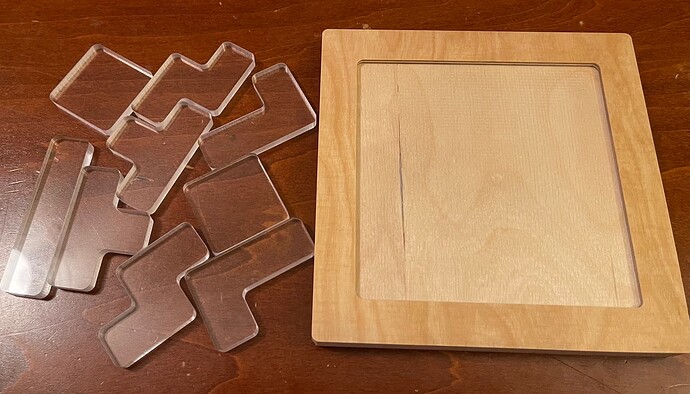 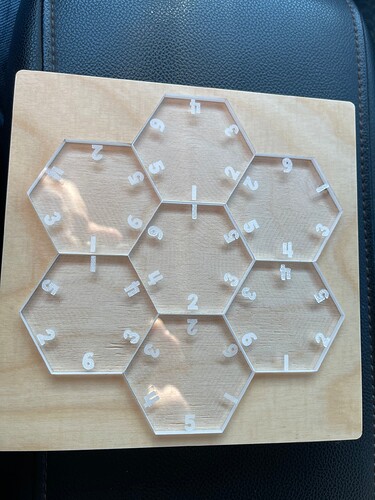 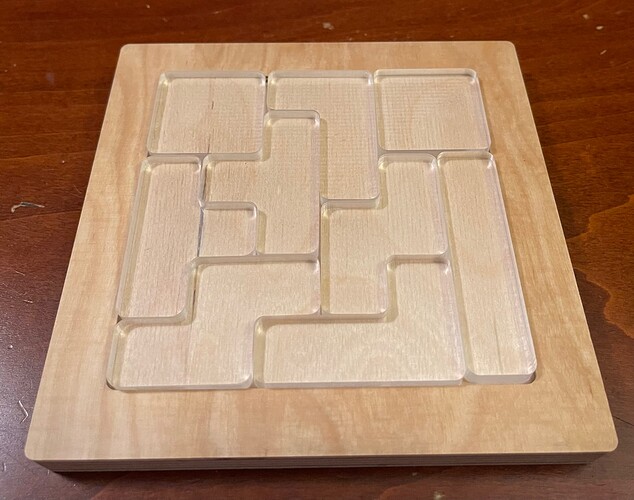 Thank you! I’m rather proud of how it turned out.

In actuality, the number combinations that happen when you lay them out eliminate a lot of possibilities as you go. It’s important to have a process. If you just match numbers at random, you’ll have a random amount of success, and I can imagine it taking a long time.

If you run through a method - such as starting every tile in the top spot with a specific number consistently facing the center tile, you’ll eliminate some layouts right away as you work towards the solution.

I too was worried that it would be impossible. And while it’s definitely not easy, it’s not as hard as you’d think. Solved it several times now in under ten minutes.

Making sets right now. Great Idea. Thanks for passing it along.

I’ve made another one based on a magic square. There are 9 tiles, and they have to be arranged in a way such that all rows and columns add up to the same number. 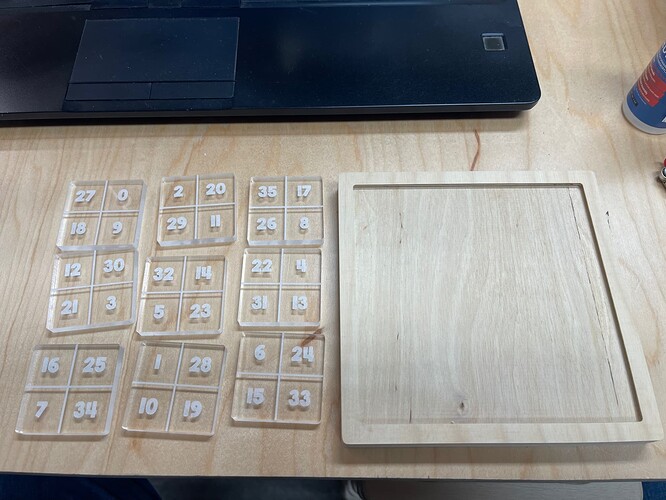 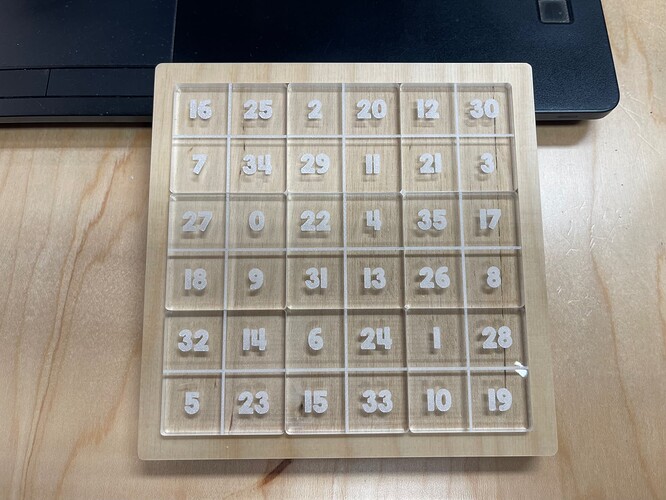 Wow and I am crying to finish the hexagon. My 3 year old grandson finish the shapes for me.

Yeah there’s a bit of a learning curve between the three so far. I think this one is slightly easier than the hexes, but both number puzzles are on the harder side. I find this one to be a bit harder than medium.

I think I’m done with numbers for now, and the next one will be a “parking lot style” sliding puzzle.

Had a power failure halfway through but was able to complete it without any issues. A little bit of tear out at the holes but not bad. If I cut one of these again, I’d have cut the holes first and then the maze. 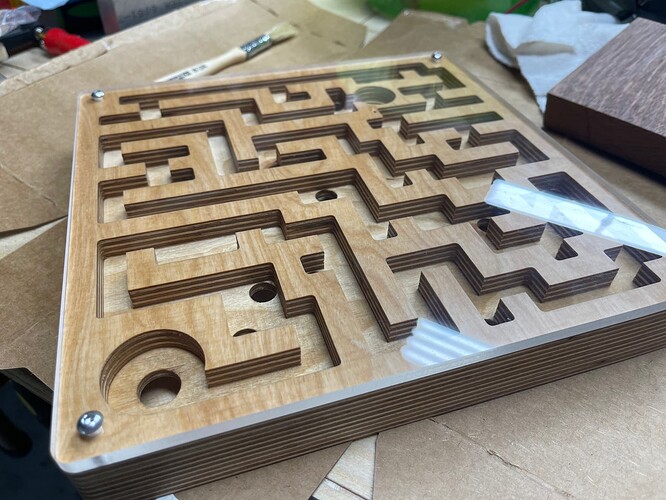 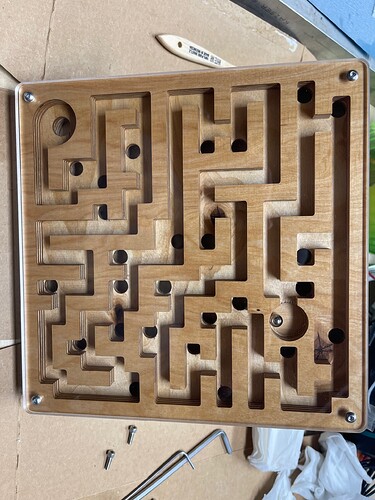 Nice! What does the base layer look like? Do the holes return the ball to the start?

The bottom isn’t very exciting tbh. It’s mostly an open pocket tray, but the perimeter of the walls of the pocket are contoured to only have to cut enough out to allow passage from the holes. They come to a point at the start hole to guide the ball back to the front layer to reset the game. 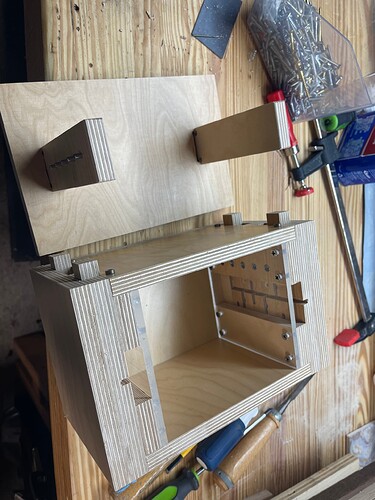 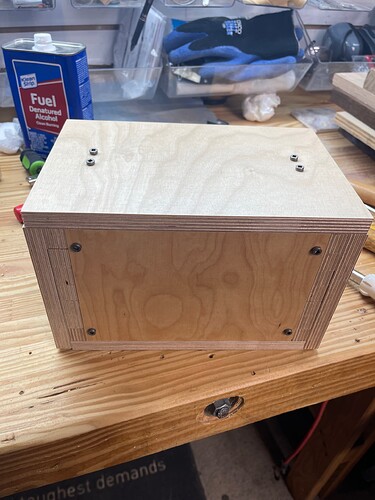 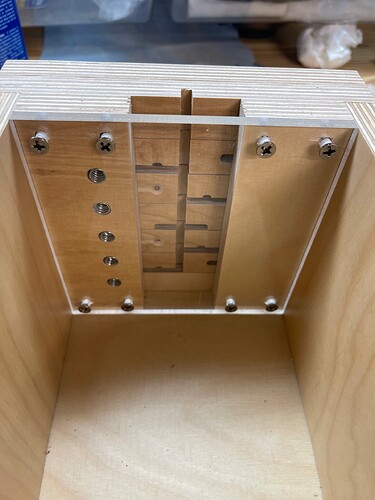 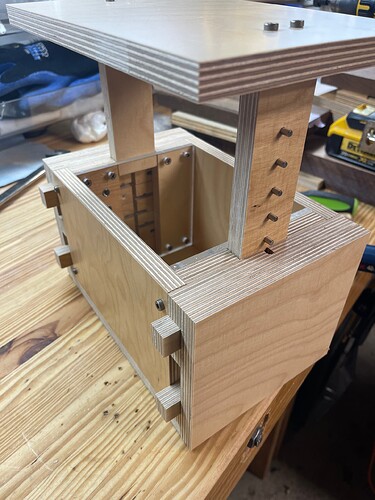 This style of puzzle box has been floating around on the internet for a while, but I drew one out that I could cut with the shapeoko. When I have time I’ll smooth it out a bit, and sink the screws, and add some clues. Came out ok. 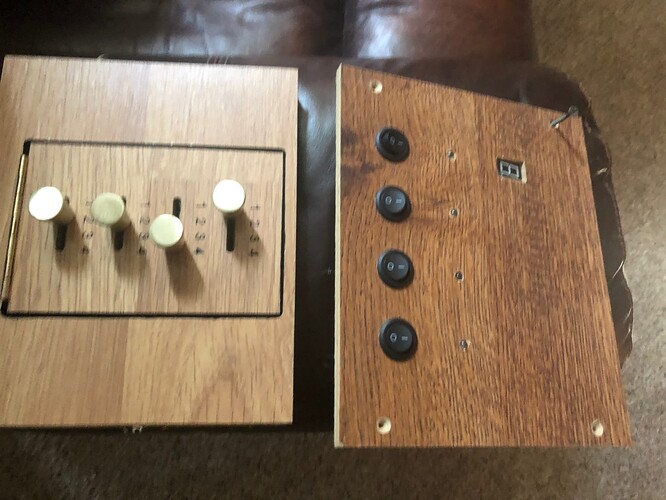 The one on the right is a binary to decimal translator. the correct sequence of ones and zeros makes a number. more of electronics project than a woodworking project but I didn’t make the panel with the CNC

do you hold down 0 or more buttons on the 2nd one? How do you enter the number? Or is it just one number? (15 permutations

do you hold down 0 or more buttons on the 2nd one? How do you enter the number? Or is it just one number? (15 permutations

I was confused by this as well.

It should require a two digit display and run from: 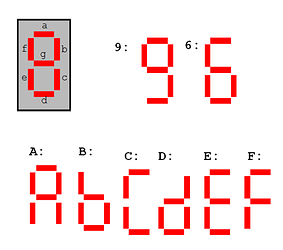 Yes, but it was described as:

The one on the right is a binary to decimal translator.

If it’s hex, yes, that works, and obviously that is what it must be.

So these are Escape Room Puzzles meant to be solved in ~ 5 mins.

Added two more Binary Type Puzzles / Tricks to solve. Not meant to be to hard. There are 13 puzzles to solve in 50 minutes to finish the ER Wall.

Sorry it would not load Power Point 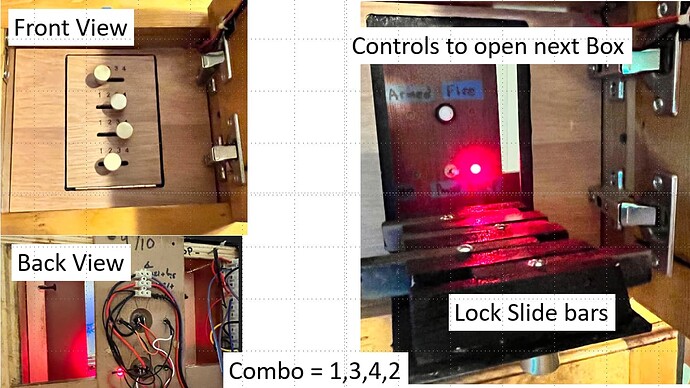 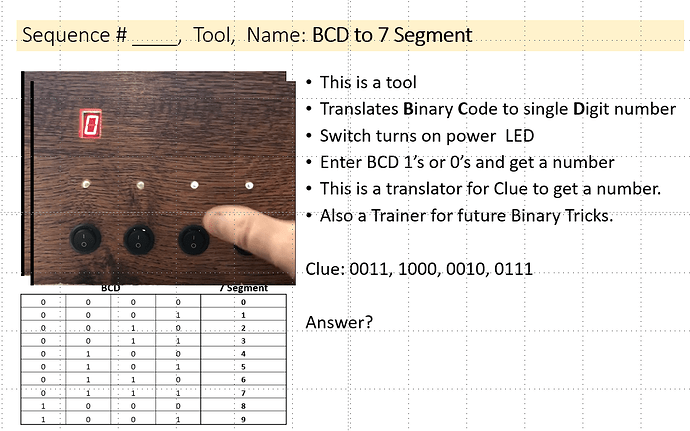 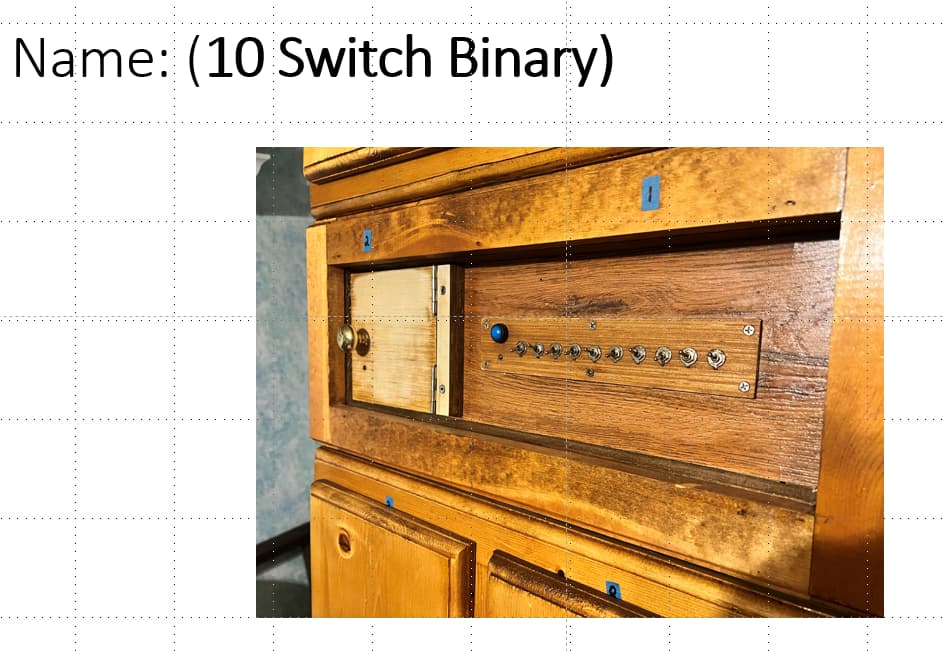 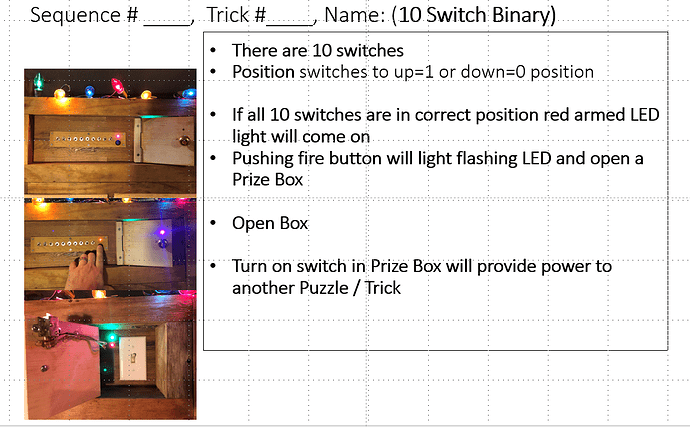 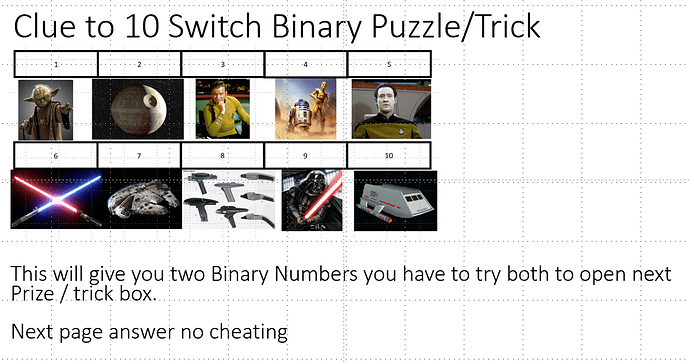 Finished the puzzle box. Eased all the edges, made a ton of mechanical and tolerance adjustments, redid the ball-bearing detent, and redid the lid entirely. Finished except for waxing the edges, but very happy with how the keys feel, they click into place in a satisfying way. Thrilled with the final puzzle.

Not great with making video but here’s the solve.

Some finished photos plus what the initial cutout looked like (not including the two plexi pieces, and the lid and handle assemblies that were recut later) 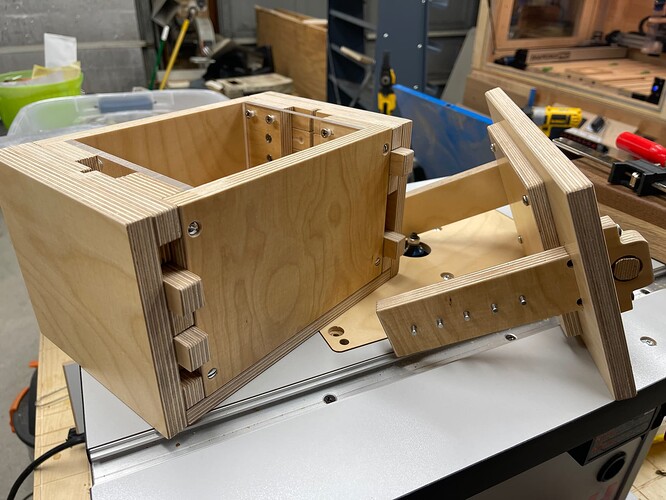 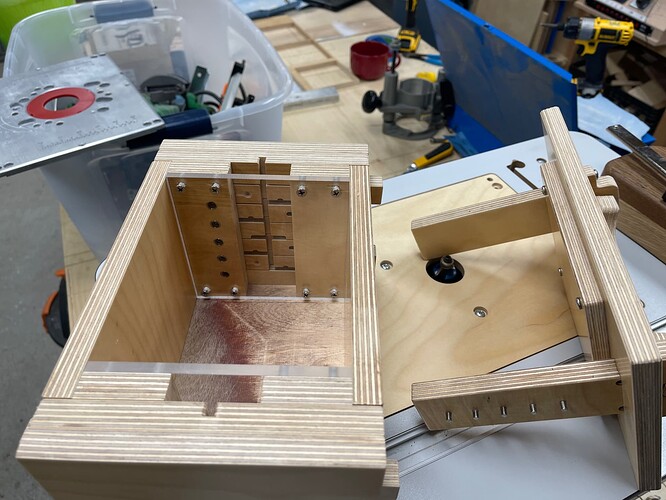 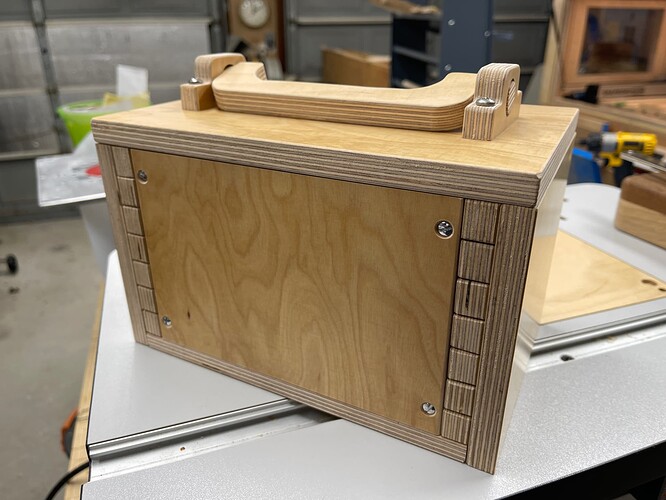 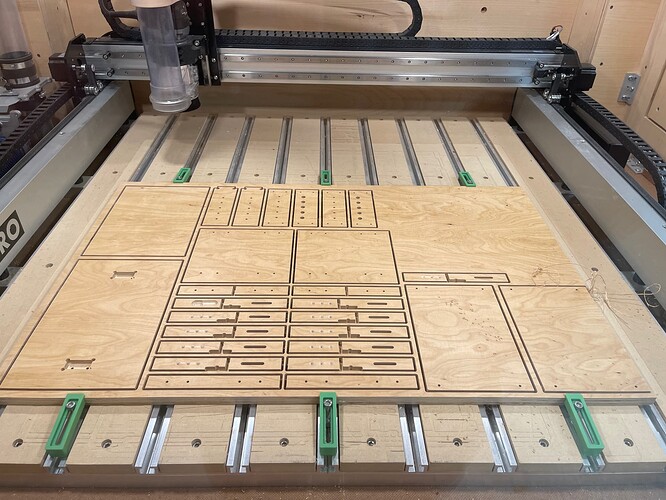