I really enjoy doing vcarve inlays, and through some good old trial and error have come up with my own somewhat reliable process for doing them. But I feel like it’s probably more than a little inefficient, and wanted to see if any of you guys have had the same challenge that I have.

My issue is primarily around removing the inlay backing after gluing my pieces together. I use my Shapeoko to remove the backing, and would often get a bunch of chipping when doing so whenever there are fine details or sharp corners at the end of the removal job. And of course if it chips below the surface the inlay is more or less ruined, which gets very frustrating.

My solution is a bit tedious. First, I make sure my inlays only have about .05" of backing material. Then I use an 1/8" end mill, and slowly shave off about .01" of the backing at a time until I’ve got it surfaced. I’ve gotten much better and more reliable results this way, but it is slow.

And then I watch videos like this, where the dude is tearing through an incredibly complex inlay with a fairly thick backing, surfacing the entire thing in one go. And then I feel like there must be a better way than how I am doing it

If it were me, as soon as I got to the tips of those swords (doing a y axis raster) I think I would almost inevitably get some chip out.

And here is an example of a piece I just made today, using my refined (but very slow) removal process I described above. I kept blowing those sharp corners right out when doing it with a .25" bit! 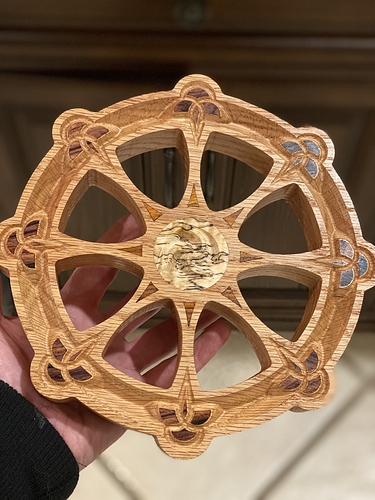 Have you tried using a downcut endmill to shave off the backing? Since it pushes material down, you should be able to get rid of any tearout/chipping.

I don’t know about you, but one mistake I made early on is relying too much on my “trusty old 201” that came with the machine, before I realized that I had abused it to a point where it was dull. And then you cut bad cuts and more tearout than you should. I’m not saying this is what happens to you, but…

Haha while I can sometimes lean a bit too far on the 201, I’m usually pretty good at replacing them once things start getting a bit fuzzy

This one is just a couple days old, so should be plenty sharp.

And I did try a downcut, and it actually seemed to make things worst! However, I am not entirely sure if that one is as sharp as it should be, maybe I’ll try again with the one that’s been sitting on deck.

The problem occurs right.at the end of the job, when the end mill moves off the inlay and into backing-only territory, which is hovering .02" above the main piece. The downcut bit seemed to really make a mess of things here.

Someone on Facebook mentioned trying to cut it a bit deeper than the main piece, I wonder if that would help. I’ve been intentionally cutting it a bit shallow, .005" or so, so I can do a final leveling pass. Maybe that is my mistake?

And you know, it seems like the obvious answer might be to eliminate as much excess backing material as I possibly can. I’ve been cutting my inlays into small square tiles, so there is still quite a bit of excess. Maybe I need to do a better job cutting them out as close to the inlay profile as I can.

How generous are you with the glue ? Now that I think about it, I tend to make sure it overflows everywhere when pressing the inlay in place, with a large enough cutout gap to accomodate it. And then let dry long enough to be really sure it’s hard, and finally yes I do shave off an extra (small) depth of the piece’s surface.

Pretty darn generous with the glue! I am also experimenting with carpenters glue vs. CA glue, and it seems like the results are pretty similar when I use a .25" single pass (bad) vs. .125 multiple pass (ok, but more time consuming). Which is cool, because CA glue is a lot quicker!

For me there could be many reasons…
The edge of the forest, (the number of teeth also 2 or 3, I noticed differences in the behaviour of the drills)
Wood (there are some woods that are more brittle than others… like oak for example, compared to walnut which is softer),
and the senses of your machinings. Try to machine in the direction of the grain of the wood

(sorry for my bad english…)

The problem occurs right.at the end of the job, when the end mill moves off the inlay and into backing-only territory, which is hovering .02" above the main piece

I should have read that twice before answering. So the problem is not actually the surfacing cut in the inlay area, but rather that the cut can go crazy (regardless of the endmill) when cutting a thin layer of wood that is hovering over the surface. It’s not held by anything, can start vibrating etc…and then yes I see how it can tear large chunks of the backing material, and tear a tight corner of the inlay in the process.

A mild case of this is visible on this example of mine: 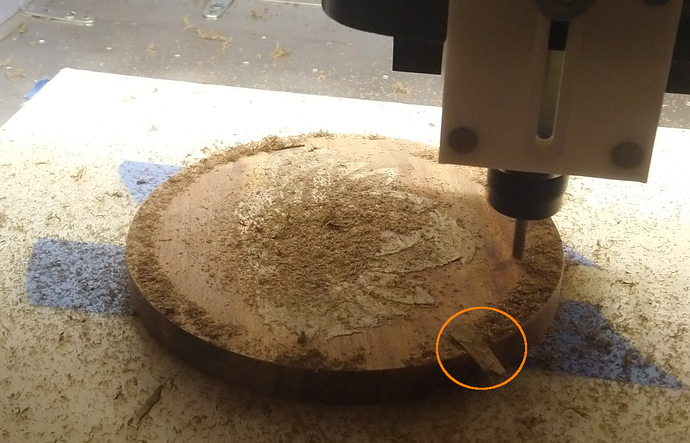 (that circled part was part of the thin backing, it went flying during the cut)
I think a remedy for this might be to use a large enough cutout gap to then go and use a bandsaw to cut the backing material manually, leaving only small pieces sticking out, that you can then surface easily (since there won’t be any overhanging material anymore…I’m not being very clear I guess.
It’s an extra step, but still faster than surfacing at small DOC with an 1/8" endmill?

What I do is use either a down cut or surfacing bit but leave 0.02” or so… and do the last part with an orbital sander. The brothers wood guy from the videos also always does the last layer with a sander

Yeah that’s exactly the problem, the “overhang” tears out and takes some of the inlay with it!

As for using a bandsaw, I am limited for two reasons:

a) I don’t have one! That’s probably the biggest limitation.

b) I still have more work to do on these pieces after the inlay, and I don’t want to lose my zero points! If you look at the wheel I posted above, you’ll see the deep “chamber” pockets, as well as the carving details around the inlays. I don’t dare to try doing inlays after doing that carve, because there is so little material remaining around the female piece.

So that’s why I’m trying to figure out a reliable process using the CNC. So far it sounds like a) removing as much excess backing material as possible when cutting out my male parts, b) trying a straight-cut bit, and c) cutting ever so slightly deeper than the surface might be my best bets to try next!

Also, thank you for talking through the problem with me! It’s been helpful.

Let us know what works out best, I’m interested !
Wild idea: run a contour cut around the male part (with some margin/offset), down to artwork plane plus a margin to avoid touching the surface: that would cutout the backing material, leaving “islands” of male inlays and no overhanding parts. Maybe just maybe that profile cut would not tear out so much, since it would cut nearer to solid material edges (if I make any sense…). And then run the final surfacing op normally.

Oh interesting – you mean running a contour after the glue up, but before the surfacing?

Maybe I’ll try to do a comparison between that approach, versus removing as much backing material as I can before the glue up, and see which gives quicker/more reliable results.

you mean running a contour after the glue up, but before the surfacing?