Been engrossed in Fusion 360 lately trying to learn–so far good, though 3-D modeling and the software is a steep curve to get around. I’m now about ready to try to run a two-sided job and I’ve watched a bunch of videos, and some things have me stumped. I plan on using a “pin” or dowel method for indexing stock (and have a pretty good idea for that), understand how to do the setups for each side in Fusion CAM, but what is throwing me is the WSC setup and zeroing in CM once that is done and before the files are run. Bear with me for this rather long set of questions.

First, in most of the videos, the recommendation is to flip the z axis in the Fusion WCS when doing the setup for the second side so that Z is up as oriented to the stock’s backside. I get that part. But in a couple videos (here’s an example at about 12:30 in) the recommendation is to “pick up” the stock on the bottom in the CAM setup rather than the top (as was done on the top-side milling operation). Now, if one does that, this generates a series of questions for me on job setup and setting zero:

Presuming Z is not reset (left alone from operation “A” side) and a face milling operation has been done (as was in this video), would that not necessitate a re-zeroing of Z since the stock would be thinner? Or is the software “smart enough” to know that a certain amount was taken off the face (which is now presumably sitting on the wasteboard?

My confusion is compounded by this video where at about 12 mins in he flips his stock, but does not re-zero Z (presumably because the stock thickness has not changed) and Z zero is in the same place for each side. In the CAM setup he picks up the WCS off the top of each side to be milled merely flipping the Z axis but leaving orientation to the top of the material.

Thanks in advance for any suggestions.

Here is an example for Fusion and shapeoko

This channel is for new Shapeoko users to learn the basics of how to use Fusion 360 to Design, and create tool paths for the Shapeoko 3.

Thanks. The videos here show a technique similar to what I explain in the last paragraph–run side A, Flip on the pins, don’t re-zero. That one I get. What is puzzling me is the technique of setting up CAM to read side B off the bottom rather than top of the stock. 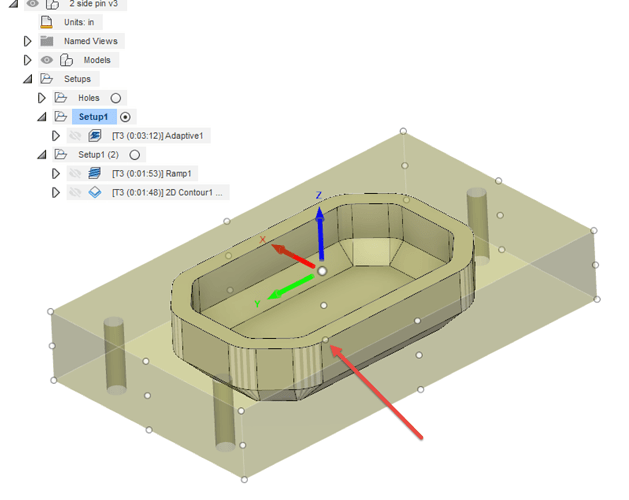 there’s all sorts of ways to address this.

going off the bottom on the second op gives you a very solid known point. going off the top once flipped can vary depending on if everything in the first op was successful and nothing is out of the norm. sticking to the bottom, well, as long as the bottom didn’t go anywhere (shouldnt?!!?) you’re golden.

I guess maybe I have stated my question in a confusing manner. The real crux of the matter is not where the WCS is set in the CAM setup. I understand that one can place it anywhere, as can be done in CC or any other CAM setup. What is puzzling me (go back and watch this video at about 12:50) is why would one switch the WCS to pick up from the top face of the workpiece on side A then flip the Z opposite and then pick up from what becomes the bottom when the piece is flipped. And, when this is done, how does one handle reprogramming Z zero (if at all)?