I think I have this all worked out in my head, but I thought it would be worthwhile to toss it out here just in case I’m overlooking something.

I want to raise the gantry about a 1/2 inch. Why? So I can fit a 26-inch diameter, 1/2 inch thick circle of plywood into the S3. For now, I can live with the 16x16 image area, and the piece described will fit just fine between the rails. But the bottom part of the Y slide is in the way by a fraction of an inch. I thought about taking it off and grinding some of it away, but I did not find that appealing. So I’m thinking I can drill new holes in the existing frame to be able to raise the Y axis the required amount. This does, however, push the belt tightener off the assembly. So I need to add a piece or bracket to afix the tightener to. I’ve ordered four 2 1/2 x 8 .19 aluminum bar pieces that I will bolt to the existing framing and give me a place to mount the belt tightener. I’m not sure these are necessary. On one hand, they would add some stiffening should raising the Y axis cause some additional flex. On the other hand, it might not be necessary. It might be fine to just bolt on a small tab to handle the belt tightener.

What are your thoughts. Do you think bolting an extension to the existing uprights is worth doing? Or would just adding a small bracket strictly for the belt tightener be enough? Can anyone see any real problem with raising the Y axis other than that will have some affect on the depth of cut on the Z?

Back in the Shapeoko 2 days, I flipped my machine around, mounting the wasteboard to the bottom of the machine and replacing it w/ a piece of particle board w/ some threaded inserts in it.

That said, it won’t do anything about the lip — if that’s still in the way, agree that you should be able to get some more height by steeling from the belt anchor area w/ new holes — the XL and XXL plates are taller by a similar degree, so that ought to be fine. Lots of ideas for belt anchors at: https://www.shapeoko.com/wiki/index.php/Belt_Anchors

That said, you need to be careful drilling the holes since they establish the squareness / parallelism of the machine.

I lifted my whole machine. You can see some pics here:

Raising the y axis is one way to go. The other is to lower the floor. Maybe worth consideration before modifying the mechanism of the Shapeoko?

My first thought had been to put the wasteboard on the bottom, but the front frame member is in the way.

@twforeman, sadly the link appears to be broken.

The first time I tried to go there, it was broken. I immediately tried it again and it’s working. EDIT: sorry, the link on the belt tighteners didn’t work the first time. I agree that the other link doesn’t work.

Link is malformed, & expanded to &, anyway, just edit out the extraneous “amp;” text in the URL and it’ll work. (EDIT: or use Tim’s fixed one below — mine wasn’t working 'cause I pasted in the link twice into the URL making field)

Yeah, you have to actually insert links with special chars as the “link” markup.

The last link works perfectly!
Thanks.

Tim Foreman, let me kinda hijack this thread to thank you for all your posts and blog. I took your design and ran with it. 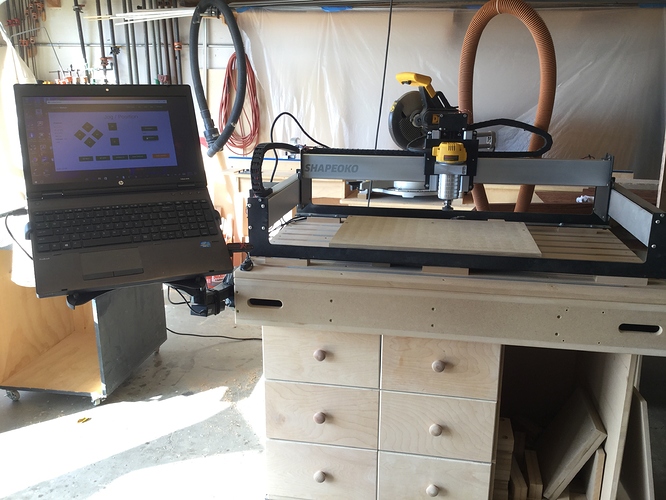 The only changes I made was to go with a 3/4 inch lift instead of 1 1/2, and I screwed the t-slot board to the torsion box instead of gluing. Just easier to change if I ever need to.

I actually ended up removing all the risers from my machine for the time being. The spindle didn’t quite reach low enough. But with the design it’s easy enough to put them back in if I need more height.

One option nobody has mentioned yet would be to turn the front and back angled steel brackets around so they point outward rather than inward, and then bolt it down to a base (as @Griff did, or to make some longer straps… then you wouldn’t have any impingement into the cutting area, you could have it raised up, and you wouldn’t be messing with the gantry & mechanics at all.

Here’s an update on raising the gantry. I removed the front and back assemblies and drilled new holes in them allowing me to raise the Y axis up 5/8 of an inch. This gives me about an inch of clearance between the wasteboard and the bottom of the carriage so I can easily slide a piece of “oversized” 1/2 inch stock into the machine. I had to add a small bracket for bolting the belt tensioner/holder, too.I ran some tests by making some holddown clamps, and if it weren’t for me it would be perfect.

List of things that make me weary of myself:

Pictures of your updated configuration?

There’s nothing to really show. I merely drilled four new holes higher on the brackets and moved the Y extrusion up 5/8 of an inch.

When vacuuming sawdust off laptop keyboard