I picked up a $8 drawing tablet from ali express a few weeks ago.

it turned up this week and I’m dead impressed:

well worth the money.

I bought mine from ali express but they can be picked up from amazon, ebay etc.

Looks like a grown up’s version of an etch-a-sketch. Hopefully the battery lasts at least a few weeks before needing replacing.

Cool gadget. Would be even cooler if you shook it to erase the drawing.

That would be awesome!

I don’t really know how it works but there is no on button. When you click the erase it wipes it all. Apparently batteries last got years

Hmmm, haven’t really been into AliExpress before. The search interface seems pretty lousy, as negative/exclusion terms don’t work. eg “lcd writing tablet -8.5 -8.5inch” specifically pulls up stuff with the word “8.5” in it. Aargh.

It turns out someone’s already solved that problem, making a front end that does make use of more advanced search terms:

With that, it’s possible to filter stuff pretty well. Here’s a 20 inch version of the tablet:

Now, if it could just save to sdcard or something, it’d potentially be useful for concept/design work.

This just cracks me up FWIW, this is known as a “Boogie Board” and is available on Amazon: 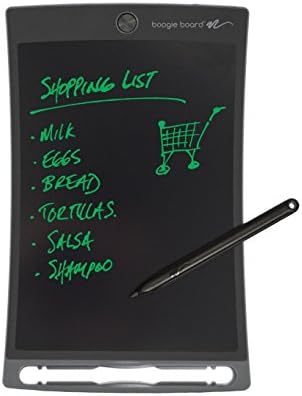 The new Boogie Board Jot 8.5 eWriter features an ultra-bright reflective LCD that is 50% brighter than previous models, combined with a sleek, ultra-thin and ultra-light product design that makes it i ...

I just use Nebo.app for note-taking/sketching — not quite as free-form as my Newton, but close.

Haha, not surprised you have a Newton Will. So do I.

Yeah, still waiting for Apple to make a replacement for the Newton — an iPad Mini or iPod Touch or iPhone which would support the Apple Pencil would work (if I didn’t mislike the way the tip on that clicks when you write or draw) — I suppose if I ever broke down and bought a cell phone I’d get a Samsung Galaxy Note, but I’ve tried very hard to simplify my life to the point that I don’t need gadgets like that.

The graphics tablets are neat — used to use a Wacom ArtZ on a ThinkPad 755c and a NeXT Cube — Wacom’s patents have expired on EMR, hence the rush of competing products.

I’ve been debating getting a Mac Mini and Wacom Cintiq, but would need to pair that w/ either an iPad Pro and Apple Pencil (but I could then use AstroPad to control the Mac Mini), or make do w/ an Android or Windows stylus, and that’s more complication than I want. Really, really annoyed that Microsoft has so crippled the stylus in Windows 10 since Fall Creators Update (can’t select text naturally, nor use the stylus in legacy applications such as Freehand).

I’ve been debating getting a Mac Mini and Wacom Cintiq,

Not sure if the recent Mac Mini’s would really suit that (they’re only dual core). I used to use an older Mac Mini (with a quad core i7 cpu) and a Cintiq 27QHD for some stuff. For CAD things though, the GPU in that thing was pathetic so had to build a real PC.

As a thought if you do go the Cintiq route, don’t go for the smaller models (eg 13HD). The whole screen (including toolbars and similar) has to fit on it, so everything is super cramped on the small ones.

I started out with the 13HD (bought online) and immediately upgraded as soon as I received it, realising it wouldn’t suit.

FWIW, this is known as a “Boogie Board” and is available on Amazon

Oh, they have a “Sync” model that can transfer the things drawn to other devices.