I’m playing with the Trial version of VCarve Pro and want to test one of their sample cuts on my Shapeoko XXL.

Looking at the toolpath for each cut, the default Home Position is 0.25 inches above the surface of the material…

…but when I use Carbide Create this setting is 0, i.e. just touching the material.

In Carbide Motion, should I move the cutter 0.25" above the material and then reset the co-ordinates to 0, please?

I did a basic overview on using Vectric software:

Vectric makes a line of popular software products. Here is one example of a workflow to create a G-Code file using these applications. Of especial interest is Design and Make, available from: http://www.designandmake.com/ — AIUI, this application / web site was originally a 3rd party, but was purchased by Vectric. The software “Design and Make Machinist” is freely available, and will allow one to use free and purchased clipart, adjusting and repositioning it as desired, then export it into a fo…

FWIW, I bought and used it for one project, but haven’t used it since beyond testing and tech support 'cause I find it fussy and the interface annoys me.

Have you worked through at least one of our tutorials at:

Have a look at this thread from the Vectric forums.

There is so much out there, I never know where to start! I’ve looked at so many forums and product websites I’m getting geographically lost

The only tutorial I did was the Hello World (apparently, it’s the law to do it after completing the build

) but I’ve not looked at the others.

I’ll look at your review, but I’m kind of trying to find a happy medium to do the things I wan to do in my head, and transferring them into practice - and I haven’t really sorted out my head, yet

and VCarve does seem to do that, and there are some things about CC I get a little confused about (it’s an age thing!). The biggest problem for me is VCarve is Windows software, as I prefer a Mac, but I do have an old Windows laptop it can run on.

I’ll try a couple of the tutorials and see how I get on.

I found VCarve confusing and annoying (I’m a Mac user as well), and Carbide Create has a simplicity about it which makes basic things easy, and even complex things can be done in it, esp. with the new version.

and if you’re not familiar with vector drawing software please see:

and try some basic project — perhaps:

A 3" wide by 7" deep by 1½" high rabbeted box with sliding lid intended to be cut out of two 3.5" wide, ¼" thick craft boards such as one can purchase at a home center.

Please note that we have a standing offer — if you get stuck, let us know at support@carbide3d.com (or here!) and we’ll do our best to work through it with you — many of the tutorials here such as:

The prototypical first job for a Shapeoko is to cut a coaster — here we do this using Carbide Create, trying to make the job as simple as possible, but adding a bit of interest with an inlay, and increasing the utility of the object by rounding off the corners. Before any real setup it will be best to go into Job Setup and Clear the drawing, and set the measurement units — please use mm (metric) for this tutorial. Note that the feeds and speeds in the Carbide 3D charts are given in Imperial inc…

came about from folks asking how to do things.

I will note that one excellent way to extend Carbide Create is to use a vector drawing program as a front-end — Serif’s Affinity Design is excellent and Mac OS X native (it was ported to Windows), or you could try Inkscape.

The biggest problem for me is VCarve is Windows software, as I prefer a Mac

Same here. I’m currently playing with the trial version of VCarve Desktop by running it in Parallels on my MacBook. Parallels has a 14 day free trial. So far, pretty good, except one time it made my (new) MacBook run hot and the fan ran like a banshee until I killed the program and relaunched it. I’m experimenting to make sure that’s not a regular thing before I plunk down the $.

I’ve tried Parallels when I first moved over to the Mac and couldn’t run any Windows software I thought was ‘essential’ - only there isn’t any! Most software, or good equivalents, can be found for the Mac.

I had the same overheating problem, too, which is why I binned it.

Fortunately, I have a work Windoze machine I can use for VCarve, if that’s the way I decide to go.

Well I have now been trialing Vcarve Pro for several days, also via Parallels. This is my 2nd attempt at trying to switch over from CC Pro and I have given it a real solid go. However, Vectric’s software is confusing and not that well maintained. There isn’t even a searchable help - it’s a bit “windows 95” frankly. The Box Creator gadget is a disaster and I have wasted hours on it. What drew me to it was additional control.

I’m sticking with Carbide Create but I hope the Carbide people are working on debugs.

Please let us know about any repeatable issues in current builds on up-to-date operating systems and we’ll do our best to have a developer look into them.

However, Vectric’s software is confusing and not that well maintained. There isn’t even a searchable help

Subjective at best, but you can’t possibly know these things in such a short time. For instance the “gadget” stuff isn’t supposed to work on Pro. The help files are online and are workable, but you have to learn any software by trial and error.

But, since you have made up your mind …

I am a novice user of Vetric V-Carve Desktop that tried the box building gadget and when I didn’t see that icon it was only a single Google search to find - as you pointed out - that it only works with Pro and NOT with the trial version.

I agree with the lack of a searchable help file but another Google search suggested switching to Single Page View and then print it as a pdf file. I had to save it in two parts (it gave me an err but saved the first 272 pages) I saved the second file from page 273 to 386 and then merged them into one pdf file which is now searchable.

You can view the help as a single page… as you said. Then just use ctrl-f to find (search) for anything in the whole document. and don’t forget the help file is context sensitive … so pressing the ? Icon in any dialog for a particular function will give help for that function.

Funny, I use Vectric Aspire (same interface as Vcarve with more features) and find it far simpler and more user friendly than Carbide Create, with more features that are useful to me. In fact I am so used to Aspire I really struggle to make a project the way I want in CC… Funny how you get used to a certain workflow

That being said I think Carbide Create/Pro is great software that is enough for a lot of people, it will be interesting to see what pricepoint they decide to run with when the (awesome) free trial of Pro is over.

Another valid option is Carveco, which used to be ArtCam. They are subscription based and have very similar tiers of powerful features to the Vectric software. A lot of people are very happy with that option too

I did quite like my experience with the trial version of VCarve Desktop, but I don’t like Windows so that’s a problem for me (I tried it on my work Surface Pro) - even the price isn’t unreasonable, but I’m not sure if it’s a one-off forever price, or only until the next main version is released.

I did raise my disappointment with them about Desktop not being available for the Mac, but it was intimated there may be a Mac release on the cards, but it’s a long time off. So here’s hoping!

They’d have to do a lot to the interface to bring it up to Mac standards.

Depends on the Mac standard you choose. It will take them a long time to lower it to the quality of, say, the XCode interface.

I’m actually rather fond of XCode, since it reminds me of InterfaceBuilder.app on NeXTstep (which was leaps and bounds over anything then available on other platforms).

Then you and I are very different people. It is leaps and bounds behind most developer IDE’s at the moment, in my opinion. Though I have to use one every day, so my needs might be different to yours.

Putting this back on topic…

I found VCarve Desktop to be very very similar to CC, but with more options and (for me) a better vector editor.

The UI is different, I admit, and there are a few more options that might appear daunting. I don’t find it cluttered personally.

Here’s some equivalent screens to communicate the differences. They practically do exactly the same things. Left is VCarve, right is CC. 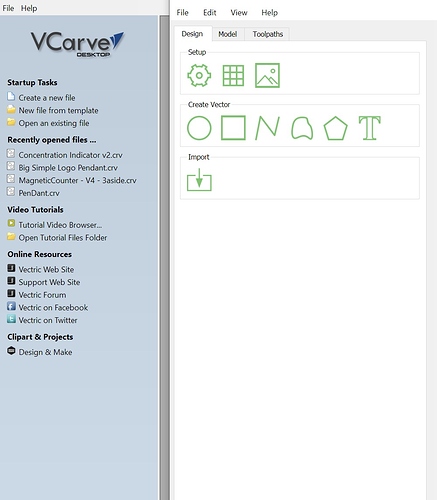 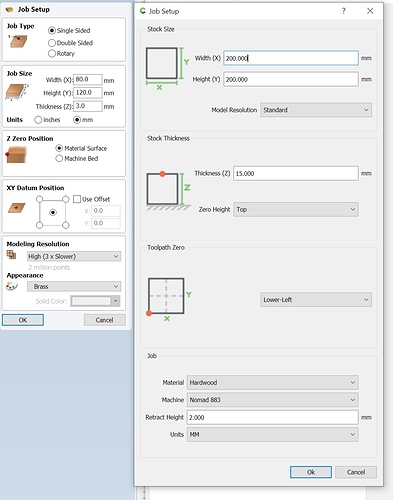 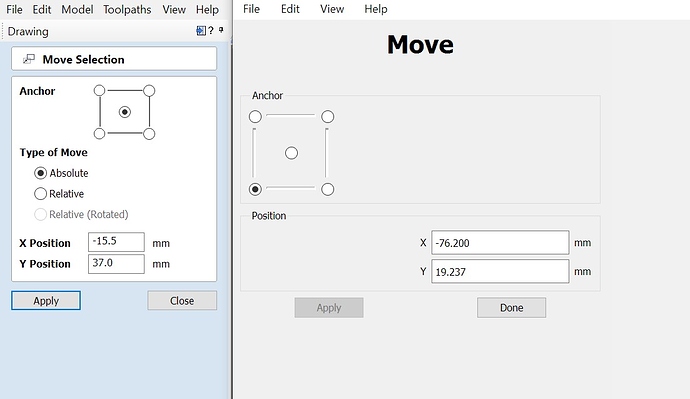 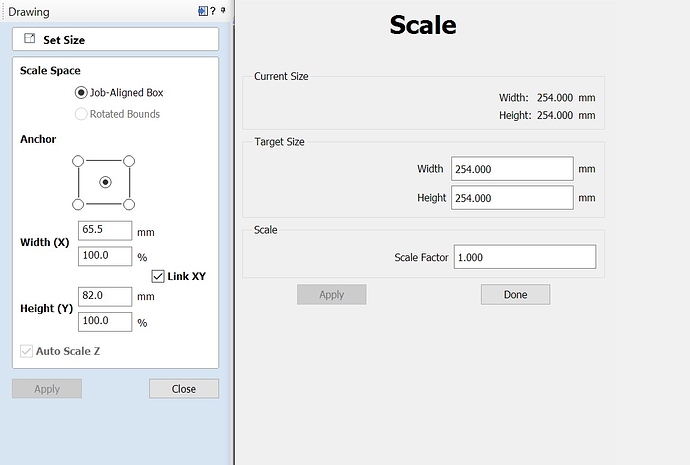 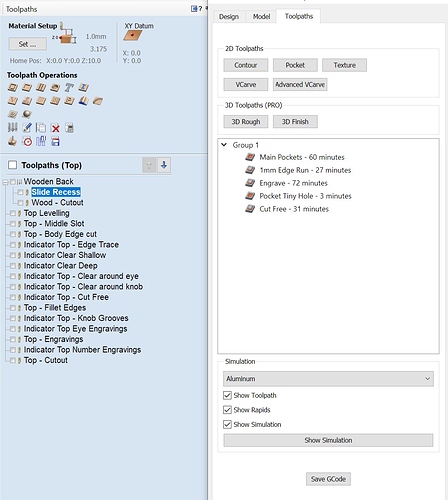 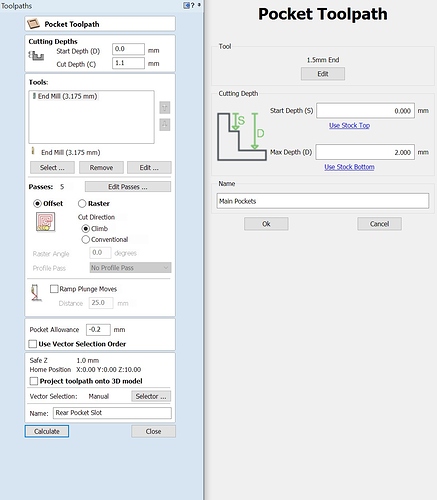 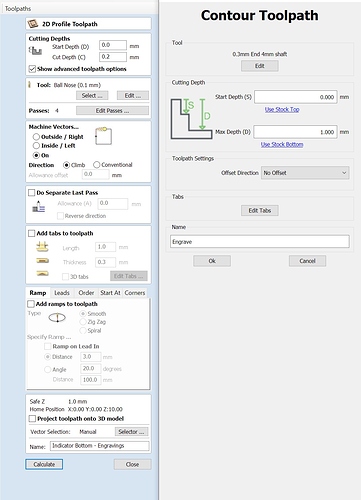 I find Vectric VCarve to have a cluttered interface, which I find tedious to have to work through each time I’ve had occasion to use it.