I need to make my own waste board with holes for alignment / some sort of clamping system for when I start cutting plywood.

Making a new waste board I need to know if there is a chance in getting marks / by wrong runs making marks in the waste board. I´m thinking of making a split waste board.

Each hole in the lower waste board will have threaded interests of some sort.

I guess this is an extremely elementary question by me; that never has runned a CNC machine:
Is it a necessity to install threaded inserts in my waste board?
Using dowels ( for example 9mm in diameter ) a good alternative for alignment / holding the workpiece in place?

PS: I will then not have any for for hold down equipment ; but is this neseccary when the most sturdy material I will work with is Oak / but mostly work with plywood with 3/4 thickness.

AFAICT no public drawings for the XL or XXL wasteboard designs. http://www.shapeoko.com/wiki/index.php/Shapeoko_3#Drawings

Either I was mistaken, or the drawings were since published. See: https://www.shapeoko.com/wiki/index.php/B.O.M.

Couple of different ideas at

I haven’t seen one posted yet, but they have happily posted some of the others (Nomad, for example)

I’d ask for the drawing and see what they say.

Considering T-tracks too , now, after reading your post; WillAdams.

My first post was a bit messy , I guess… I wrote too many questions, but I was wondering if anyone had any thoughts about ;

Clamps ( what I would call hold down equipment )
VS.
Dowels ( placed in holes in the waste board ) for just holding the workpiece in place.

Dowels work well for locating (frequently used for that in flip jigs), and one can use them along two edges of a piece, but they have to have something such as a cam clamp, or a sliding set of wedges to actually hold things in place.

Threaded holes in an aluminum table are one option offered by Carbide3D: https://shop.carbide3d.com/collections/tools/products/shapeoko-threaded-table — I did a grid of T-nuts in an HDPE cutting board which worked well.

I found these clamps ( see attached photo ) - they look like they would do the job with t-tracks.

The clamps are listed in the resource site you added in this thread.

Trying to figure out what a flip jig is - tried to google it, with no result. What kind of jig is it?
A lot of new glossary / terms to understand here…

Thanks for the replay, again 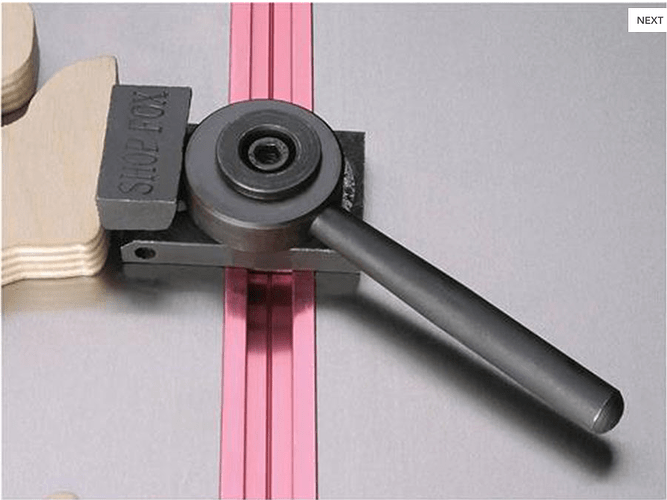 A flip jig (actually a fixture) is one which can be turned over, allowing one to cut both sides of a piece:

The Nomad Flip Jig allows you to cut both sides of a part while maintaining perfect alignment.  The Flip Jig is precision machined to mount to the Nomad 883 tab

You may find the glossary helpful: http://www.shapeoko.com/wiki/index.php/Glossary

I used my Shapeoko XXL and cut the waste board to accept the t-track. works like a charm, drill through holes and use machine screws and nuts to hold it in place.

Drew this up — please verify before use

Thanks you so much Will, strangely enough I got an email from Carbide with a drawing of the XXL wasteboard ; today !

It will be online tomorrow, On this site: http://carbide3d.com/docs/support/

I have now drawn up a sketch for a tapped hole wasteboard.
See attached screenshot.

Should I cut down the amount of tapped holes any further?

PS: this is probably a cheaper alternative for me ; I think I´ll do the tapped holes with inserts - instead of t-track. 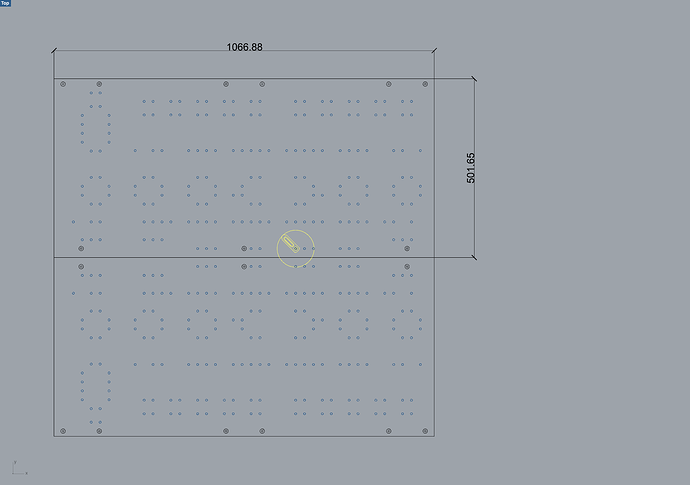 If that meets your needs, go for it!

When I did a T-nut bed, I was constrained by local availability, which ratcheted up the price: http://www.shapeoko.com/forum/viewtopic.php?f=35&t=6045

Chris, do you have any pictures of this idea your put forward? Could be a valued asset for others (like myself, who have yet to purchase their Shapeoko). I’m just in the beginning learning phase.

OK - so I´m trying to figure the “lesser” amount of tapholes needed in my wasteboard.

I have drawn up three alternatives - The clamps that are drawn up in the drawing be used for this setup.

I guess the alt.3 is the one to go for; last added screenshot from me in this thread with attached screenshot was too “messy” in the layout.

PS: I have used the outer diameter of the clamp as a measurement on how to “limit” the amount of tapholes. 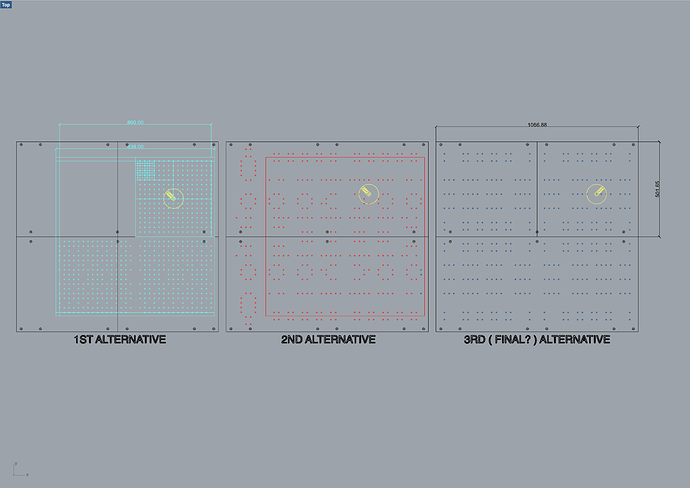 I guess this will be my last replay to the topic before making the new wasteboard.

I don´t have any extra limit sensors; so will need to cut the wasteboard in four pieces. I will use a lamello biscuit jointer system. 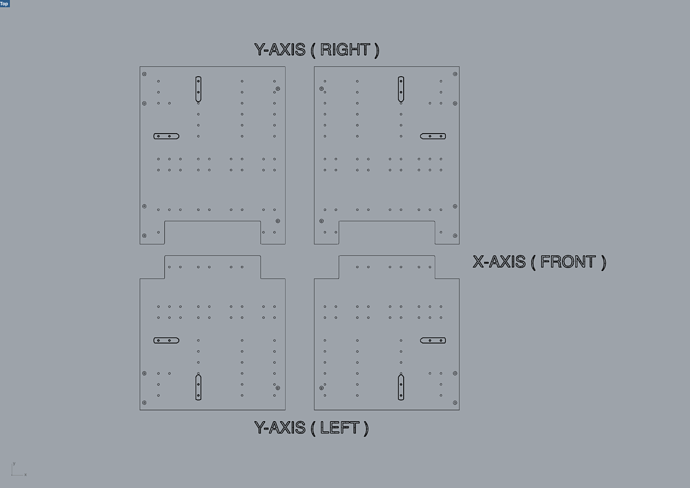 You can draw the holes in your CAD program as 7.7 mm and cut them as pockets

This was implied in my link.

Only if your spindle is rated for a speed safe for the bit.