I’ve recently discovered the rest machining function in Carbide Create Pro, and am really loving it, and it seems fairly straightforward. However, in order to minimize my bit changes, I’m wondering if after setting the order of tool paths, and specifying the previous diameter, if I can then mix and match their order to allow various vectors on separate paths to be cut out of sequence, so I can do all the 1/4 bit cuts first, then change to smaller bits, etc. For example, say I have two separate vectors, each going from 1/4,1/8 to 1/16 in a rest machine sequence. Can I then order them in Vector 1 (1/4 cut), Vector 2 (1/4 cut), Vector 1 (1/8th cut), Vector 2 (1/8th cut), and so on? Or do they need to proceed in the order originally created? Thanks in advance.

So long as the matching larger tool removal already happened, it is fine to re-order REST machining toolpaths as you describe.

Thanks for that. Actually I’m now curious to find out more about how the software calculates this function, is there much written about it? Does each subsequent toolpath in rest machining retroactively calculate what would have been taken away by the specified previous bit, so not to be dependent on the existence of a previous toolpath (other than the fact that the material has been already removed?).

There was a bit in the feature announcement.

For a given selected geometry, one applies a specified larger tool, and based on what that would leave uncut for that geometry, the REST machining is calculated.

The rest milling operation is not dependent on any previous toolpath. It just assumes you ran the larger tool first. 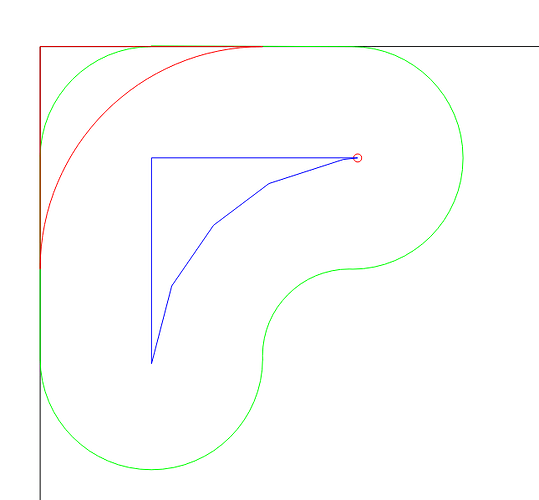 Essentially what happens is, based on the “Previous Tool” you define it calculates the remaining material (Red), Then generates a toolpath to remove only that material with the smaller tool.
The path (Blue) will actually remove a bit more than necessary (Green outline), but it saves a lot of time by ignoring the bits that were already cut to the vector.

One odd thing is that it starts on the little red circle, right up against the part. I would like to see it start in the middle of the redundant arc in the toolpath, or even better something like this 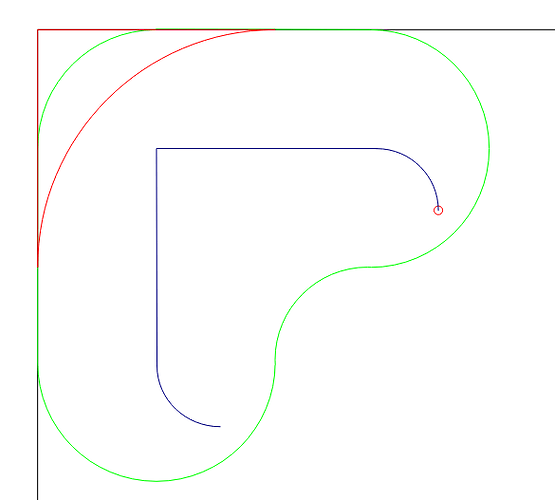