My new XXL arrived last week and I’ll be finding time to assemble and get set up in the near future. Before then, i’m trying to get a handle on what my best workflow is going to be. I’ll get familiar with Carbide create/motion just to get the machine up and running, but i know in the future i’ll want some more advanced CAM software.

I would like to use the machine for 3D carving, as well as 2.5D profile cuts, and from what i understand the carbide motion software only supports 2.5D.

I’m highly proficient with Rhino 5, and would like to be able to continue to use Rhino as my primary modelling software when i’m designing items to be milled on the xxl. I love the idea of RhinoCAM operating entirely within Rhino, but I don’t like the idea of spending $600 for the most pared down version of the program.

Have any other Rhino users figured out a good work flow for 3D? I’m willing to spend some money on CAM software, but i’d like to keep that expense under $200 if possible, and if there are any decent free options i’ll take a hard look at those first. I’m not sure what to make of the “Heeks” CAM software mentioned in the 3d workflow on the Shapeoko wiki.

I have also downloaded the ‘free’ non-commercial 1 year Fusion 360 license… but haven’t had time to delve into it yet. Is it worth it to go down that rabbit hole? I could be convinced to learn some new software if the Rhino workflow is overly onerous, or if compatible CAM software is overly expensive.

I’m currently set up and proficient with

I make a lot of architectural models. [www.rdmetzgar.com] I’m hopeful that the xxl will enable me to carve smooth topography for model bases, as well various other model bits and who knows what else.

This seems like a great community, and i’m looking forward to becoming an active member.

Replying to my own message here… I just saw the Rhino freeMILL option on MecSoft’s website (!)

Does anyone have positive things to say about it? I’ll be testing it out regardless as it seems to hit most of the items on my wish list.

there is a good free texture generator here : - Just turn saturation down to get greyscale textures, change the intensity to get more or less 3d effect and download the PNG file. https://webdesign-assistant.com/background-editor/background-generator.php A lot will work well with Carbide Create - some won’t…

Today I played a bit with taking STL files into Carbide Create (PRO). This is a work in progress, but the question comes up here often enough that I figured I should show screenshots of what this process looks like Step 1: Find a suitable STL file Not all STL files you can find on the internet are suitable for machining on your Shapeoko. 3D printers can print “true 3D” objects that contain hollow areas underneath solid areas. With the Shapeoko, you can only “cut from the top”, so the hollow a… 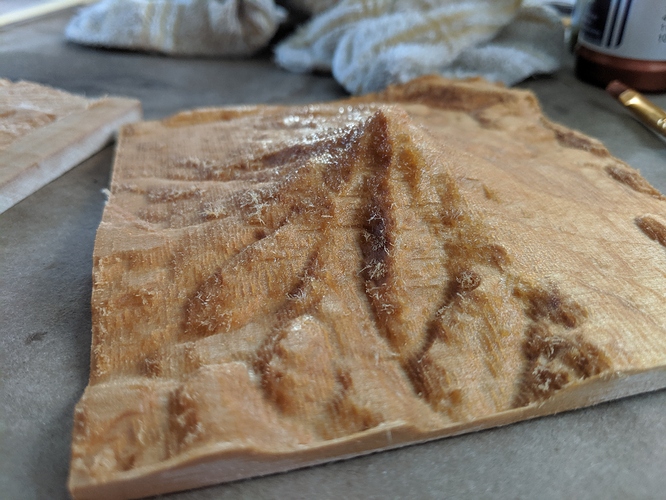 If you don’t do the CAM inside Rhino your main option is to export an STL and use a 3rd party tool such as MeshCAM, pyCAM, or Freemill (unless the latter works inside Rhino?).

If you search this thread you will see several threads including a methodology to produce detailed 3D Topo by @ClayJar. He is using F360.

Thanks for the thoughtful responses.

All of my terrain carving will be at scales like 1/8" = 1’ where GIS data isn’t specific enough. The smooth terrain models I’ll be making will be built in Rhino directly from surveyor’s CAD and architectural plans, altered to include things like paths, roads, driveways, building sites, retaining walls etc. In the past I have made these features out of layers of cardstock, laser cut when I had access to a laser, and cut by hand when I didn’t. Being able to carve smooth terrain will allow me to build more sophisticated models with less time investment.

It looks like FreeMILL operates inside Rhino and exports G-Code as an .nc file through a Shapeoko post processor.

In that workflow is my last step using a G-Code sender to operate the machine? Is there a preferred program?

carbide motion will send .nc files just fine as long as theyre under like 20Mb… it’s pretty much click-and-go

cncjs is sort of the tweakers choice, much more powerful