Rust building up behind linear rails on S04 XXL

Well add this to the list of unexpected things. I’m noticing rust forming on my linear rails between the rail and the aluminum extrusion. No way to really deal with it without disassembling the rails and cleaning behind them. Anyone else noticing this issue? I’ve only had mine for ~1.5 months, its been dry other than the humidity in the air which I can’t control in the south. I’m sure its worth reporting to Carbide3d so they are aware just wasn’t sure if others were seeing similar issues. Here is a bad picture 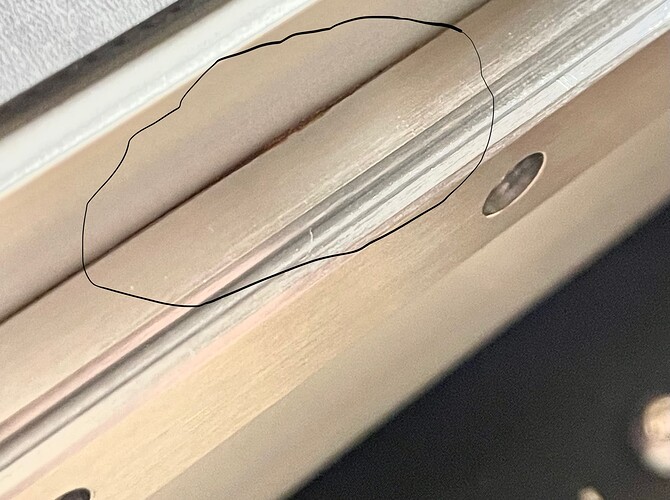 Something I’ll have to check on mine. Mine is in my basement, and I had a little surface rust appear in a couple of spots, though not where the linear guides run. I knocked it off with some scotch brite, follow up with some Mother’s aluminum polish, and then wiped down all of the rails with carnuba wax. For what you’re showing, I’ll hit it with some Kroil, or P’Blaster, and call it good.

Yeah well the problem is its rusting behind the rail where I can’t get to it to remove the existing corrosion without unbolting the rail. Moisture is building up behind the rail and causing the rust or it started before it left the factory and is continuing to grow.

I live in the south, as far south you are going to get in the States. I control humidity well enough, inside structures, with dehu’s. I wouldn’t worry about it. If you want to do something, apply your oil of choice, it’ll be drawn in by whatever atmospheric pressure differential might exist. It’ll reduce the supply of oxygen.

The bigger issue is that the rusting is occurring behind the mounting surface where I can’t oil the rail. It may not be an issue today but the only way to deal with it is to actual take it all apart , remove the rust , reoil the backside of the rail and then hope it doesn’t continue to be a problem. What is concerning is that moisture and oxygen were already behind the rail if 1.5 months into ownership I’m getting corrosion from the mounting side.

Just to ask what is probably a stupid question… are you sure that is rust, hard to tell from the photo but if you were cutting darker especially reddish wood like paduk that could just be dust from that job.

I cannot see the extent of your problem, to me it just looks like oil soaked wood dust. So maybe I am being disingenuous trying to reassure you.

If you apply oil to the interface, I suspect it will surely find its way behind the rail.

Already there, there now, always will be. The machine wasn’t produced in a vacuum, and I doubt any of them live in one(that said, if the surfaces are sufficiently interfaced, they might create some degree of pressure differential). I suppose such conditions might be potentially exacerbated by the aluminum steel interface and the inherit temperature differential during operations. But alas, its steel, it’s not being regularly oiled by the carriage. Shoot some oil on it and have fun with it.

I haven’t cut wood only aluminum and surfacing the spoil board. It’s not dust. I’ll try and get better photos tomorrow when I have more light. It’s definitely rusting.

It’s not dust. I total understand that the machine wasn’t produced in a vacuum but you have 2 different types of metals interfacing in an area that can’t be lubricated. I only cut aluminum but the issue is prevalent on one Y rail all along the rail. I’ve had an HDZ on my SO3 for 2 years and never had this issue. The issue is not that steel will rust but the fact that its rusting in a place that probably needed oil before it was mounted because its not designed to be moved and it appears moisture was trapped on the surface when the 2 were mated because when you see rust bubbling up that fast oxygen and moisture are trapped at the interface. Will it ultimately effect anything in the short term no…but its not going to get better on its own either. What I was trying to understand was if anyone else was seeing issues with rust bubbling up from behind their rails on the newer model. It could also be a sign that their is current moving through the rail speeding up oxidation between that y rail and the extrusion and I’ve had some issues with failed homing sensors.

This is the best for overall protection:
T-9
I use it in the shop as a coating over our magnetic chucks after we dry off the coolant.
Not cheap but it’s the best I have found.
Buy a gallon and it will last you forever.

Yep, the coatings work really well, I used this similar coating on the linear rails I added to my SO3

As Sean says though, the rust is behind the rails where the extent is hard to gauge and once rust starts it progresses much faster than a non-corroded surface so some sort of chemical rust arrester is possibly a good plan.

I’d suggest talking to support, as stated, you can’t get to the back of the rail without removing it and I presume that Carbide applies some sort of corrosion inhibitor to the non-lubricated surfaces of the rail prior to assembly.

Yeah that’s what I’m more or less trying to quantify is if they are doing any prep to the rails before mounting them. If they are then it’s possible I got a dud rail and it’s going to be a pain to try and mitigate future corrosion the right way. Keeping the face of the rail rust free is honestly pretty simple. My HDZ on my SO3 I’ve done absolutely nothing to other than keep clean and never had this issue that’s what threw me off seeing rust forming all along a single rail

The face of the rail gets re-oiled continuously by the linear bearing blocks rolling back and forth, they have an oil reservoir inside (which you have to top up) which keeps the bearings lubricated and this leaves a film on the rail.

As you say thought, the back of the rail is harder to reach and doesn’t get automatically oiled.

As a Pro owner this is… nightmare fuel.

It’s not good but it’s not so bad either.

The running edges of the rail where the balls roll are the key faces for accuracy and bearing life, those are kept lubricated by the oil you put in the bearing blocks to keep them lubed properly. I track this by occasionally wiping the rails clean, jogging the machine and then checking that there’s a slight film of oil left behind by the bearing blocks on some white tissue. When the blocks stop oiling the rails I re-oil the blocks, takes a few minutes with a small syringe, There’s some rail care instructions from Luke on the forum here.

We’re working on a maintenance guide but it is based off the above content. We’re also trying to bottle Vactra No 2 and release a maintenance kit. I can understand your frustration - unfortunately any machine that uses ball screws and linear rails needs oil applied. It’s one of the downsides of this type of motion and one of the benefits of V wheels. In the instance of your machine binding please contact support@carbide3d.com. Typically if a machine was binding it would do so out of the box.…

If your rails are still shiny and rust free then maybe just give them a periodic cleaning and then wipe down with a sponge applying a little of the Mobil Vactra way oil to make sure that any exposed areas not lubricated by the bearing block have a good oil film to protect them?

Ain’t scared. Ain’t worried.
I will give my rails a spritz with some P’Blaster, allowing it to seep in between the rail and the extrusion as preventative maintenance. Careful around the belts, as I’m sure any penetrating oil would not be good for them.

Yeah that’s what I’m more or less trying to quantify is if they are doing any prep to the rails before mounting them.

All our rails are shipped to us in what I can only describe as individual oil soaked bags - it’s a horrid job unwrapping them. From there they are wiped down and mounted to an extrusion. All the extrusions are machined and get a very healthy dose of coolant are part of the machining process - this is removed and dried over a number of days/weeks. All done in a nice dry warehouse.

I can’t advise if this is or isn’t rust, but if it was I’d not be overly concerned - the issue is on the rear of the rail. I’d put a little WD40/3 in one around the spot and cover with a rag over night to let it soak in. Wipe off then re-apply some mobil vactra no 2.

Also to chime in, I’ve sometimes observed Loctite wicking out between mating surfaces leaving a colored residue at the edges. I personally wouldn’t worry about it.

I’m going to keep an eye on it. I’ve never seen corrosion form on the backside of rails like this such that its spreading up. I wondering if there isn’t some current that is leaking across the rail somehow. All I can do is keep an eye on it.

I thought the same thing at first but I was taking a feeler gauge trying to scrape some off the rail and it was pitting. I honestly wish I could get better pictures but its running up the backside of the rail its hard to get a pic with an iphone.