I am attempting to learn how to perform 2-sided machining on my Shapeoko by using a “flip-jig” technique. I am new to both using the Shapeoko and using Fusion 360.

I attempted to machine the part by using a 3D adaptive toolpath for roughing followed by a 3D Parallel toolpath for finishing. This technique worked very well for the top side, but when I flipped the part over there were a series of cuts and plunges that made a terrible noise. Even the initial plunge sounded terrible.

I noticed that after running a simulation in Fusion 360 there were numerous “shaft collides with stock” warnings. I suspect that many of these warnings are caused by an imaginary “machining boundary” that I defined in order to prevent the machining from cutting the fasteners holding down that part.

It may also be that the toolpaths that I chose make too aggressive cuts?
I find that a little confusing since the top half machined ok using the same toolpaths.

Before the second side machining operations finished I had to stop the program. The bit had lowered by 1/2" and was cutting a hole in the threaded wasteboard. I believe the bit was loosened after some the the collision/aggressive cuts.

Attached is the fusion file.

If anyone can offer advice, I would greatly appreciate it.Flip Jig Test v30.zip (1.6 MB) 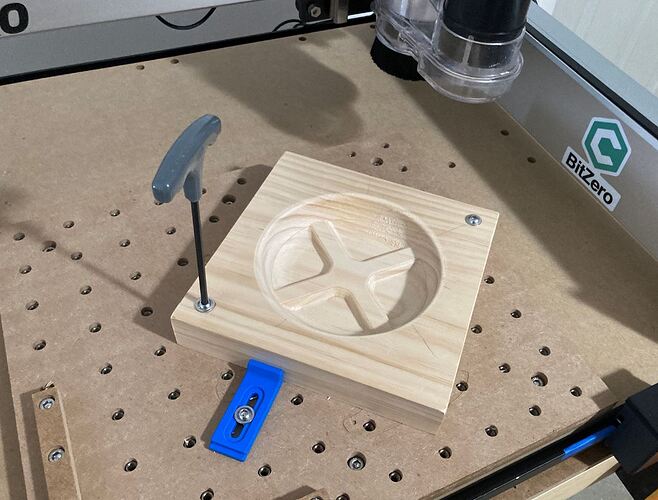 This is a picture of after the top half was machined.
These operations completed succesfully. 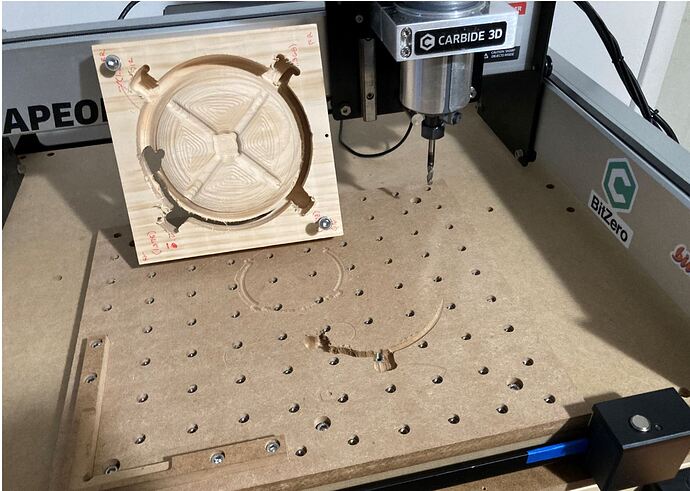 This picture shows the work piece after the second set of machining operations.
You can see where the bit is 1/2" or so lower than where I set it. I think this happened as a result of overly aggressive cuts in my fusion program.

Unfortunately, after the bit lowered in the collet, it machined a nice new path in my threaded wasteboard.

it looks to me as if the shank rubbed the stock (a lot), which may explain the strange sounds and ultimately the failed cut. Taking a look at the file right now. What’s the length of cut on that endmill? 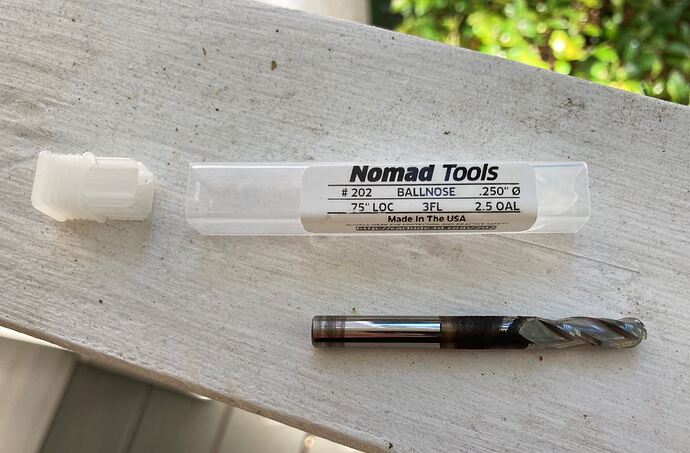 Could be pulling the bit from the collet if not tightened well enough. Causing the rapid increase to depth of cut we see in the picture and waste board. Those 4 pocket features may caused sudden increases to tool engagement which may have helped get things moving.

Looks like you may have cut through an insert or two as well in the spoilboard once things started going south.

Ouch. that’s definitely burning from rubbing the shank on the material, which may have led to the tool then being pulled out (from the vibrations)

Fusion360 decided to update when I wanted to open your file, so it took me forever to open it. I see the stock is 1.4" thick, and the #202 has a length of cut of 0.75", that second/flip job goes deeper than that, which is also why Fusion gives you many warnings: 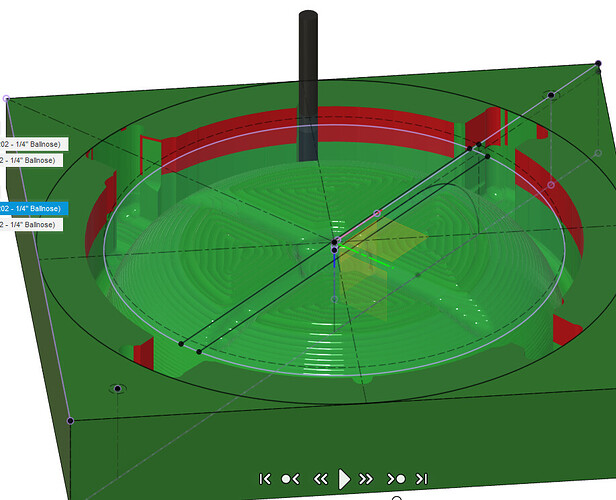 So I’m not sure it explains everything, but it definitely explains some (most?) of the problems.
Sometimes it’s ok to use an endmill with a length of cut that’s lower than the cut depth, but most of the time you are better off using an endmill with longer length of cut, and/or plan to have a clearing path that will remove the walls against which the tool would otherwise rub

Attached is a video clip of the job running.

The clip is only a few seconds long. It shows the job running normally and then it shows that noise I was referring to. Do you think that this noise reinforces your statement about the length of the flutes? I would guess that it does.

If that is the case, then the first thing I need to do is buy some long reach ball end mills to cut 1.5" thick stock?

How did you generate the image you posted that shows the stock as red?

Do you think that the toolpaths are too aggressive? Could that have also been a problem? I have little point of reference, but it seems like the 3D adaptive toolpath has a depth of cut of 3/8" or so. Is there a better method to remove material or were my settings off?

BTW, I would be willing to bet the collet that was being is now ruined as well…
I would suggest not using it if you can hold off until you can get a new precision collet.

Thanks for the reply. 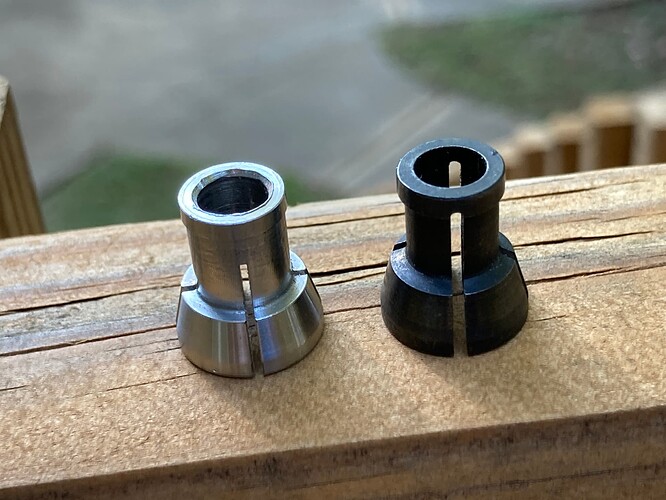 The silver collet (I assume this is the precision collet) prevents the end mill from being pushed past the top of the collet. I understand that this is by design. However when I tried to use this collet while machining thicker stock I soon realized that it I couldn’t get the top of the cutter above the stock and maintain adequate clearance heights, so I used the black collet instead.

I’m new to using both the Shapeoko and Fusion 360, so I am unaware of the exact limitations of the machine and the software, but I would really like to be able to machine stock that is close to 1.5" thick.

I can’t tell by looking at the collets if they are ruined or not. They look ok to me.

The precision collet should allow the shaft all the way through — please let us know about this at support@carbide3d.com and we’ll swap this out.

The one on the left is ruined, though I have to say, it looks like more than a slipping bit shaft has happened to that one… what caused that crowning and rolled ridge at the top of it?

I think the slotting was too aggressive. You are 0.394" deep with a ball mill. Yeah, the chip load doesn’t compute to be that high, but that still generates a lot of heat and loading on the bit. In my experience the that combo can loosen up the bit from the collet (perhaps aided by a less than optimal collet torquing). I had that happen on a full-sized router installed into a router table. I was slotting poplar using the #201 endmill at 0.5" deep. There was no way the collet torquing was half-assed by me, but may have been less than necessary nonetheless. The bit ended up extending from the collet until it poked through the 0.75" poplar about 3’ into the cut. The bit was still cutting, but the fact that it was super hot obviously indicated things were not dandy.

I’m not a cowboy like some of you guys. I’ve been stepping down 0.02" to 0.08" per pass on my CNC for things like contouring and roughing. I’ve got the time to wait for the machine to do its thing.

The clip is only a few seconds long. It shows the job running normally and then it shows that noise I was referring to. Do you think that this noise reinforces your statement about the length of the flutes ? I would guess that it does.

That noise is chatter, which can appear in a variety of situations but mostly it means the endmill is vibrating around its normal axis position. This is bad as you then get sudden variations in tool engagement in the material (which can further feed the chatter). As other have noted, here it’s probably due to a combination of (too) aggressive depth of cut and the shank rubbing on the wood, maybe combined with a semi-loose collet.

Indeed a ballnose should preferably not be used for roughing, it’s best used for finishing curves when there is little material left to remove.

Finally, chatter develops more easily when you use a large stickout (i.e. the length of the endmill that is outside the collet), the longer the stickout the more the endmill can deflect, and when the tool deflects it wants to come back to its rest position, then it will deflect again, and you get a periodic “bouncing” of the endmill to/away from the material…chatter.

If that is the case, then the first thing I need to do is buy some long reach ball end mills to cut 1.5" thick stock?

Yes. Even though you may get away with using endmills with shorter length of cut, the straightforward solution is really to buy endmills with a length of cut that cover your deepest toolpath Z range.
If you can’t find them, then you need to design the CAM such that you will minimize or avoid the rubbing but that’s not always possible. In your specific case here, you could have chosen to do the bottom side roughing by starting from the outside of the stock, and having the toolpath remove all material from the outside in, layer by layer. This way the tool shank would never rub. However, you would loose the two location pins too, so you would need to adapt your workholding strategy. As I said, it’s just much easier to get a tool with longer LOC

How did you generate the image you posted that shows the stock as red?

That’s just the Simulation feature in Fusion360 (select one of several toolpaths, then click on:

Do you think that the toolpaths are too aggressive? Could that have also been a problem? I have little point of reference, but it seems like the 3D adaptive toolpath has a depth of cut of 3/8" or so. Is there a better method to remove material or were my settings off? 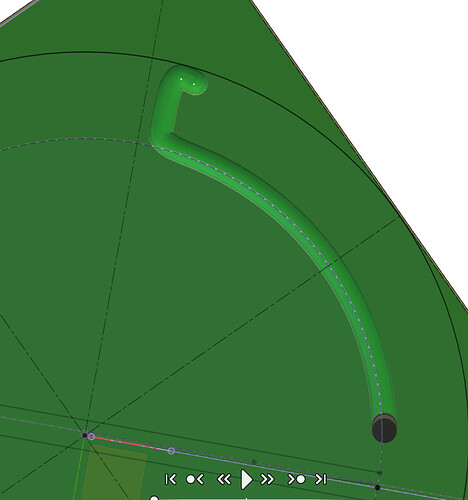 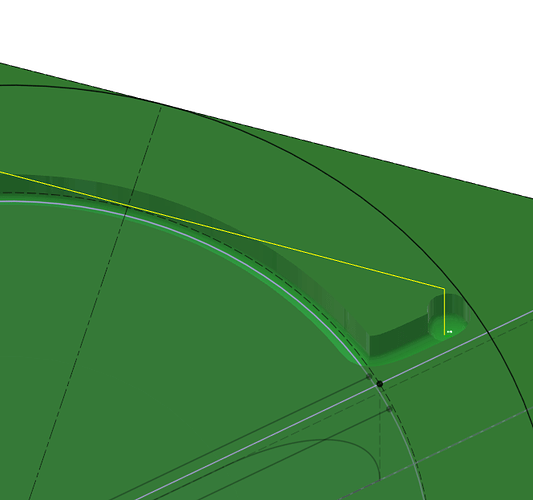 If you edit your toolpath to declare “stock contours” and use the square outline of your stock: 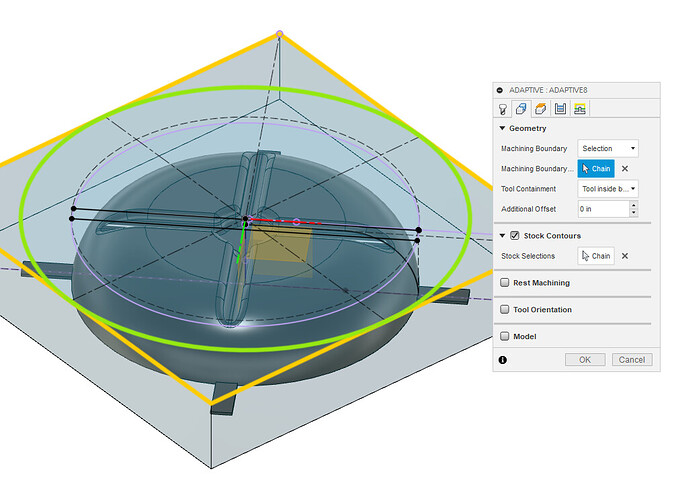 using the same cutting parameters you get this: 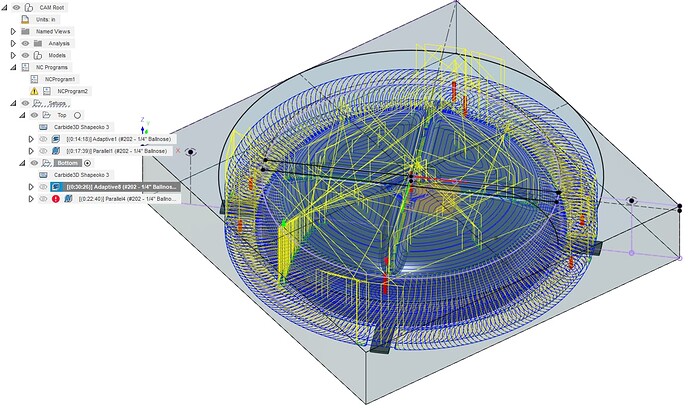 which at first looks somewhat similar, except this time it will enforce the helix entry, and the optimal load you set, taking large circular bytes: 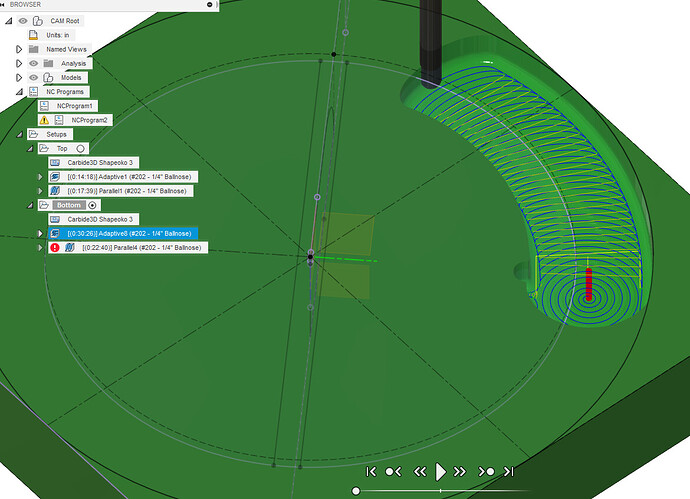 Of course now the cutting time has increased (30min versus 12min initially), but I think it would make for a more uneventful cut. It’s still using your ballnose endmill in that simulation, but again a square endmill will mean less trouble for roughing