I have a shapeoko 3 XXL and I have a problem when the cutter gets close to the aluminum profiles. It seems that the limit sensor does not tell it to stop and there is a shock.
I don’t understand because I think I have correctly set up carbid motion.

Below is a video to see the problem, and here it is minor it can be stronger : 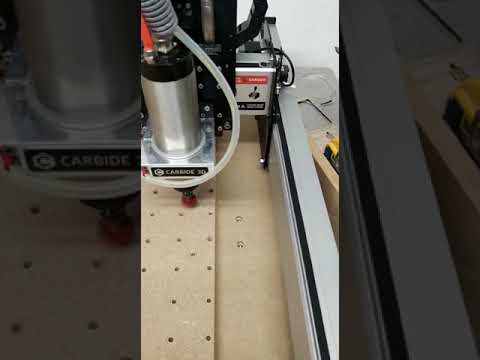 The problem also appears sometimes when the cutter goes up to the top right, it is in stop and everything starts to shake.

Has anyone ever had this problem? If so, how did you fix it?

I don’t know what to do

Thanks for your answers

The switches are actually only used during the machine initialization, they are ignored while running a job (because they are on one side of the machine only so you could still crash the gantry on the other side, and because of the risk of false-positive detections due to electrical noise that could ruin an ongoing job for no good reason)

While jogging, Carbide Motion enforces some travel limits for you, however during a job there is no protection so you need to plan to stay away from limits at the design level. In the case of your example video, it seems that you made the wasteboard large enough that when you run that surfacing pass that overshoots the borders of the wasteboard by ~one cutter diameter, it exceeds the X travel limit by a small amount. For this specific example you could just contain the toolpath within a slightly smaller boundary. For other jobs where this can happen, you’ll need to watch the match dimensions of your work

As Julien noted, the switches on a factory Shapeoko are homing switches. They do not function as limit switches.

You can setup soft limits. Provided you have homed the machine, and haven’t lost steps at some point, your motion will be restricted to the working area you define with $130,$131,$132

Well, colour me stupid. I had no idea about this.

I’m not sure how difficult it would be, but couldn’t limiting the travel of the router be set as a factory default, then leave it to the whizzos to adjust it, rather than leave it for novices to find out about?

Interestingly, whether limits should be enforced during a job (i.e. enabling GRBL’s soft limits, which are NOT activated currently by default) is a topic that has been debated a LOT. It’s one of those cases where there is no right answer. One person will prefer to have their job interrupted rather than crashing the machine, the next person will be furious if CM ever interrupts (i.e. potentially ruins) a job due to a soft limit when “there was still mechanical margin”, and when the existence of the soft limit was not made obvious.

Now setting the correct values for the soft limits that CM enforces during jogging, that is done as part of the machine configuration procedure, which admittedly is quite simple (and I guess that it would not be practical to do it in the factory, since all machines share a common controller and the Shapeoko comes as a kit with the controller taken from the generic pile as the machine is packed)

If I recall correctly, when I enabled soft limits, it would prompt a cautionary window to pop up as I was approaching the limit and it would inhibit full travel… I ended up turning them off; they’re theoretically a useful feature.

With GRBL, you’ll get some kind of Travel Exceeded/Soft limit error. Violating soft limits results in an Alarm condition. This stops the machine. You can soft reset, which clears everything, and start fresh. Or you can unlock, and proceed(Knowing that you’ve violated your specified limits). This is my recollection anyway, I use a variety of systems.

It’s also possible for the sender (ie: Carbide Motion) to handle this regardless of GRBL.

It could warn the user at the very point you hit START.

I’d be curious as to why(provided its not related to sales and service). Regarding a Shapeoko, I don’t see how one could make much of a compelling argument for or against the general use of soft limits. I think its a useful feature, but certainly optional, and not particularly well serviced with CM’s GUI.

Not being a GRBL person nor understanding the inner workings of CM my best explanation is that soft limits and CM do not play nicely together.

Consequently the folks at C3D have directed a number of times over the past 5 years not to use them.

Of course, not being one to kowtow to authority, I did my own tests. After my 4th random limit error in an area of the work envelope not governed by soft limits I figured the guy that wrote the code knows what he’s doing.

Sorry for the response time.

Thank you all for your elements, I understand better.

I will be careful during my next machining!