I am trying to make a sign for the wife. When I run the Carbide Motion, there are parts of letters missing. For example, the letter capital letter M has the 2 vertical lines, but is missing the 2 diagonals that create the M. Or in the letter E I ma missing the 3 horizontal lines that make up a capitol E.This is only happening on 4 out of more than 30 letters.

All lettering is the same font, same cut depth, all one tool path

Some more information or a picture of what you’re working on would be helpful, but to me it sounds like the features that aren’t being cut are too small for the size endmill you’re using.

Double check with the “Show Simulation” button at the bottom of the Toolpaths page, to see if any features are going to be left out because the endmill isn’t small enough to cut the feature properly.

You do not mention how you created the letters and toolpaths? Carbon Create, Inkscape or something else? If they have not been created properly, Carbon Motion will not cut them right either.

I created the design in Carbide Create. The lettering is about 1" high and I am using a 1\8" end mill. I have placed a ruler strictly as a scale reference. It is not there while cutting. 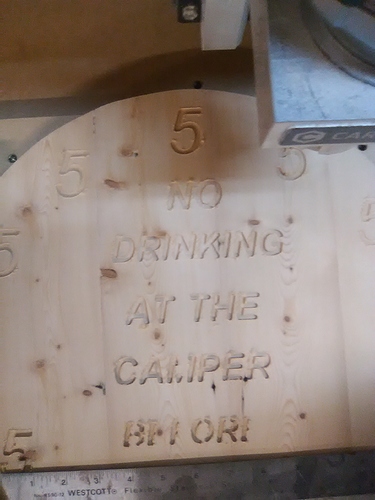 What does the preview show?
Just looks like your text is too small for the 1/8" end mill

How can a letter that’s an inch high and almost half an inch wide be too small for a 1\8 mill? As you cam see in the photo, the lettering above is cut properly. All the lettering is done to the same scale.

What does the preview show?

It’s the width of the font that matters, not the overall size of the letter?

The narrowest part of the letter must be at least 10% wider than the endmill in order for it to be cut.

It’s easier to use V carving for letterforms and other details imagery since a V endmill doesn’t have that limitation:

Were the bad parts of those letters the last parts to be cut?