Hello.When you guys have a milling job that may take 3 - 4 hours to complete do you run your shop vac continuously? Thanks George

They’re mostly not rated for continuous use, unlike full HVLP dust extraction systems so expect to see limited motor lifetime when run for many hours continuously.

You may also choose to have some sort of system to alert you to smoke as an electrical fail becomes quite a lot more likely when an intermittent duty appliance is run like this.

I have the same rigid shop vac for 13 years and often let it run for 8-20 hours.

Liam,
What model Rigid do you have?

I picked up an Oneida Dust Cobra for my setup (and I also use it for smaller tools with <4" diameter hoses) and it’s AMAZING. It is a steroid-based dust collector and is designed to run for extended periods of time. It’s HEPA and cyclonic. 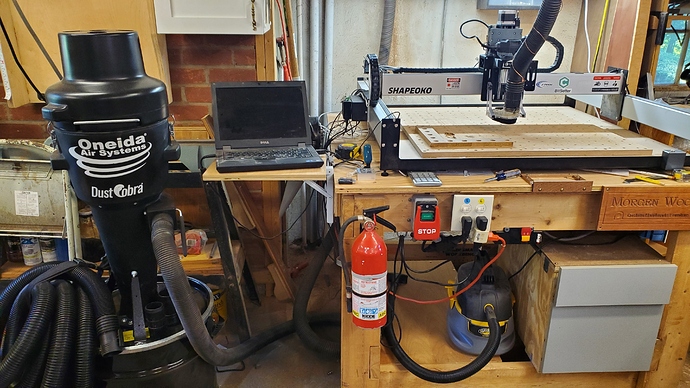 FYI: The little Stinger Vac on the shelf below, is fitted with a carbon filter and is only used to suck smoke when I’m using the laser.

Yes, but the second time I did that, ordered a Festool CT Midi and Oneida Ultimate Dust Deputy in the migraine-fueled headache rage induced by the noise.

If the machine is in a cabinet and you can not afford a commercial vacuum , is it OK to manually vacuum the milling as the job progresses with out any harm to the Shapeoko and the wood cuttings?

We’ve had a couple of control boards be killed by a static discharge during vacuuming by hand.

Also, it’s not a good thing from a safety standpoint — you should never reach into the machine’s working envelope while it’s running.

I run mine continuously. Ridgid shop vac with a cyclone, HEPA bag and filter; and I recently moved to a Dust Stopper so it would fit under my bench.

Ok, I want to do bas relief sculpting of animals ,fish ,etc mainly using 3/4" MDF 10" - 12" diameter. If I did not have a vacumm system to run continuously and and only used the vacuum when the machine is off what would the cons be other than being dusty inside the cabinet. I have a home hobby shop and I do not want to burn the house down with all these motors constantly running anyway.
Thank you fellows for your input.

I have an old no-name that was the house brand at B&Q years ago. It’s got a cheap Amazon cyclone settler in front of it which does an amazing job of catching most of the dust and chips before they get to the vac. What I like most about it is the exhaust port which I send outside through some 4" bathroom extractor fan kit hose.

Like others, I abuse it by running it continuously for hours when attached to my Shapeoko, but I won’t be surprised when it breaks and I need a new one.

I’d find a suitable dust boot and grab a cyclone from Amazon to use with a cheap shop vac until you kill the shop vac or can justify something more “industrial”.

Just be aware that you’re running it longer than it’s intended for, make sure you’ve got adequate air flow for cooling and keep an eye on it.

I’ve got a load of 3D printed fittings for gate valves and attaching anti-static hoses with which I need to write up and share here too.

Usually if you run a shop vac longer than it wants to be run it shuts down due to overheating — once it has cooled off a bit, it will then start up again.

It is a steroid-based dust collector

What in the heck is that?

I won’t be surprised when it breaks and I need a new one.

That’s what I’ve been telling my darling bride about my old Craftsman wet/dry for the last ten years!

That dang thing shows almost 100 dB on my meter!

That’s what I’ve been telling my darling bride about my old Craftsman wet/dry for the last ten years!

That dang thing shows almost 100 dB on my meter!

I put mine in a box lined with this stuff and took 9dB off the noise level; 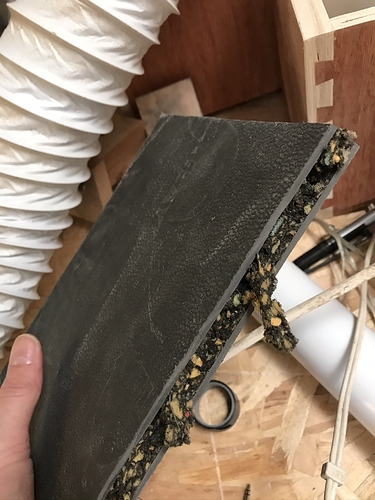 It’s a sandwich of heavy rubberised mat with a high density foam inbetween which is designed to both decouple noise transmission and to absorb noise when laid under flooring. 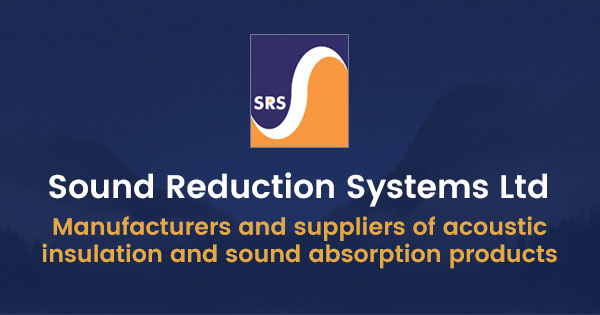 Acoustilay is the perfect product for sound insulating floors in domestic situations and can be used above most lath and plaster.

There’s lots of similar products, I just happened to have some offcuts of this stuff.

What in the heck is that?

I have a Jet DC1100 with an Onieda Super Dust Deputy 4 inch in/out in front of DC. I get no sawdust in Jet bag or canister filter.

Liam, in order for that to decouple, I believe one of the sides of that material needs to be firmly attached to the enclosure and not free floating. Otherwise it’s just acting as a (less than optimal) sound absorber. But because we are dealing with higher octave sounds, I’m not sure you need to decouple anything. I’d be curious how a couple inches of rockwool insulation in your box would work. A 9db drop is great, but I wonder how much more it could drop (realistically). Do you have a link for that rubber stuff? Looks interesting.

Never mind on the link, just saw it lol.

You’re right, properly attached it would perform better, the intended use is for it to be laid on top of a floor and then a floating floor laid on top of the matting. That allows it to decouple the real floor from the floating floor as there are no mechanical fixings to transmit vibration.

At the moment it is mostly just absorbing energy inside the box, which it’s primarily doing in the mid and high frequency. I found the stuff after building the box so the vac isn’t on a floating floor on the matting. The top and bottom aren’t covered, only the four sides as I had odd shaped offcuts.

What I should try is some adhesive to stick the mat to the inside of the box.

Given the way less than optimal “screw it to the inside of the box” approach it does surprisingly well at eating the mid and high frequncy noise I don’t want to hear. I can even not wear the ear defenders now