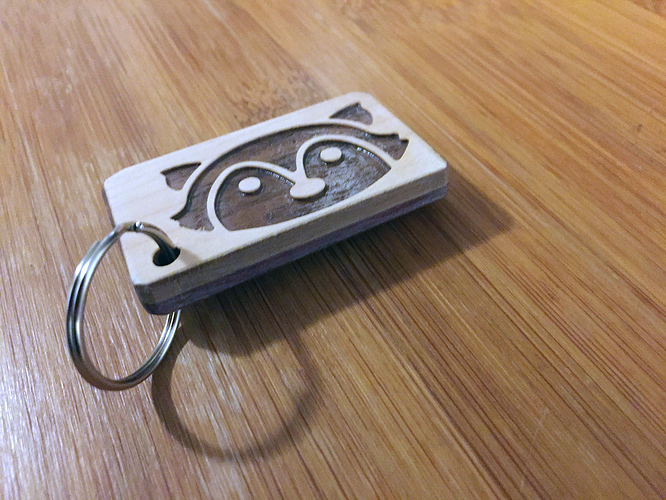 Layered walnut and purpleheart between thin layers of maple veneer then cut through with a 1/16th bit, happy with the result. The default feed&speed for the 1/16th bit was good though next time I’ll likely increase the depth per pass from the .006 it selected to .01 perhaps. The bit was barely engaged on the wood, which made for a very safe and quiet operation (almost no cutting noise at all just the router) so I think I can go a bit deeper and not worry too much.

fiero1, thanks! I have a few more blanks I can carve out, may try a few incremental steps towards your numbers. Default I got from CC was .006in depth per pass, 8in/min feed rate, 1.000in plungerate and it took quite a long time.

The defaults are necessarily quite conservative.

Fiero and Will thanks for the clues on numbers, will definititely be keeping notes and figuring out the best speeds for my setup.

Just a cautionary note — be certain, if you’re including any keys in photos to either black out the edges, or that they are suitably anonymous things which you wouldn’t be concerned about people making dupes of.