I;ve been trying to open a clean svg file from sketchup into CC. Everytime there is a break. After hours of back to Sktchup I have concluded that the closing of a face in sketchup is the problem. Also breaks occur if a line intersecting a circle is erased leaving a tiny break in the circle that is accepted by sketchup as close enough, same with lines over lines. Also snapping to endpoints is relative to the unit’s precision setting for snapiing to endpoints. Selecting an endpoint on the screen in sketchup will accept it snapped to but there is always a break after svg’ing and opening in CC. I used to use these units settings 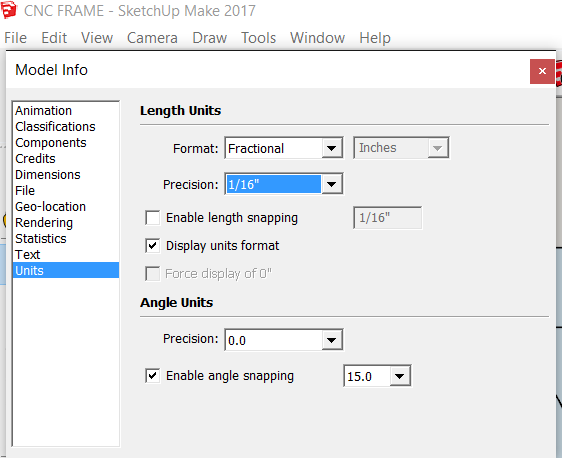 and now I use these 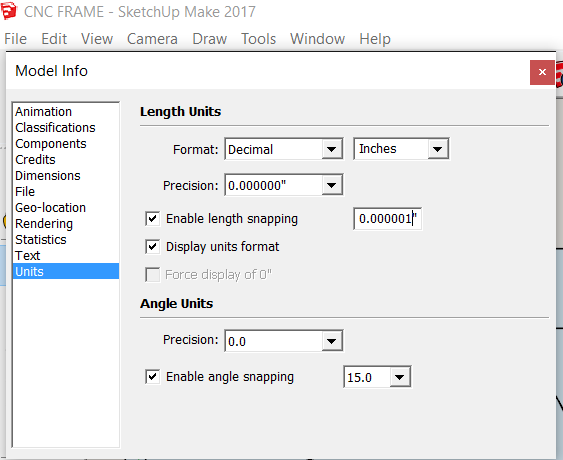 notice the decimals go all the way to 6 deep. Even with this setting the last line joined to the 1st endpoint to close a face leaves a break. I went to the extreme to outline a part with arcs to use the center points as a dot to dot outline to redraw my part. Just to prove to me that my theory was plausable. It looked like this with the blue part being moved out of the way when I traced the dot to dot with lines and arcs. 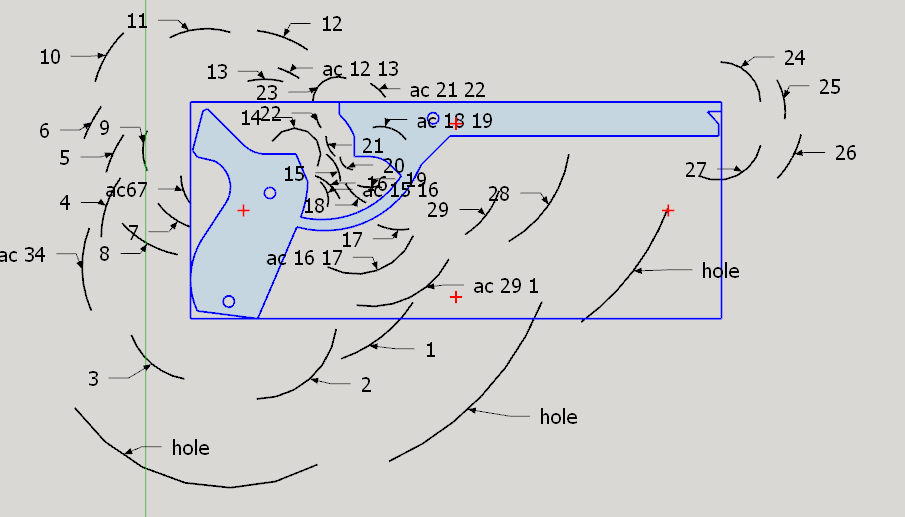 tracing w cntr dot of arcs.PNG905×517 15.9 KB
When I was done the last line I draw in sketchup left a break when I opened the svg in CC. If you try to fix the break back in sketchup than the new svg file has a break at the next line segment. Will, I am not asking you to look into this. I am trying to explain for sketchup users why breaks occur in CC. I also don’t think it is an error in CC. A 3rd party program to fix the breaks is looking like a real necessity to me, now. Also just trying to help.
1 Like
grumpa (Jude Marleau) January 2, 2017, 8:18pm #2

I just remembered that Will always requests the file in question. FYI here it is.

Iwas able to fix one in CC after it broke with a line at the end by drawing a rectangle and joining it to the part. I did get a clean file , here that is myautoframe.egc (451.5 KB)
your help is always very good Wil and Apollo. It took several attempts with a new svg file because the endpoints were not set to full sketchup precision as shown in first post. That’s why I went to the extreme of creating a dot to dot outline in sketchup so I could result a drawing in a completely consequetive sequence with no erasing. I appear to use erase alot, unfortunately. After I set the precision than the last point was the break, it left out the 1st line segment I drew, but I conclude it is because of sketchup’s unknown process for closing shapes into faces. Life is happy, computers are not all the time. Thanks everyone, I hope this helps, someone somehow.

See , I meant to upload the svg file and missed somehow, here is another try. this is the svg that I drew dot to dot.

As a side note, my reading topics caused me to write a rpoly in Shapeoko category to “any SO3 users running Estlcam” which may be my answer (with questions). If you have advise for me (greatly appreciated) please see this reply first so you don’t have to wonder where my brain is at. Thanks

I dabble in Make often… I’m working on a house design and I find the power of Sketchup amazing in this capacity. On the other hand I cannot speak to it’s use as a CAD platform. You might be better served to get your arms around another CAD or drawing package that can yield the end results you are looking for (yes, yet more software to master), YMMV

Thanks Jim, have so many years invested in sketchup, ouch. I use it for my woodworking, It’s been great for limited engineering very simplistic but frustration is abeited by “free”. I used AutoCad for 20 years professionally but can’t afford it now. The only problems I’m finding for CNC (so far) is the broken paths. I hoped Estlcad would be a go between until CC has that correction ability. But I don’t see where it imports and exports svg files. Accuracy in sketchup is to the 6th decimal point, Autocad goes to 16 decimal points. Those extra 10 points are real expensive. I’ll search for svg path correction programs and see what I find. Thanks Jim , ps WMMV ???

If you’re really attached to the idea of AutoCAD, you may find the free Draftsight of use: http://www.3ds.com/products-services/draftsight/download-draftsight

Listed at: http://www.shapeoko.com/wiki/index.php/CAD#2D along with others and a link to an article on AutoCAD clones.

YMMV is an acronym frequently used on-line == Your Mileage May Vary.

I downloaded last night and just deleted a dozen svg files that didn’t work out, it was very frustrating to me, especially the black drawing page like I was in outter space. Probably just a cosmetic thing but I didn’t like any of the experience. But thanks, Will as always. I just saw your YMMV and my mileage was in reverse.

Estlcam can load/import vector files like SVG (unsure about DXF) but it cannot save/export SVG/DXF. You can create your CAM paths using Estlcam’s intuitive broken vector methods, then save the CAM file. You then can run your CAM paths using Carbide Motion or other G-Code sender programs (like UGS/Universal G-Code Sender)

Thanks Jim, Carbide Create must have intelligent programing because it is learning how I want to work and is slowly allowing me to open svg files from sketchup and fixing any broken paths with a polyline and the join tool. Also I stopped adding circles into the sketchup file, I just place a v (2 lines) at the center point and than add a circle in Carbide Create. Some drawings I have to include a “border” rectangle around the part before svg’ing and sometimes not. ReSVGing the last part with a rectangle allowed me to write a toolpath for it, without the rectangle I could not write a toolpath.?? I’ve got 4 gcode files written for 4 of the 5 parts for the 1st CNC’d toy. Having success and making progress. CC got scared when I started searching other programs. Still have days until I can order my Shapeoko 3 and hundreds of toys to redesign for CNC’ing. Which one is next??? Thanks for ALL the help.