I don’t think I posted these yet, appologies if I did. These are for a friend who enjoys Skyrim to keep wedding bands safe until their wedding. Made from walnut with a wenge insert, carved with the Skyrim logo. 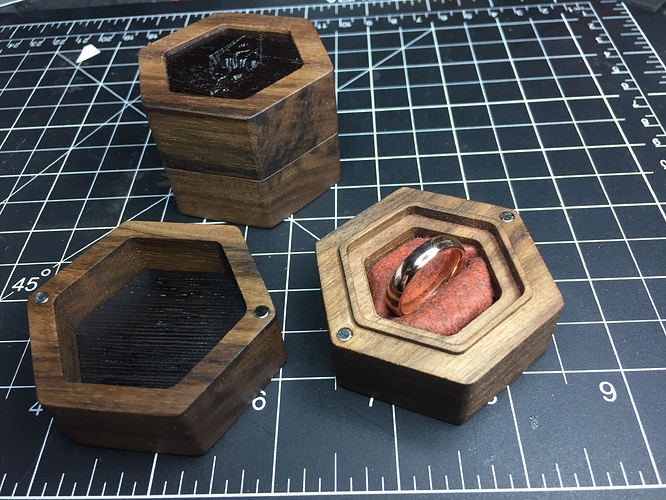 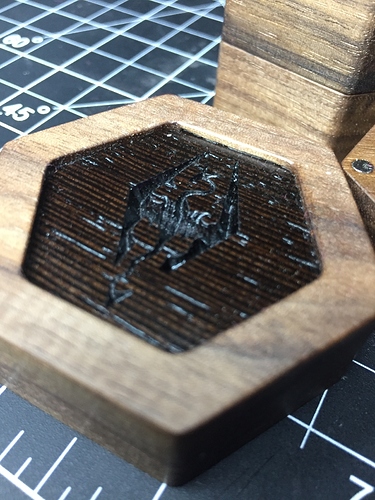 Final step was on my Cricut machine (cnc for paper, chipboard and other thin stock goods) to make some custom packaging for them. 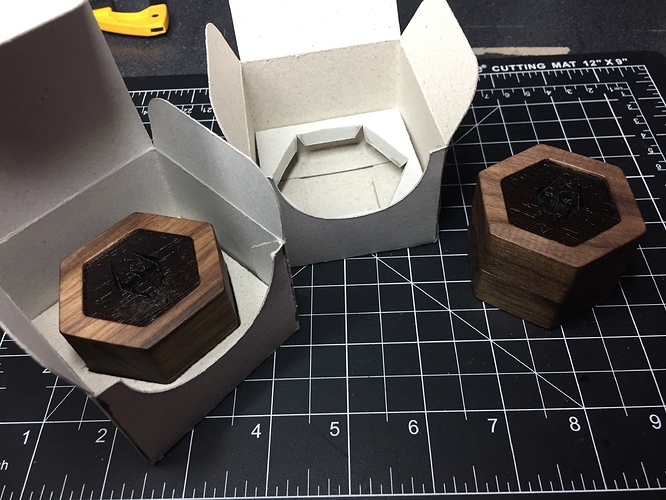 Beautiful work. I remember your other post when you were milling out the basic shapes and I was wondering what they were for. Would be great if you could make a note here with what bits, feeds, and speeds you used, just as a reference. That is an excellent rendering of the Skyrim dragon as well.

I ended up using the Carbide3d 1/8" flat endmill, using .1" per pass, 35ipm feed and 12ipm plunge. I didn’t need a finishing pass with this arrangement. For the carving I tried both 60 and 90 degree V carving bits, some parts looked better in 60, some in 90, but overall 60 looked better. I used this CMT bit and it produced nice results without much cleanup work needed. https://www.amazon.com/gp/product/B000P4NSYG/ref=oh_aui_detailpage_o08_s00?ie=UTF8&psc=1

The vcarving used CC’s defaults which were around 55ipm.

Those are outstanding, fantastic work. Thanks for sharing the feeds/speeds, too.

How do you like your Cricut machine? The cardboard boxes are a nice touch, how did you design those? Can you import vectors to cut with the Cricut the same way you can with other CAM software?

Along the same lines, isn’t it possible to use the Cricut blade in the CNC? Does the Cricut provide anything that the CNC cannot?

It’s pretty simple to make a drag knife and/or mount for the machines:

Need to find the time to revisit my design: https://www.shapeoko.com/wiki/index.php/3D_printed_SO3_Drag_Knife and mill one out rather than 3D print.

I used one of the template generators on this page to make the box:

This page is a resource for DIY artists, graphics designers and everyone who likes paper crafts. It contains an ever growing number of templates for gift boxes and increasingly more other interesting things that can be made out of paper. The...

Sadly it outputs a pdf not an svg, but it’s a simple enough shape to trace/mirror to get the outline. You can import vector files and I want to say you can color code it though I haven’t played with that feature. Meaning e.g. red lines get cut, blue lines get scored, etc.

As for what it adds over using for example a drag knife on the CNC, well the drag knife setups I’ve seen are usually as expensive or a significant portfion of the cricut machine (I have the Explore Air model which was around $200). The cricut uses a very small knife and can do really small details well. You could rig up some kind of mount for that knife in a CNC but that’s just a lot of diy work.

The ‘mat’ system is nice, the mats are adhesive and hold your material down really well and evenly across the whole surface which is useful. Because the mat moves through the machine it can cut really long material without an issue and without a large footprint.

In my opinion while you could easily do ‘paper product’ on the shapeoko, I just wouldn’t want to. The cricut is quieter, a bit easier to use for these purposes in my opinion, and easily adapts to cut, score, and draw. In fact for the boxes I was able to cut and score in a single operation since it can hold 2 tools at once.

I had an old Porter Cable router for which I had a 1/2 inch collet. The router died and I could not find replacement brushes for it anywhere…even same part number for different machines. So I salvaged the collet assembly and built it into an assembly that can fit in the S03 spindle mount. The 1/2 inch collet will securely hold a sharpie and would probably also hold a drag knife.

Will thanks for the reminder on that, I’d seen it awhile back but didn’t have a 3d printer at the time, may try that out myself just to see how it compares.

You shouldn’t need to trace a PDF to get an SVG — just open the PDF in a vector editor such as Inkscape and re-save as an SVG (include an object of known dimension to measure in case you have to scale things).

I’m pretty sure one of the template generators at: https://www.shapeoko.com/wiki/index.php/Online_resources#Paper.2FCardboard outputs SVGs.

Good call, I’d incorrectly assumed it was rasterized but it was indeed vector inside the pdf, will save some time in the future.

I have used two drag knives in my Shapeoko 3: the Donek D3, and the Sign Vinyl Drag Knife for CNC Machines from Widget Works. Both work great, for the right application. (And both have a 0.25 shank, so no adapters are necessary).

The Donek works best for thicker materials and simpler shapes that don’t require a lot of corner actions. I’m cutting organic shapes, and using SheetCAM with the drag knife plugin I’d get dozens of corner actions per inch, and it just didn’t work very well. (But cutting something comparatively simple, such as lettering, it works great.)

The vinyl drag knife doesn’t require corner actions, so it works much better for what I’m doing, but is limited to much thinner material, up to about .01 in my experience, whereas the D3 is supposed to cut up to .0625.

My main question about the Cricut should have been: does it work as well as the Shapeoko for cutting complex, organic shapes out of thin materials, such that I can stop switching my Shapeoko back and forth between routing and drag knifing, and just have an inexpensive, deticated machine for my drag knife work?

My site is pinecreekcarving.com if you’re wondering why I need to switch back and forth frequently…

I’d say just check out the sample images such as here https://cdn.cricut.com/media/catalog/product/full/0/0/0001_9.jpg

It of course depends on your material but I’ve cut vinyl and paper and never had an issue. Here’s a simple shelf I made using the cricut to make a paint stencil: 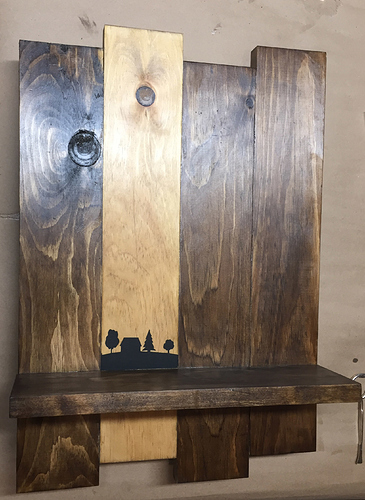 I use a Cricut and I’m pretty happy with it. The cloud based software is the weak point, but it’s not terrible. I do plain old raster images and drop them in. I’ve only ever cut vinyl and light card stock with it, so I don’t know how well it works with heavier materials. I did all of the custom graphics for my bike and think they turned out ok? 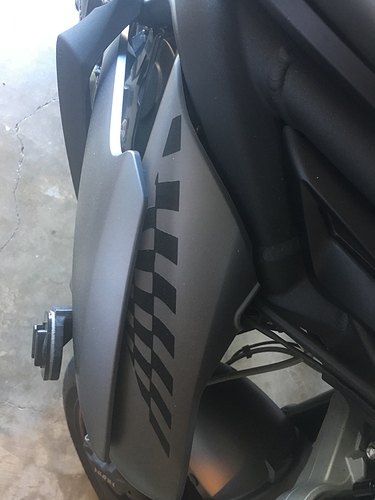 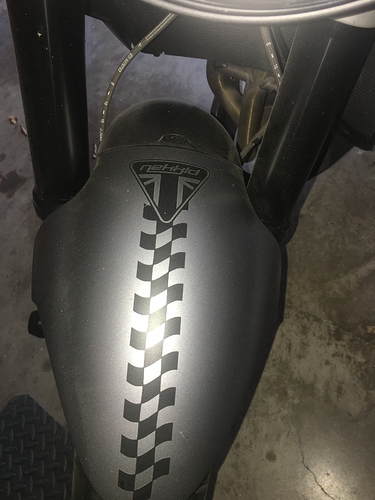 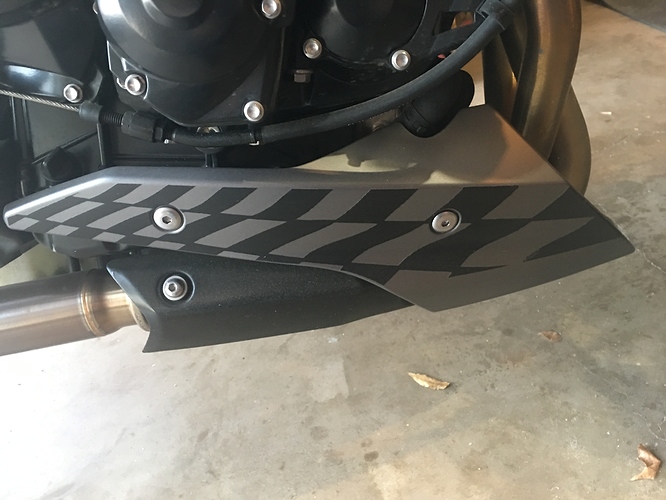 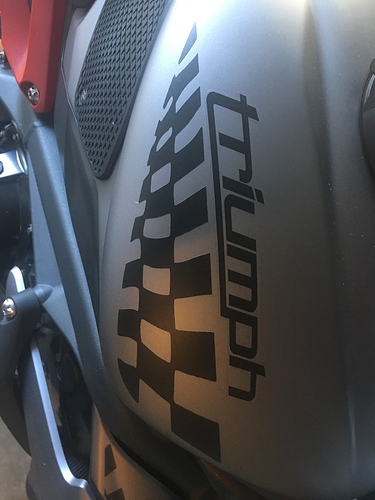 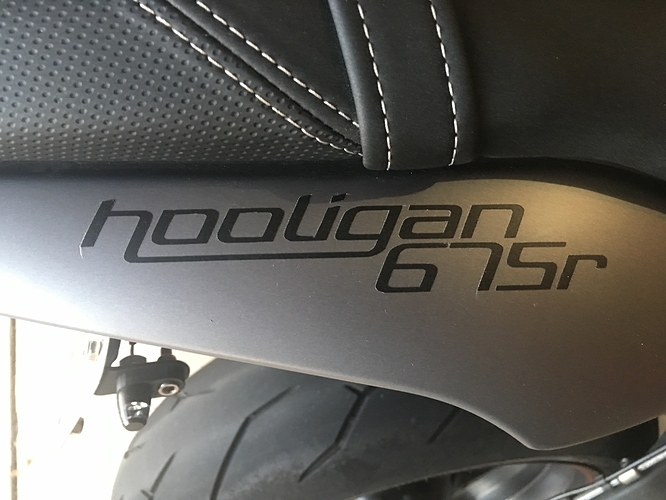 How thick is that card stock for the boxes?