So here's a new one to me

I cut out a lot of names…Baltic Birch, mdf, etc. Probably cut over 200 over the last year. Cut one tonight and after the middles were removed (in letters like a, o, e, l, etc) the profile part of the cut started. I was working on wet sanding a guitar so wasn’t really paying attention, but when I heard the cut finish I walked over and somehow the profile had shifted to the right about 1/4 inch. Not the wood itself, but somehow it’s like the machine moved it’s x/0 over that far. Piece ruined. Never had anything like that happen before.

Anyone have this happen? Suggestions before I lose any more costly wood pieces?

Usual suspects are X belt and X axis stepper pulley set screws. Even if they were tight those little set screws can get kinda mushed at the tips where they contact the stepper shaft and somewhat randomly shift. I think @RichCournoyer mentioned replacing these with socket head machine screws. Those would let you use a larger Allen wrench to tighten/loosen. Add a little dot of blue loctite. If neither those are it, then go for the Vwheels. Other than that I don’t know, it sounds like you’ve cut plenty of stuff without issue, so I wouldn’t think it’s a gcode issue.

Usually problems like this are either mechanical (pulley set screws, eccentric nuts/V-wheels, or belt tension) or a function of toolpaths.

For the toolpaths, also consider adding geometry so that you’re not slotting.

Thanks guys, I’ll do some more research tomorrow night. 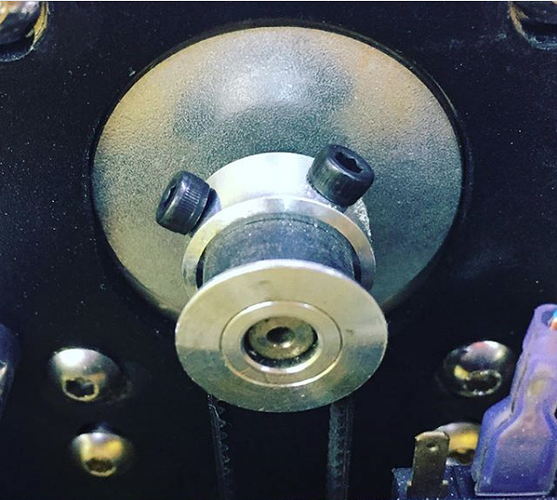 The Stepper motors on the Shapeoko only produce (about) 18 pounds of (Magnetic) force. A loose piece of wood or metal can easily create enough friction to overcome that force and allow the stepper motor to skip one (or more) step(s). It’s happed to me many many times…(Mostly in the X and Z direction, since these are single motor systems).