Flipping through a tooling catalog can be pretty educational…I always find things I didn’t even know existed.

Using Web search to look around doesn’t quite do things justice. I always ask for the tool vendors printed catalogs.

I think he means “mail order” more along the lines of: tear the order form out of the catalog, fill in the quantities and item numbers, and prices. Calculate your total. Write a check or write down your charge card info. Find an envelope. Lick a stamp. Mail. Wait 2-6 weeks and hope nothing got lost, botched, or what have you along the way. No tracking numbers. No instant order support.

Exactly. If you needed to talk to the company you were ordering from, you had to pull out the phone book to see what time zone they were in. If you wrote a check, you’d have to wait for it to clear before they started filling your order, hoping there were not any issues, no back-orders, or damaged goods. No tracking, no email, if you were lucky and nothing went wrong, you would end up with a package with everything you ordered sometime in the distant future. Usually if anything was wrong with the order you would have to send it back with a note before it would be addressed and corrected.

@edwardrford
Given that units will be hitting doorsteps as early as tomorrow (if not today -Monday- in some cases), is the new documentation you referred to at some point now available for consumption somewhere? Obviously, due to some design changes and due to pre-assembly, the finishing assembly, calibration, and optimization steps could be reasonably different from the original SO3 manual. Also, it would be great to know if the GRBL firmware and the default settings have been pre-burned specifically for the XL or XXL configurations and capabilities. If the settings are stock SO3, a table of deltas for the XL and XXL configurations would be a great short-term alternative.

Because you know it happens…

can anyone reccomend good bits for aluminum, 1st timer here

Choosing end mills requires choosing the appropriate characteristics (e.g. diameter, number of flutes, shape (flat, ball, bull nose ends), flute direction (up, down, compression cut) and so forth. Please jump to the putting it all together section if you want a simple summary. What follows are details of how and why to choose certain attributes of end mills. It takes some effort to learn the lingo but it is worth it so one can order end mills directly from a machining supplies vendor or dis…

I use 2 flute,45 helix bits with good finish and cut speed. You can go down to a single flute but these are,for me anyway,hard plastic bits over Alu. I just use uncoated Carbide,fancy coatings are good for the right situation but they ‘normally’ require faster speeds to take full advantage of.

You can go down to a single flute but these are,for me anyway,hard plastic bits over Alu.

Onsrud would have words with you. They explicitly make single flute Al alloy end mills. There are many reasons for using single flutes:

I just use uncoated Carbide,fancy coatings are good for the right situation but they ‘normally’ require faster speeds to take full advantage of.

Uncoated end mills wear out 3-5X faster than coated end mills but cost only 30-50% more. The do not require faster speeds that are out of reach of even the smallest mill or CNC machine.

I have no doubt they do Mark,I use them at work often but I prefer 2 flutes none the less. Preference is not an indicator of performance as you know.

Regarding coatings,I paid £4 a pop for my carbide mills,they wear very well indeed. Can you say you get the same cost/worktime ratio as me? Again,I feel the need to say that this is purely preference.

For a n00b “for me anyway,hard plastic bits over Alu” could be misleading. It’s perfectly good and reasonable to use single flutes. In fact, for small machines, many would do better using them. They are expensive and seem exotic but they aren’t… just uncommon to many.

Like you, I recommended two flutes first. Coatings are well worth the money and allow moving a little bit faster. No reason to not go straight to them.

End mills from quality sources here in the states are US $9-12. Coating adds US$1-2.

Even if they don’t go “peddle to the metal” faster with coatings, when machining metal and hardwoods the value equation points to using coatings - the end mills last a lot longer.

Carbide is not simply carbide; one need to use quality sources. Yes, quality uncoated end mills work fine - they just wear out much faster than coated. When I started we didn’t even see coatings - we only had HSS and we resharpened all the time!

If I could emphasize ‘for me anyway’ I would. I am not saying that single flute bits are not capable at all,Im just stating my preference for the given material,for plastics I wouldnt consider much over a good single flute.

for plastics I wouldn’t consider much over a good single flute.

Onsrud - my choice for single flute end mills - is AWESOME for plastic. Single flutes for plastic - especially when finish is an issue - is hard to beat. We couldn’t agree more!

I use them in pairs - one for roughing and a “special” one for finishing. Really makes a difference for Acrylic and Polycarbonate.

For Al alloy on small mills and CNC machines, single flutes work amazing well, even dry. Two flutes, the old standby, is the usually place to start. I recommend the coatings because the cost equation is so far in their favor… but uncoated, quality carbide end mills work quite well.

It’s really about the budget for the long term. If one doesn’t have the money for coatings, of course one goes for the best they can afford. If one can get coatings, they are rarely going to be disappointed… especially for milling metals (TiB2 or ZrN) and hardwoods (AlTiN).

If one can’t afford the best coating, many coatings are still much better than uncoated.

FWIW, we have a bit on endmill selection on the wiki: http://www.shapeoko.com/wiki/index.php/Endmills

Is it possible for the 2.3 boards to be sent with upgrades to save on shipping two items?

First off, VERY EXCITED to get my new machine!

As far as the PEM concerns…
Having spent several years in the laser/brake/sheet metal world, I am very familiar with the issues/concerns with captive nuts and studs. Have you considered flowdrilling/flowtapping the holes? We have had great success with these and it also reduces purchased parts and cost.

Looking forward to playing with the S3.

This thread is getting difficult to follow because of some off topic posts. I’ll try to summarize…

@Tony - Nice Summary, that looks correct to me!

XXL Kits - We’re stalled shipping these until the rest of the wasteboards show up - at this point they are more than likely not coming until next Monday/Tuesday. More on that in a minute.

XL Kits - We started shipping those yesterday and will continue shipping today and Tomorrow. If all goes well ALL of the XL kits will be shipped by the end of the week.

XXL and Upgrades - assuming that all of the XL kits are shipped by the end of the week, we can focus the rest of our efforts on XXL kits and Upgrade kits next week.

I know that we’re behind our projected schedule, we’ll keep working through the backlog until it’s cleared up. If/when we get some information about the wasteboards, i’l be sure to update this thread.

In the meantime, here are few pictures I snapped yesterday from around the shop. 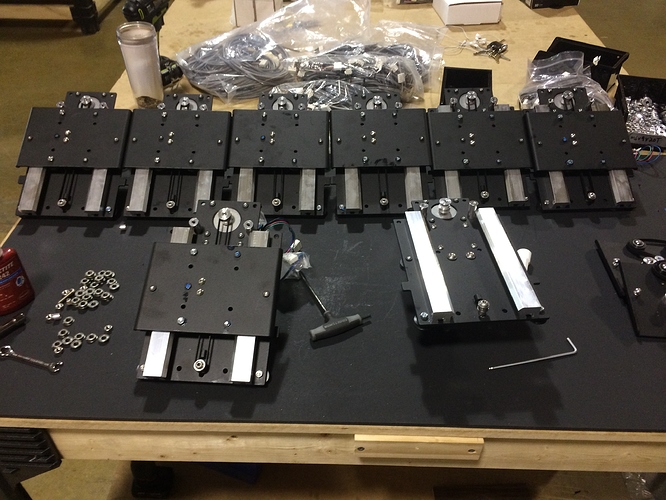 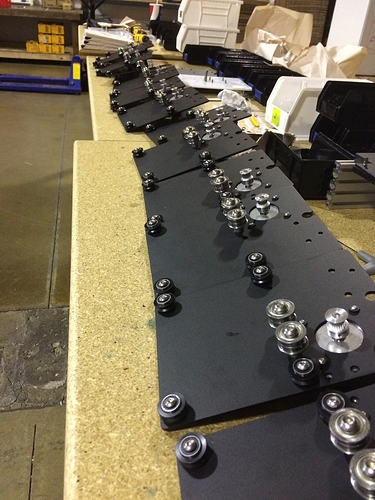 @Edward, curious if the upgrade kits will include just the new Z plate or the X-Y carriage assembly?

If it is the plate only, will this work with the existing X carriage and adjust the belt properly?

The upgrade kits will indeed include the new Z-plate, but not the pre-assembled X and Y plates. But - assuming you’re upgrade an existing machine - your carriages will already be assembled