As one of the folks with the new “super sized” S03 XL/XXL on order, I’ve been wondering how things were progressing. Since today is supposed to be the beginning of shipments, I have been poking around the site looking for signs of life. I know you folks are busy, and I certainly don’t want to have you spending a lot of time fielding individual “are we there yet?” inquiries. However, there haven’t been any blog posts since January, and if there have been any progress updates on the forum I must have overlooked them.

Anyway, I thought perhaps from time to time you could take a moment to update everyone with an occasional quick post here. That way you can avoid the distraction of individual queries, and at the same time keep the villagers from getting restless. It wouldn’t take much, just a few words about how it is going. If by chance you can also mention what order date range is expected to be filled in the coming week (or something along that line) that would be a great bonus.

In the meantime I’ll just be sitting on the curb out front watching for the FedEx truck… (impatient much? not me)

An update would be great, as well as photos and perhaps a video of it in operation?

Yes, please, an update would be lovely. The workbench has been cleared and waiting for some time now.

Those are shipping from our Illinois shop so I’ll ask Edward to post an update here for everyone.

Good time for an update!

Since launching the machines last month, we’ve been hard at work coordinating all of the parts to arrive in time for our ‘week of 3/28 shipping’ promise.

As it is right now we’ll be able to ship a few XXL units tomorrow by the end of the day, but nowhere near the number we were hoping for due to some full orders not arriving yet.

We’ve talked to all of the vendors and it looks like next week will be much more productive, in terms of shipping, than this week - as we’re expecting a large shipment of the remaining parts to be delivered. One those are in, we’ll be shipping units in the same order they were placed, and we’re expecting it to take a few weeks to get all the way through the backlog. Estimating right now I think every single backorder will be shipped by 4/15.

Now that the logistics are out of the way - we have a surprise for everyone!

The new XL and XXL machines are being delivered pre-sub-assembled! That’s right - you wont have to assemble any carriages for your machine, as we’re doing all of those in our shop before packing the machines. Instead, you’ll only have a few components to bolt together before your machine will be fully operational.

We’re working on the updated assembly guide to help you along. Should have that released by Monday (4/4).

Here are a few pictures of the new base-frame assembly. You’ll noticed that we switched out those skinny straps for large formed cross straps! 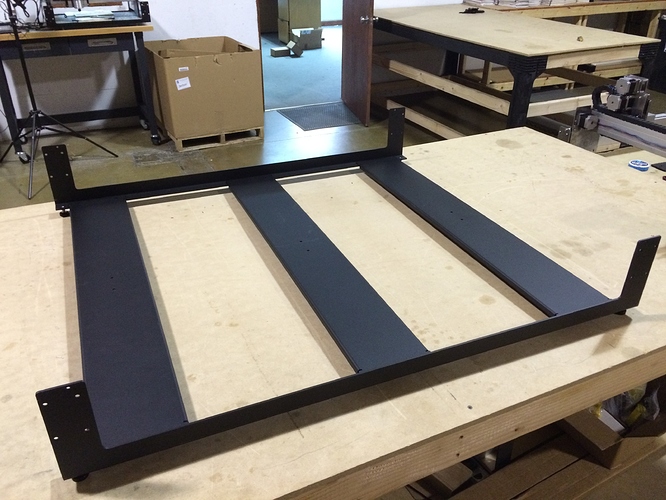 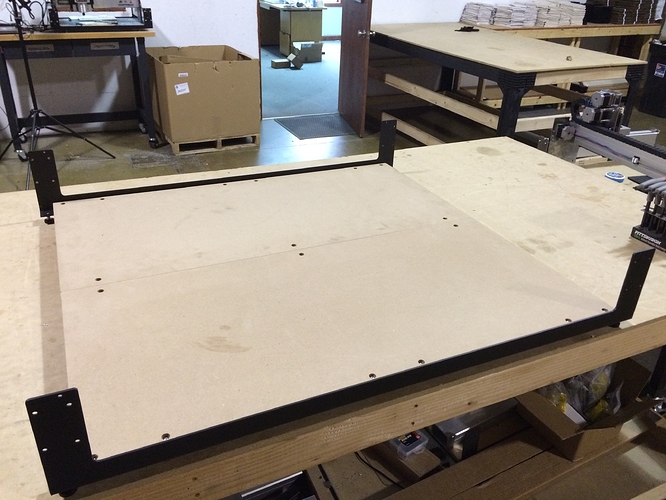 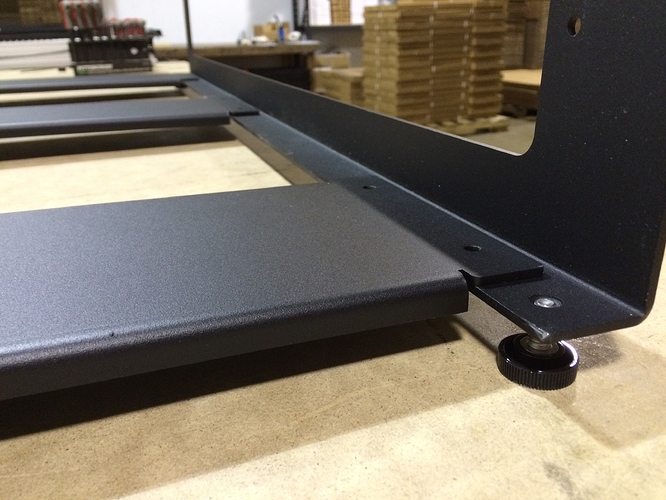 That’s not a terrible delay, but mid-April on is busy for me. Curse my timing.

How about those upgrade kit? Are they ship this week or next week?

Also are you planning to sell replacement v-wheel or we should get it from somewhere else.

Thanks Edward. I couldn’t have wished for a nicer reply to my post. Mid-April is a busy time for many of us, so the pre-assembly is a really nice surprise,

At least now I can tell the dogs to lay off barking enthusiastically at arriving FedEx trucks for another couple of weeks.

Looks like there are a few changes from the current design. Any pics of the new Z plate?

Also looks like a lot of boxes ready to ship on the pallet.

@Lewscrew - there is about 1/2" of frame above the wasteboard. The design is intended for the user to procure a piece of 1/2" material to use as an actual sacrificial layer - leaving the included MDF piece in tact with no need to be replaced.

The boxes on the pallet are actually pre-packaged short extrusions for our standard kits. They’re done with their final op after tapping and are now ready to be packaged into the boxes for stock.

Regarding more pictures - I should have posted more sooner! 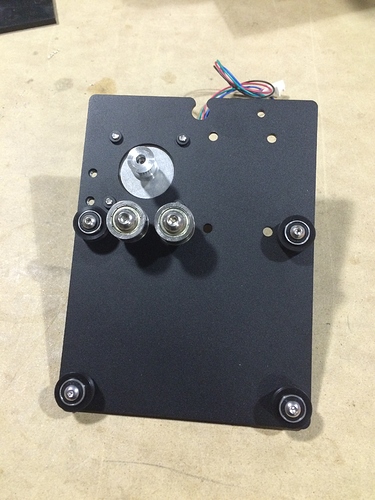 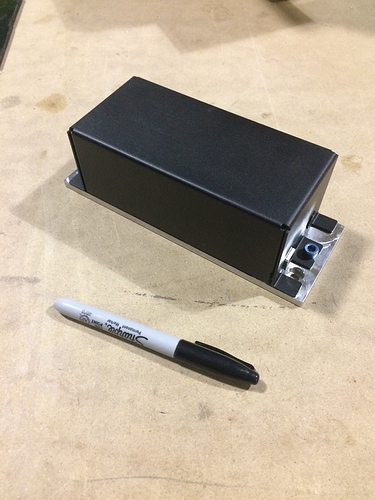 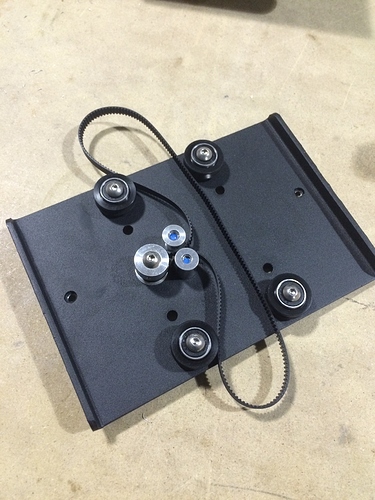 (inside view of new Z-Plate) 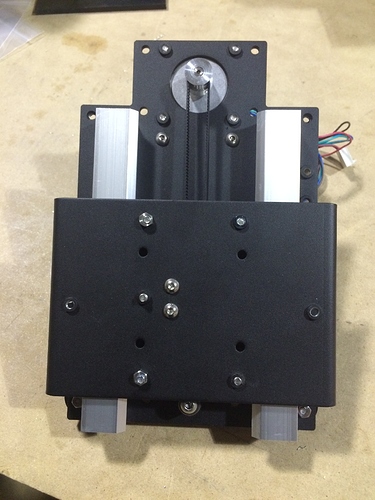 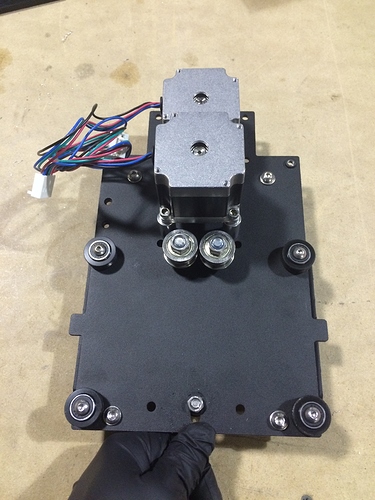 (back view of X/Z Assembly)

Looks really nice, I can’t wait to start playing with it! I have been thinking of additional ways to use this thing. I know the controller has a PWM output and I assume that is related to router speed? What does that look like in gcode standard S command in RPM? If so anyone know the limits as to 0 RPM to 20k for the S command and how that is mapped to the PWM in terms of full on to some HZ value?

If so anyone know the limits as to 0 RPM to 20k for the S command and how that is mapped to the PWM in terms of full on to some HZ value?

I believe that will depend on what you are using to do the speed control, and what you are using for a spindle. For example, I have a laser module I plan to use which accepts a PWM output. I’ve got a DeWalt coming with my SO3, and I plan to order a SuperPID to manage the speed on it. I’ve further been considering the purchase of a brushless CNC spindle and controller, and I may even make a mount for my Plasma cutter, for which I will probably roll my own controls.

The point is, each of these devices has its own characteristics, but all of them can be controlled with a PWM signal in some fashion. Each type of rotary spindle has its own RPM range, and the corresponding control electronics will map the PWM input to spindle speed according to its design.

In the case of the SuperPID/router combo, their site states “0% PWM=5000 RPM. 100% PWM=30000 RPM”. The minimum speed they will run your router at is 5000 rpm, and since this is a closed loop controller, the speed output/control input relationship is presumably mapped in the software. In other words, if desired by the programmer, a totally arbitrary PWM/RPM relationship could be implemented. If a simple PWM pass through is implemented without any interpolation by the controller firmware, I suspect the relationship will not be completely linear, so some “management” is probably desirable. I’m sure the SuperPID folks would be happy to give you a more authoritative answer on their product.

I was thinking laser myself. I can build my own post processor but wanted to know pwm to S gcode values. I guess I could always check with various values on an oscilloscope.

You can set it in the Grbl code and recompile it.

Thanks for the updates, Edward. Its such a pleasant surprise to know the carriages will be preassembled. Your brand is growing every time you go the extra mile like this. I can’t wait to see what you guys come up with next.

[Edit: Rewording my statement due to unnecessary snark.]

Hi Ed, I have sent a few emails about my order, but haven’t gotten replies from anyone on the team. Can someone reach out?

Chris, I saw your pre-edit post, and it wasn’t all that bad, just frustrated sounding.

FWIW, I got a very prompt response to my inquiry here when I started this thread. Perhaps the email queue has simply been a casualty of the crush to get the new machines out?

I understand your frustration though, I have been trying since last weekend to get a reply to a simple “when will it ship?” inquiry from a small CNC vendor who has just under a thousand of my dollars. When we send big piles of money to strangers on the Internet, our feeling of trust lives and dies based on response and communication.

Everything I have experienced to date makes me feel very good about Carbide.

I so want one of these kits but i was hoping for an extended Y but stock X as Im at gantry SWL already…any chance this will ever be a thing?

That new Z plate would be very welcome now it has folded edges,that will stiffen it nicely!

Edward, thanks for the clarification. The replaceable waste board is a great idea. The new Z plate looks great. Will the Z plate come pre assembled in the expansion kits?

I also see a few other changes in the photos.

I noticed that you have two pieces of MDF on the frame for the XXL. I was planning to replace the base MDF with a single piece of Melamine coverd MDF. This has a Rockler trac hold down system on it that was built for the XXL. This was when i thought the XXL was not pre-assembled. One complicating factor is that the Melamine hold down system is 3/4" thick not 1/2". Any thoughts? since there is no hold down system on the router Here is a link to a picture of a “similar” hold down table with Rockler channels. I’m building my own to fit the XXL footprint.