SO3: Is anyone else having as much trouble as me?

History:
I purchased my SO3 in January this year. It arrive Jan 13th to be exact and after the weekend, I was making chips. Cool

The problem:
On March 3rd, I noticed the X-Carriage had begun missing steps and the part I was cutting was now offset. Suspecting wood chips or ? had gotten under the belt I dug in and found a portion of the belt was smashed and actually look as though it had melted. 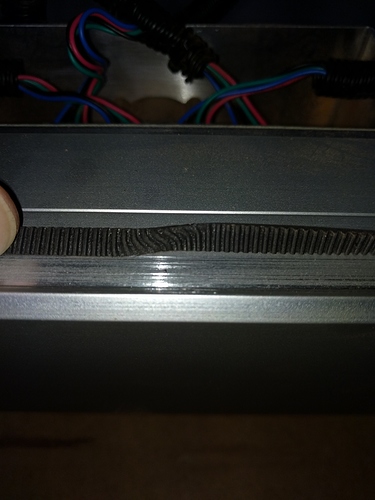 Now if you look closely at the image you can also see scratches on the x-rail. 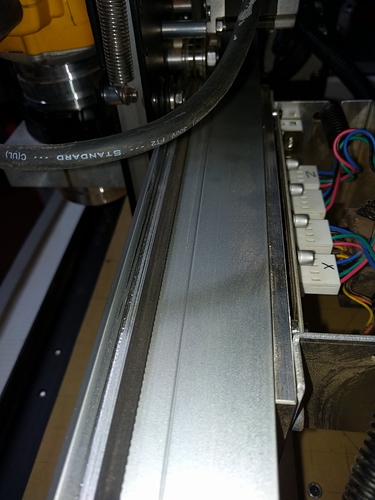 Here is another angle.

So now let’s find the source of the problem… 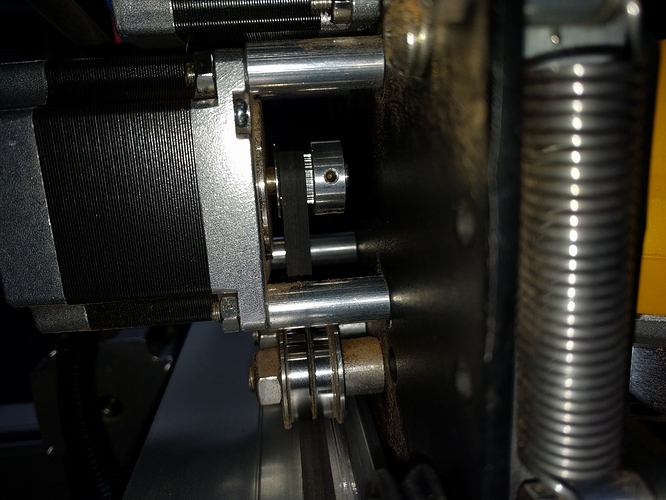 That was easy, it’s the idler bearing for the X-Belt. It is actually supporting the top of the X-Carriage.

Emailed support, we talked a little, we came up with some ideas and since I travel a lot, we didn’t rush to get a solution out right away. Last I heard from Ed was on March 16th, he was going to test somethings and get back to me.

Fast Forward to March 31st. Had not heard from Ed or anyone on the team, so in the meantime I replaced all the belts on the machine, cleaned up the x-rail as best I could and added some shims in the mounting holes for the x-carriage v-wheel bolts. Everything was working well enough to knock out a few more “SIMPLE” cuts. Until the Z-Carriage started to stick and miss steps.

I disassembled the machine again and investigated. 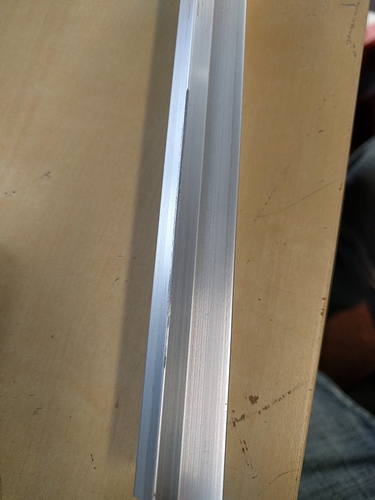 In case you can see it very well, one of the z-rails had been flattened (the dark line is actually the area ground down by something). This is the Left z-rail to be exact. What could be causing that??? 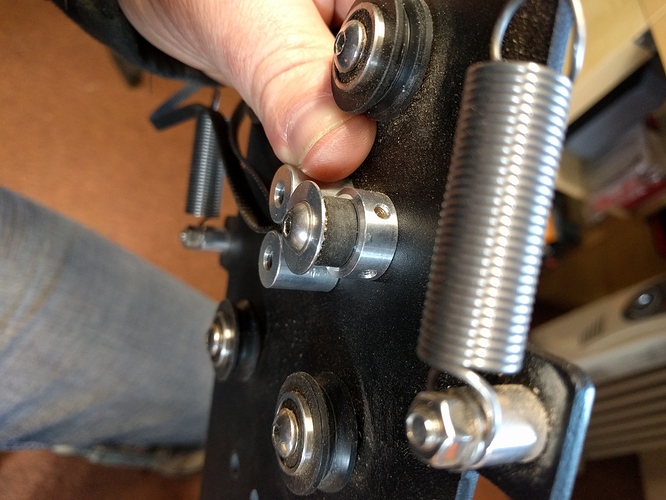 Again, a little hard to see, but if you look closely at the stationary z-belt pinion gear, there is a dull spot between the two set screws, it is rubbing on that z-rail.

Reached out to Ed again that day. Sent him pictures, description of the problem, etc… and unfortunately still have not heard a peep from ANYONE since March 13th.

I’m usually a VERY patient individual, but in a follow up email, I even asked for them to quote me the costs for new parts and shipping, don’t care at this point I just want to see this thing cut a few more pieces of wood!!! NOTHING… Not a dang thing.

I was ok until last night when working in the shop to try and make this hunk of metal move again with what I have and my wife walked in and said “You bought this so you could enjoy your hobby, this thing has done nothing for you, but make you mad and waste your time”.

So this is my desperate attempt to get SOMEONE to pay attention to me and I really hope it works. I’m just about sick and tired of this dang thing breaking down every two cuts due to POOR Design and BAD quality control.

First, let me apologize for the delay getting everything worked out. Edward and the IL team have been crushed under the XL and XXL shipping so I think a few things have been missed in the mean time.

I’m not sure what’s causing this (I’m not the Shapeoko guy in the company) but I’ll get it taken care of tomorrow for you.

Can you send an email to support@carbide3d.com with the subject “FOR ROB” so that I can find it and see your ticket history?

Sorry again for the trouble.

I have had this problem myself.

I didnt get an answer from anyone there so i did a bit of digging and found one of the top V wheels had a bent bolt. Easily done as the stock fasteners are done to a budget and I probably over torqued the bottom wheels,i changed the bolts to a hardened socket cap and I have been drag free ever since.

There is a solid chance you were perhaps over zealous with the wrench,Im not pointing fingers as I made the same mistake so I know what im looking at…and its easily rectified with new fasteners.

Where / how do you think this sort of thing should be cautioned against?

I did add a note on the wiki: http://www.shapeoko.com/wiki/index.php/Parts#Screws.2FBolts

Note that when securing a fastener, one must be careful to not overtorque or twist, or even bend it.[8]

This was more about over torquing the eccentric v wheels to the rail causing the bend. Not general fastener practice. Its perceived as good practice to get everything tight as possible,in the case of the V Wheels this is not so.
The fastener/wheel assembly looked straight,it was only when I removed it from the machine that it was seen. It could do with a precision bushing tbh but the cost would be a turn off for some.

Thanks. I added it to the V-wheel section of the Makerslide page.

Appreciate the thought, but unfortunately this is not the issue in my case. For my machine it is simply the fact that the mounting holes for the bolts are too large and over a short time of use, those bolt move their way to the top or bottom of the hole allowing for the parts to touch.

Based on posts I’ve seen regarding the XL, it sounds like this issue is now resolved.

Well,if this is a known and repeating problem with a design issue at heart rather than ham fistedness then I will not be amused if early adopters are just left in the cold…
As mentioned in my last post,they do need a bushing in there.

Agreed and I did read your post and it sounds like you have shimmed the mounting holes too… However, I dare call myself an early adopter, my machine is #1384. In theory, that is 1383 chances to resolve.

Ed did respond to me this morning via email, but in his first sentence, he offers to replace the Y-Axis (L&R) so I’m concerned he hasn’t even read my posts or emails regarding my primary concern. I can’t understand why he’d lead in with replacing the only axis on this machine that actually HASN’T given me any trouble. I would think you would start out addressing the documented problem first.

I’m really at a loss for any hope at this point and beginning to realize I will probably have to scrap much of the machine and build my own or bite the bullet and hope that ordering the XL will resolve these problems since the new design appears to have limited this issue. Darn shame, would have thought I’d get a few more cuts out of this thing at least before having to scrap it.

I know that there have been other QC related reports on the plates. Try sending them another email reiterating the issue.

Ed called me on Friday and we discussed the issues with the machine. It seems the holes for the V-Wheel bolts should have a nominal margin of play, approx .4mm and it turns out every hole on all my X,Y, and Z plates has anywhere from .8-1.4mm of play.

Bolt diameter is ~4.8mm and the holes range from 5.6-6.2mm depending on how much powder coat has worn off during assembly / dis-assembly.

With the new design having PEM nuts pressed into the plates, I suspect the problem should not creep up for any new machines shipped past this point, but there may be others out there with similar characteristics as mine.

As for the stationary pinion gear on the Z-Axis, not 100% sure if the bolt holes caused this or what, but suspect again, that the new design might eliminate the potential for future troubles in the same regard.

All told, Ed is going to send me some pre-assembled / pre-tested assemblies and we both hope this remedies my problems for once and for all.

All hope is not yet lost. My thanks to those who suggested areas or parts to investigate. I’ll keep you posted as to where I end up in the next couple weeks.

Till then, the shop remains quite

I will have to measure mine up too,I thought it was just a bent bolt but after reading this thread I went back and checked to see if the Z had dropped again and…sadly,it has.

I will strip it and measure the bolts and holes.