This is for all of you out there that have access to a 3D printer.

I designed and made this dust boot because I was not satisfied with the one I bought. More pictures and source files can be found on thingiverse.

Pretty much everything is 8 mm thick, its built like a big fat tank.

I tried to use magnets instead of thumb screws but, when I was placing the magnets in the printed pockets while printing, the magnets always lifted and stuck to the hotends resistor wiring so, I gave up on magnets.

Yeah, that’s the one thing I mislike about my B3 Pico.

Wish there was a good non-magnetic all-metal hotend.

Nice. I used a combination of fiber board and 3D printing for mine. I keep the brush frames attached to the shoe with magnets that I press fitted into the brush frames after printing. I haven’t had any issues with the magnets coming out. I have a couple of brush heights for shorter and longer bits. I also put in a clear tube for attaching the vacuum hose so that I can look down through the shoe and see what’s happening during a job. 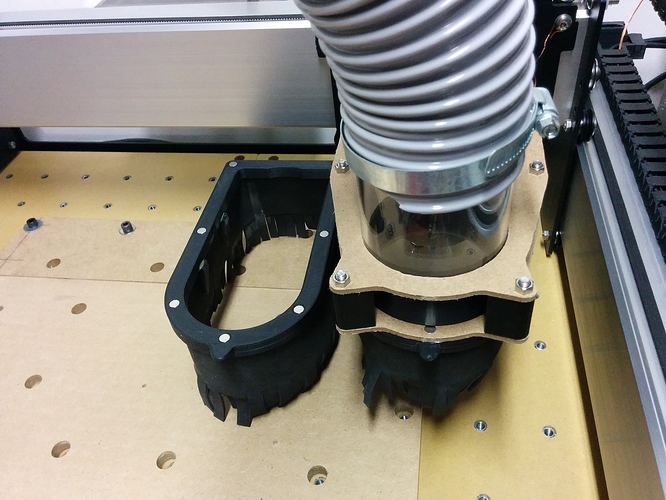 I don’t bother with a brush, and my current design is milled (no 3D printing required). 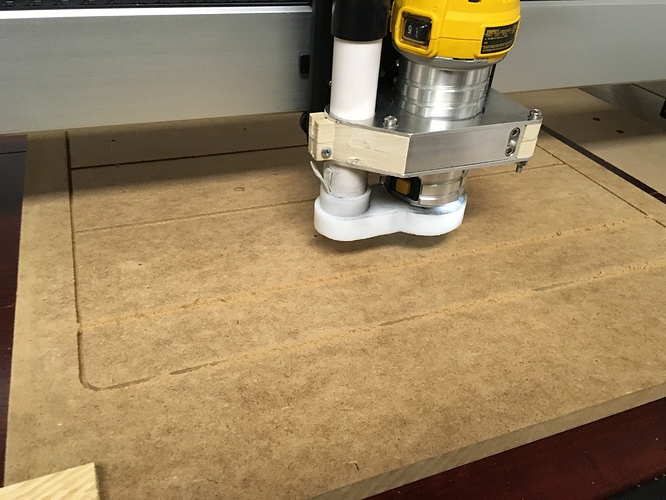 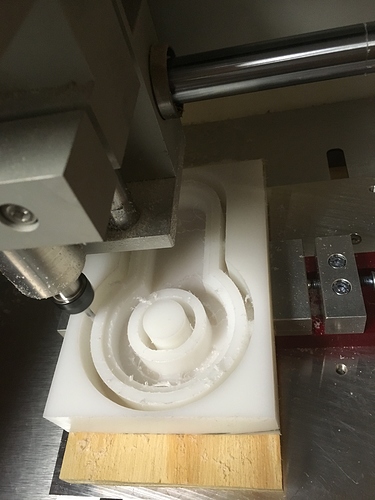 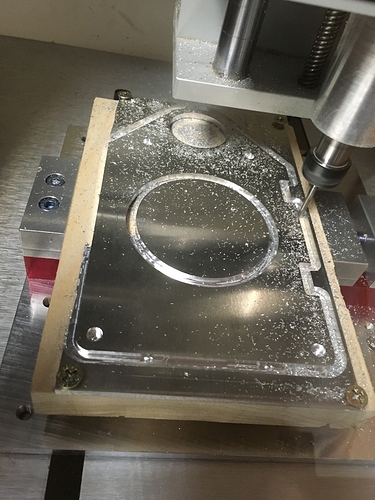 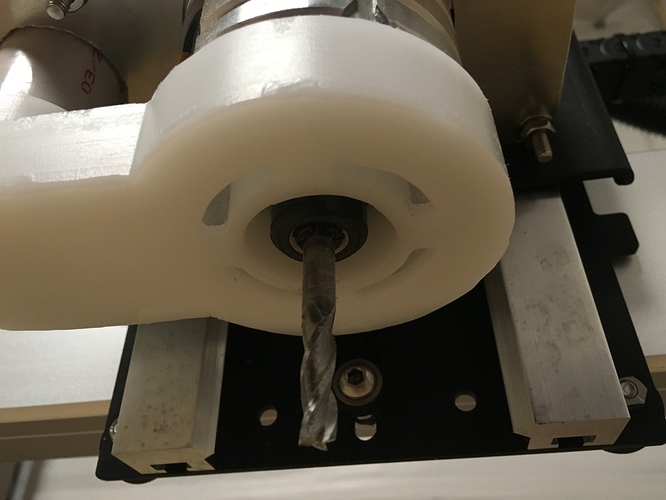 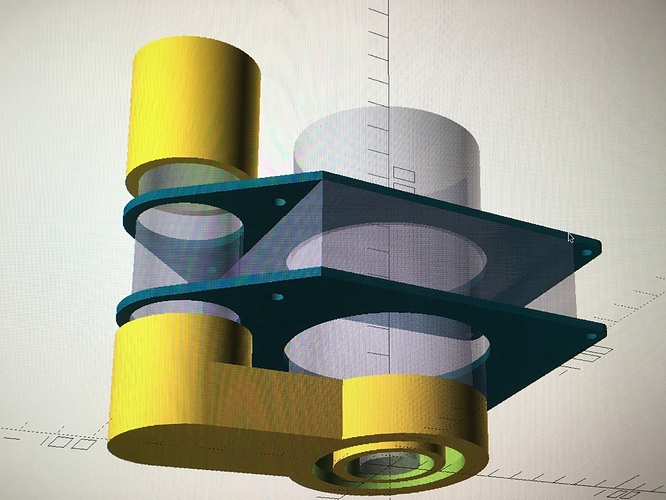 I don’t bother with a brush, and my current design is milled (no 3D printing required).

Similar mount design although not as nice as yours, but at the time cheap and quick was the goal.

J-Head from hotends.com are brass. This is ehat I have but, my magnets were getting attracted by the resistor wire.

I had made pockets to hold the magnets because I was affraid press fit magnets would not be solid enough.

Yeah, those are nice options, I am so used to think in 3D, that I forget a good 2.5D design would also cut it.

Working with Fusion 360 makes it so hard not to use the tools to do 3D modeling. Its an addiction I think as well as the lazyness of pressing 1 button to print and get the pard you want without additional worry.

When you mill MDF, does this catch all the dust?

J-heads have a lot of plastic in them.

I use up 2-3 j-heads from hotends.com per year. I only print in PLA so I do not need need the “all metal” thing.

I am also too lazy to recompile the firmware and re-tune everything. Haven’t updated marlin since 2014.

My budget won’t stand that — bought a Pico from B3 Innovations and haven’t looked back.

Very nice design! Thank you for sharing. You mind sharing your source for the sole inserts? I cannot find anything that is not too long (most of them seems to be around 9mm long).

I get my hardware from aliexpress. I cannot find anything anywhere here, and importing stuff from the states to Canada I always get slammed with import duties. Stuff from China takes 4 weeks to get to me but without added duties and processing fees.

I hope this does not get this thread too far out of its original tracks, I thought this might be the best place to ask. I have been wondering this for a while now: wouldn’t adding a dust boot and associated vacuum cleaner hose affect the accuracy of the machine? After all it adds side force and weight, to the whole spindle assembly.
I have been considering adding a boot to my machine, but I am worried I would lose accuracy and eventually even develop play in the assembly because of the added weight and drag.

Hang / arrange the hose so that it doesn’t interfere — the effort needed to move the hose around shouldn’t be too much more than is already used up to manage the wiring, and ought to be significantly less than that of holding in place / moving against the cutting forces.

Moreover, given the detriment which re-cutting chips poses to the endmill and ultimately cutting quality, let alone the hazard which airborne dust represents to one’s health, there’s no reason not to use dust collection, and every reason to have it.

Since this topic deals with dust shoes and their costs/benefits, here’s my Dewalt hack posting made awhile back:

Anyone tried or thought about adapting this to the S3? Shapeoko

Since this is a dust shoe thread in essence, I thought I’d post up my “hacked” version of a Shapeoko/DWP611 dust shoe combo. First, I’m not claiming this hasn’t been seen or done before, I just have stumbled onto it. With that premise, let’s continue… There are some cheap options when it comes to dust collection attachments for the DWP611. This popped up when I did some Googling straight away: http://www.acmetools.com/shop/tools/dewalt-dnp615 Since my router is dedicated to the Shapeoko…

I’ve since been playing with the notion of variable depth brush options and this is the latest hack use cheap HDPE containers. 2 strips of electrical tape, infinitelyadjustable and quite effective at chip/dust erradication. 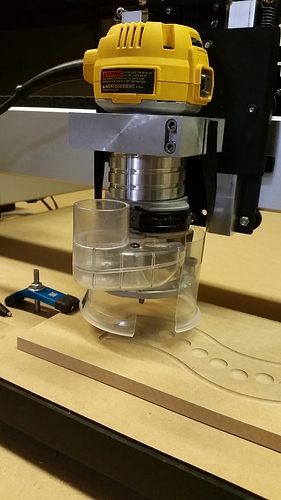 That sounds good. I might modify it to use something I have then. 200pcs of that will sit around for a while and I will probably take a while to get it based on my experiences on Aliexpress.
Thank you for sharing that!

This is great thank you. Will print tonight.

I created another 3D Printed dust shoe. This was inspired by Jason’s efforts from a different thread.

While not perfect, meaning still dependent on the Z axis, I find handy to be able to adjust it during operation.

Ike Dust Shoe for the Shapeoko