Okay, I love using my SO3 to make workshop accessories but unfortunately I don’t use Carbide Create so I don’t qualify for the contest. But, I thought I would post anyway and start a new topic for workshop accessories that don’t qualify for the contest. Now its not that I have anything against Carbide Create. I have not used it enough to have any opinion. Its just that I never got around to using it. I have SO3 #206 from the second shipment way back when and Carbide Create wasn’t available then. I started with Fusion 360 and I’ve just continued to use it. I like that I can do complex 3D design in it and then use the CAM tools for either my S03 or my Rostock Max 3D printer.

As for the workshop accessories, I admit that a couple of them are stolen ideas from projects that others have posted. Hopefully if others post their I’ll have more ideas to steal from

. I’ve also posted a couple of these previously so hopefully no one will mind the repeats. Some of these are simple items but they would still have been hard to do without the SO3 so I think it helps show how versatile and useful an SO3 can be.

First up is my set of SO3 helpers: 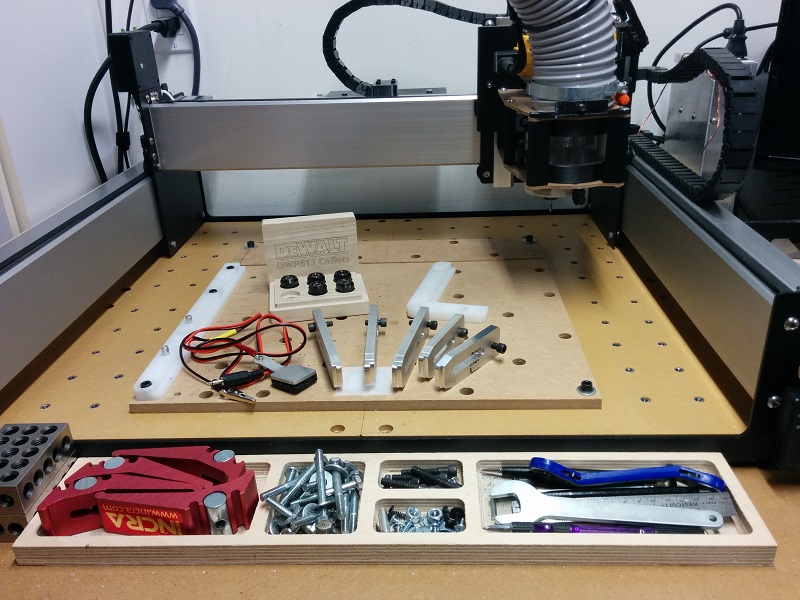 In the photo are:

I added a SuperPID to my setup and I’m still loving it. I posted about it here: http://community.carbide3d.com/t/superpid-build-complete/4618 but here’s a repeat picture of the case and heatsink which were done on my S03. 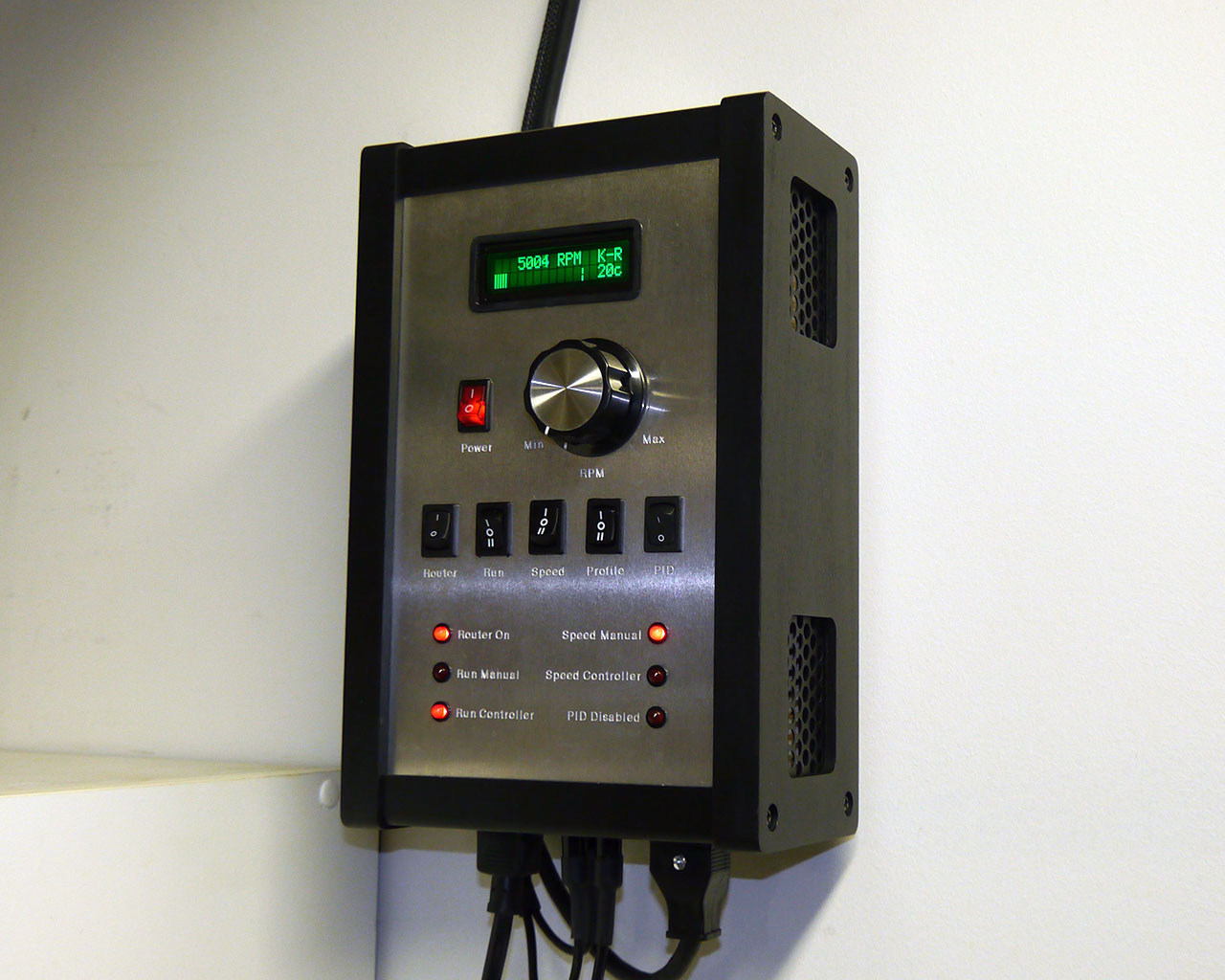 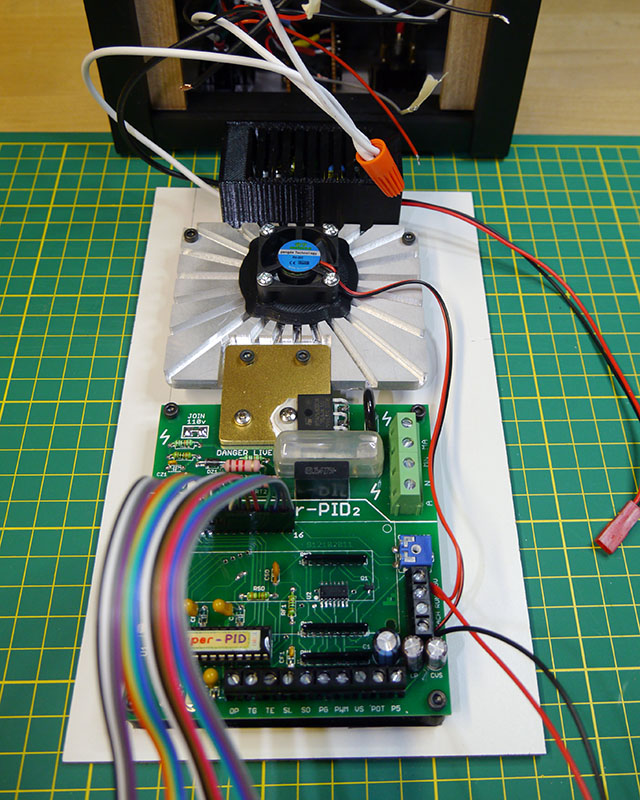 I built a Thien separator for my dust collector. 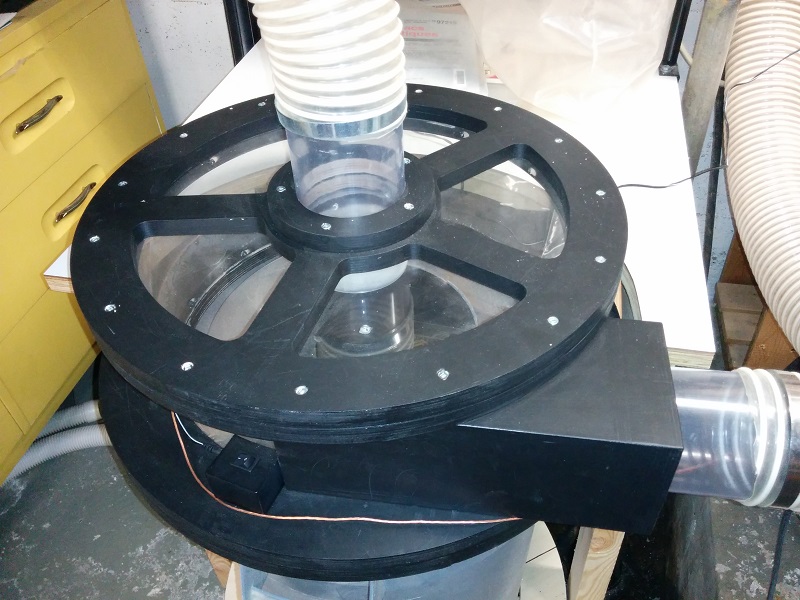 It’s a tophat style that sits on top of a garbage pail. It works incredibly well. You can see the bottom of the dust collector’s dust bag in the background. It has some dust lining it but its basically empty. I’ve emptied the garbage pail a many times since I added the separator and the bag is still empty. Although the outsides of the plywood pieces were done with a bandsaw the internal cuts were all done on my SO3. Also the inlet piece was made from several separate plywood pieces carved using the SO3 and then glued together. You can see that more here http://a360.co/2wq0Dc2 if you use explode model.

Here’s a shop accessory in development. I’m in the process of designing and building a CO2 laser cutter. It’s based around using OpenBuilds V-slot extrusions but with a lot of custom brackets. Here’s the basic design: 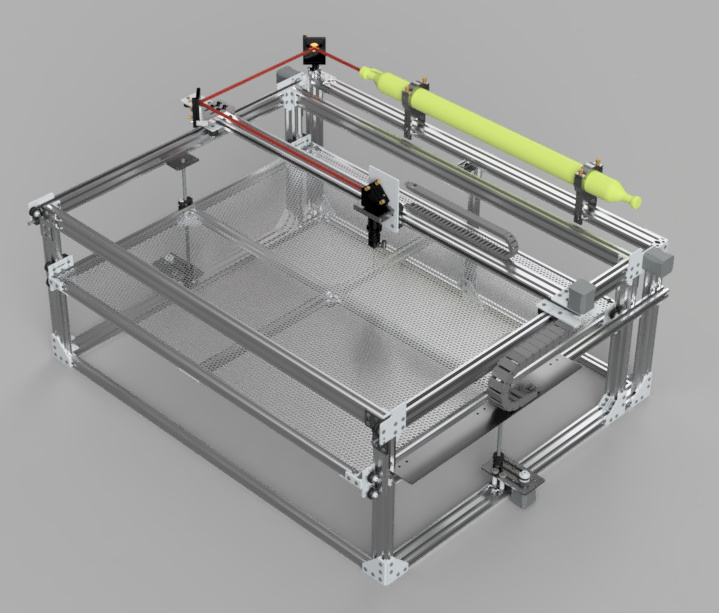 I’ve been slowly gathering the pieces for the build and working through creating the brackets and mounts I need as I get the pieces delivered. I’m cutting most of the brackets from 1/8" 6061 sheet aluminum and the thicker brackets from 1/2" 6061 plate. Its much cheaper to go to the local Metal Supermarket, grab some offcuts and then cut my own brackets versus buying them. Plus I can customize them. Some of the completed pieces below: 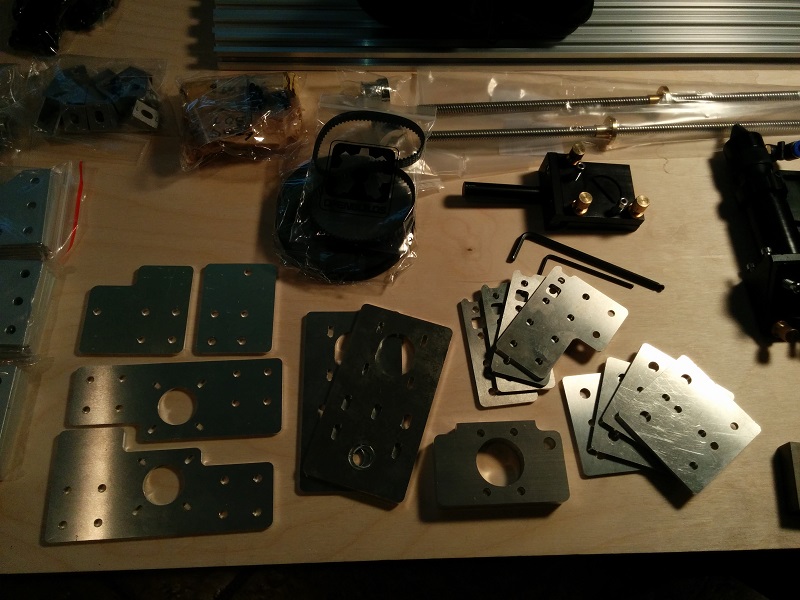 I plan to use a CNC PI Shield running GRBL to control the laser and I needed an extra stepper driver because I’m using five steppers and the CNC shield only provides 4 slots. Used my SO3 to create an little driver ‘duplicator’ board so that I could plug two drivers into the z-axis driver slot. Okay, maybe a stretch for workshop accessories but it does show you can do PCBs with the SO3 as well as cut wood, plastic and aluminum. 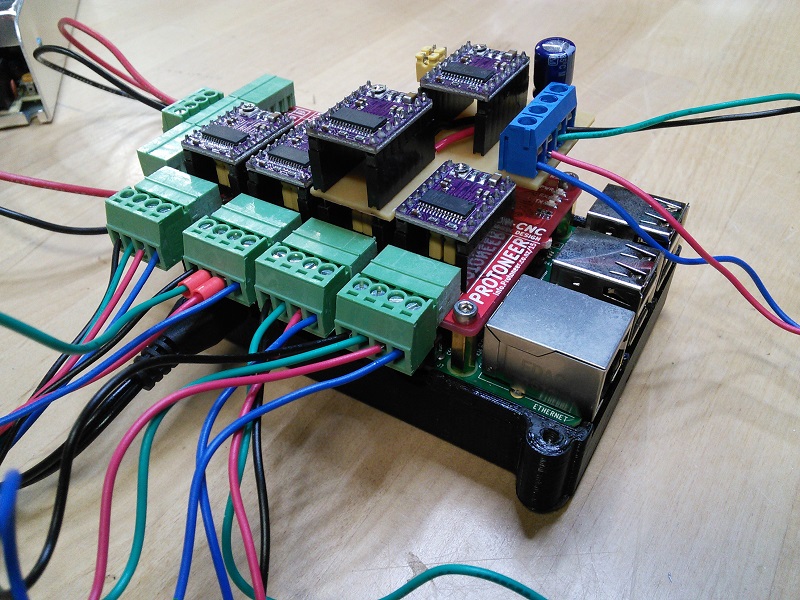 And last and probably least my crap collectors. Just some MDF with round recesses cut into it and then some left over acrylic tubing glued in. It replaced the random collection of jars I use to use. 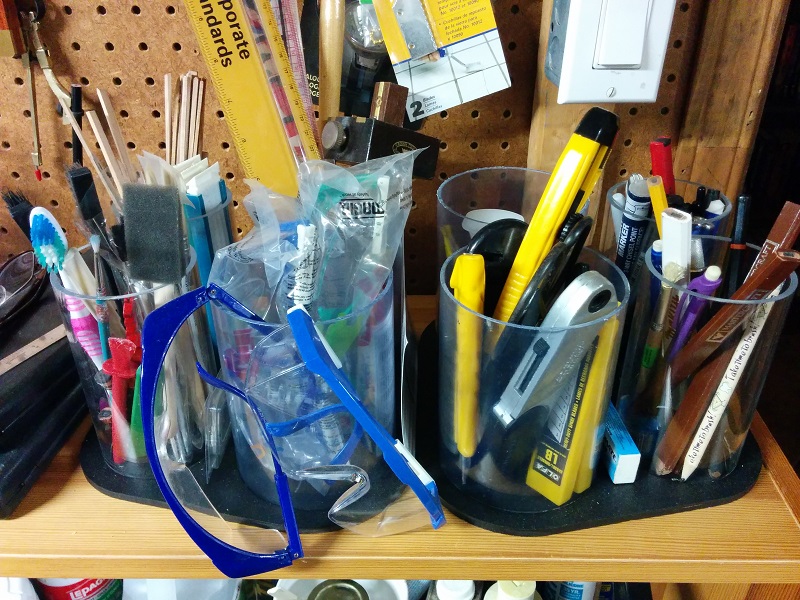 So, post those shop accessories that don’t qualify for the contest. I can always use some more ideas to steal.

I love some of what you have here.

I to have a number of accessorises that come into this category. Such as dust boot, various clamps, a threaded aluminium table, tool holders, a 2nd probe, magnetic accessories, and storage gear. I even have a design for the electronics enclosure…

I can post a number of fusion 360 designs and wonder if we should collate a bunch of useful designs?

I don’t see any reason not to post your designs. Especially since with the Fusion 360 sharing capability you only need to post a link and anyone interested can download the designs in their format of choice.

Like you, I’m primarily a Fusion 360 user, but I’m working on learning V-carve so I can do some inlays. Here is a simple endmill holder that I made, but I engraved it with the corresponding numbers to my number system for tools in Fusion. Much easier way to prevent confusion and gives me an intuitive way to label my tools.

The design in Fusion: 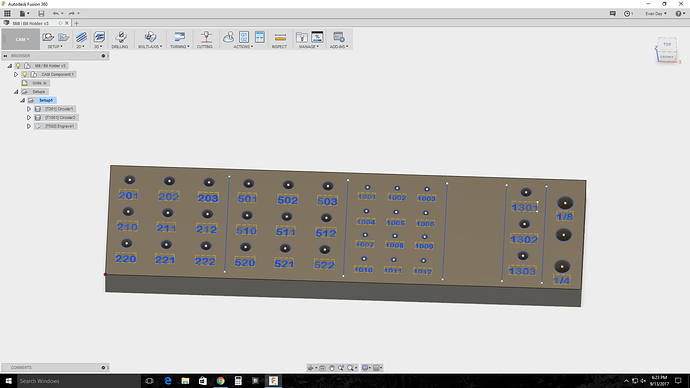 At this point I don’t have anything original to share but I would really appreciate any F360 designs/links you more experienced guys might be willing to make available.

I hope to make a few contributions myself at some point.

Well here’s two simple things, however please tell me ways that I can improve them. I am just a hobbyist, so I’m still learning as well. Everything I do has room for improvement.
The link to my end mill holder above, which should help with just some basic design stuff and CAM in Fusion:
http://a360.co/2wxg9kY

Here are some Cam style clamps (referenced in this post):
http://a360.co/2tUSZrY

My Fusion 360 tool library, which I continue to update and build as I get more tools on hand or as I use them on different materials (I try to update feeds and speeds settings as I go):
http://a360.co/2srKCyO

Here are a few things I’ve made based on others designs, except for the one piece junk boxes I cut from some oak scraps, my own design, haha. 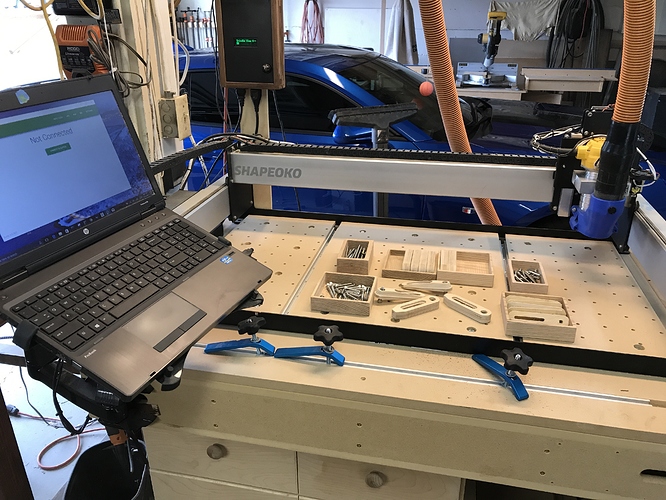 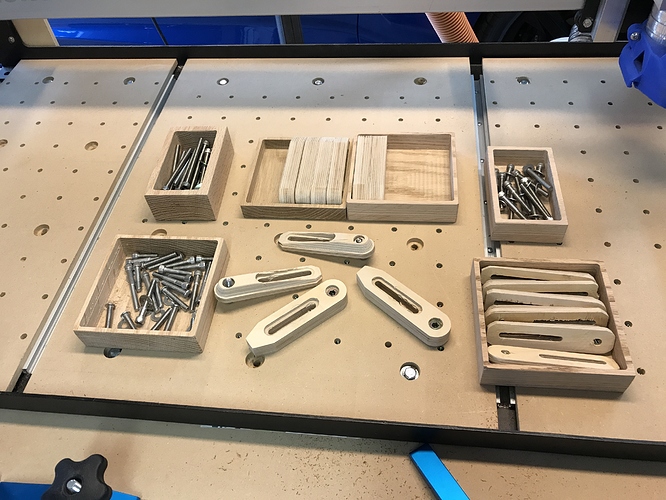 Been thinking about an end mill holder, I’ll give yours a whirl. The cam clamps too!

Evan, knocked out the end mill holder just now, left as you designed it.

I saw that your CAM default measurement is inches. I’ve switched over to mm for CAM after encountering grbl errors, per recommendations on this forum. I still design in inches, hard wired that way I’m afraid. Anyway, I left the CAM process in inches, worked fine this time.

Only trouble was the sapele scrap was slightly warped, the engravings on the right side were too shallow. Carefully shimmed that side with some folded paper, all’s good now. One pass through the planer evened everything up. 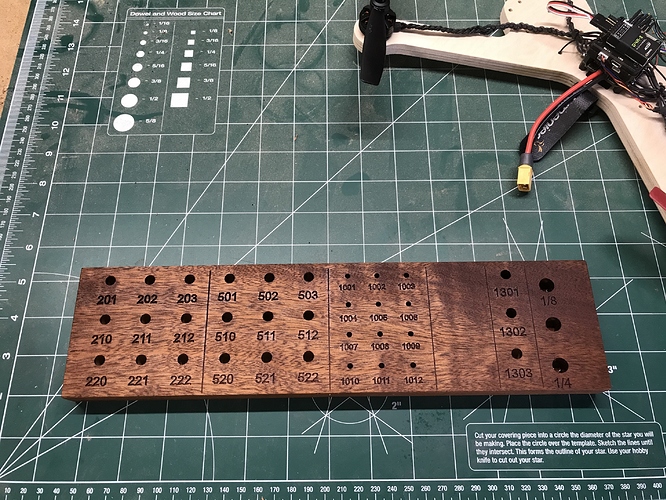 If I remember correctly, the recommendation for F360 is to switch to mm just before you do the post processing step. I believe you can work in inches all the way up to that point without worrying about “bad” gcode files.

Correct. You may also need to turn off ramping in.

This is an old topic, but I wanted to update this with latest info