A few questions about spindle options:

I see that carbide 3D offers a spindle. The compact router.

How does this stack up with the Mikita options or with the dewalt options?

Is it compatible with the dewalt router used by inventables? I modified one for my XCarve with the superPID to control speed and would love to keep that option with the pro kit.

The Carbide Compact Router is much the same as the Makita — the collets, brushes, bearings, &c. are compatible and interchangeable. Differences:

Or, see the video: 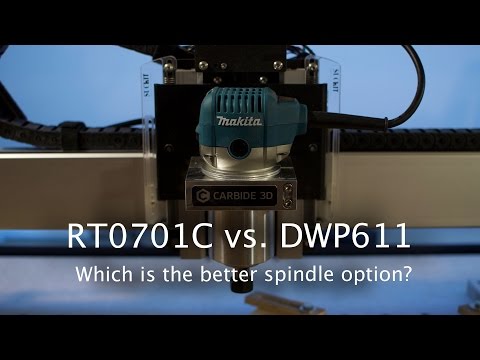 This are 60mm spindles correct?

In terms of HP, if I get the Carbide Compact it will be the same as Mikita or Dewalt?

Can I control carbide motion with a standard gcode sender so that I can use the superPID with it to hold and control spindle speed?

Any of the 3 spindles have basically the same power. As for controlling Carbide Motion with another gcode sender, no you cannot. Carbide Motion is a gcode sender. It can control spindle speed as well as long as it is configured to do so and you have the necessary hardware. I believe you can wire up a SuperPID to the control board, I just don’t know the specifics.

As @nwallace noted, if you install a relay such as our BitRunner or other speed control hardware then G-Code will turn the spindle on/off, and possible adjust the speed as well.

Will all this 3 fit in the Shapeoko pro Mount ?

I know that both 65mm options will fit, not sure if they have a mount for the DeWalt option.

not sure if they have a mount for the DeWalt option.

Yep, the option was added recently: If you have our Shapeoko HDZ upgrade, a Shapeoko 4, or a Shapeoko Pro and want to fit a 69mm spindle, this is for you.  It's a custom-made, precision machined, aluminum mount unlike any other. Important information: Only works for...

The Makita or Dewalt are good routers. There are a few differences that may make a difference on which one you decide to get.

Minor nitpick but the Carbide Compact Router, Makita and DeWalt are routers, not spindles. If you confuse the two, you’re likely to get confused when people talk about their watercooled spindles and VFDs

Thank you for your heads up

Routers from now on.

Now… is there a better choice with an air cooled system that you recommend ?

All the options were pretty thoroughly discussed in:

I’m trying to get my S3 XL ready for a lot of aluminum (sheet mostly) work. After reading so many posts on choosing among the drive options, here is my conclusion. Please chime in if you feel otherwise, and why. Water Cooled Chinese Spindles: Pros: Lower tool noise, however, the noise of cutting material is the same. Spindle owners consider it a substantial difference. Speed controlled via software. Precision mounts. Higher torque, but not really relevant due to the overall limitations of t…

One further consideration is that there is a version of the Carbide Compact Router in testing which uses ER-11 collets — not sure when they’ll finally be in stock, but I’ve been testing one and it’s awesome:

Router with ER11 Collet? Say what?!

Interesting story for you: We’ve been working with our router vendor on this for about a year. They didn’t know how to make it, so we had to get their CAD files and then @Luke redrew everything to make it ER-11 compatible. We have a person working for us in Hong Kong to help with local vendors and this took a lot of effort on his part. They didn’t understand ER-11 and they didn’t want to share CAD files. Luke got the design done and Bryan, our local guy, worked to get samples made, because …

I indulged myself w/ a Mafell FM 1000 WS, but the expense was hard to justify, and I only managed it as an indulgence for my birthday/Christmas and because I do a lot of test cuts as part of tech support to the point where some days it felt like I spent more time wrenching than cutting.

It is a simply amazing mechanism. It feels a bit like the Sig Sauer I had occasion to try at a gun range once — like something made by magical Bavarian Elves. It’s a 220V unit which I’ll be using with a transformer: and grounding plug/converter: and a wonderfully generous and talented individual here has offered to make an 8mm–6.35mm reducing bushing so I won’t have to use the off-balance Amana RB-106 I purchased. Next up I think is seeing if I can get a better finish than just scrubbi…