Carbide Motion doesn’t directly have that option, but you can:

Best practice is to break up jobs into manageable chunks: http://docs.carbide3d.com/tutorials/tool-change/

If you must do this:

I take it pausing the program and leaving everything switched on and resuming the following day is not a good plan, because (at least) the step motors could/would get very warm?

How about if you pause the program on the PC and then turn the machine off, could it resume from that point when the machine’s turned back on, or does it need to reinitialise it? (which means I’ve probably answered my own question!)

I leave mine on when I need to. Sometimes for days.

Correct. Stepper motors work their hardest when holding position, so leaving the machine paused for longer than necessary is not a good idea and is actively discouraged.

Powering down the machine would require reinitializing on startup, and would lose the progress in cutting the file.

Where did you get that notion ?

My understanding is that stepper motors use offset permanent and electromagnets to work, turning off an electromagnet to allow a permanent magnet to move the machine in a desired direction, then turning on a second magnet to continue the movement, &c.

Movement means that there are continually different magnets being use, distributing the work/effort, and the areas to which current are being applied and which build up heat.

Micro-stepping complicates the above, but basically means that one constantly alternates between two magnets so as to hold a micro-step position in-between a full-step position.

If stepper motors are holding position if not at a full-step position, then pairs of magnets are constantly engaging and disengaging, generating and concentrating heat buildup at those two magnets.

Thanks for the answer, and it is worth consideration. I like to understand things…
Here is how “I thought…” it worked.

the inside of a nema 23 micro stepper motor, 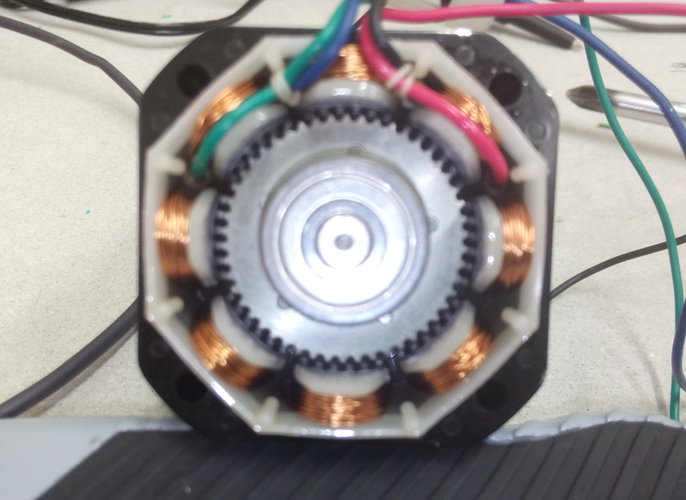 4 leads going in, = two sets of windings, at two opposing sites per winding = 8 electromagnetic positions to pull from. You might also notice the rotor has 50 points on it x’s the 8 windings = 200 steps per rev.
of course you already know that, but the part you may consider is best shown in the animation at this site,

A stepper motor, also known as step motor or stepping motor, is a brushless DC electric motor that divides a full rotation into a number of equal steps. The motor's position can then be commanded to move and hold at one of these steps without any position sensor for feedback (an open-loop controller), as long as the motor is carefully sized to the application in respect to torque and speed. Switched reluctance motors are very large stepping motors with a reduced pole count, and generally are clo...


the stepper does not

turning off an electromagnet to allow a permanent magnet to move the machine in a desired direction, then turning on a second magnet to continue the movement

There’s a bit more on this at:

Of course, leaving any equipment powered up and unattended for extended periods of time is not a good idea

The way I look at this is, let’s say the power injected into the stepper is constant (not that I checked, and it depends on the driver), when the stepper is idle, all that energy becomes heat. When moving, some of that energy becomes torque/mechanical energy, the rest becomes heat. Therefore, steppers get hot(ter) when idle, and not as hot when moving. I assume they are designed to take that idle heat (assuming they are driven within their specs), but that’s not really problem, as you both said it’s leaving a (high)-power equipment unattended that is the real concern I guess.