I have a Shapeoko XXL and a Shark Pro Plus HD. I had previously made a Myers Woodshop spoil board and cam clamps for my XXL and have flattened it a couple of times. The spoil board on the XXL is now .60 inches and it started out as .780 inches. I had a problem after the first or second flattening of getting inconsistent depth on projects and figured out that my original 1/4-20 bolts that hold down my cam clamps were 1.25 inches long. After the flattening the screws were too long and pushing up on the spoil board and causing the inconsistent depths. Easy fix I went to the hardware store and got some 1 inch 1/4-20 bolts.

Since the newest version of Carbide Create (CC) I am now able to run my Shark machine by editing the gcode and removing commands that the Shark does not understand. I had previously made a spoil board with T-slots machined with a router bit and then the 1/4-20 tee nuts. So since I have started using the Shark I made a new spoil board. The spoil board is made and just waiting for Amazon to send the Tee nuts I ordered.

The Shark spoil board is .780 and the Shapeoko is .60 requiring different bolts for each spoil board to keep the bolt from bottoming out on the base board. So I marked half of the clamps for the Shapeoko and the other half for the Shark. Since they require different bolt lengths I can keep them separated and not have the inconsistent cutting depth.

Luckily I noticed the difference in thickness of the material before it became a problem. If I need to replace a clamp I can just remark it. Additional if I flatten the spoil board I need to replace all the bolts in mass for the particular machine.

The reason I have so many clamps is they sometimes get cut up and I just throw the damaged clamps away. 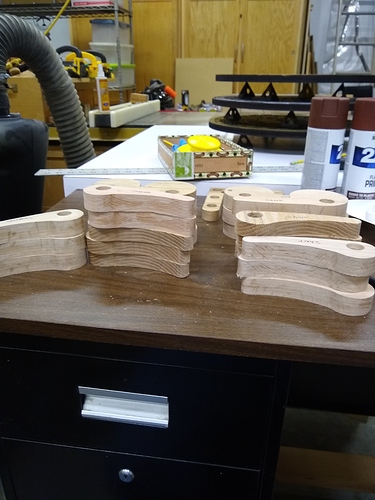 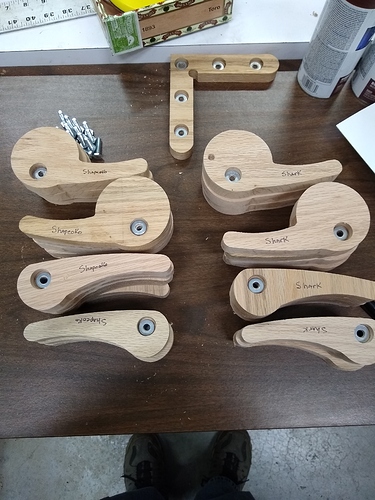