Suggestions for making a part

This is a part for a wheelchair (specifically a Quickie2). It is the locking/swing mechanism for the leg rests. Shown is the main body. Not shown is the spring-loaded locking shaft that fits in the large hole. The entire thing is about 40x50x70mm. The original part is molded plastic with metal spring and shaft. Replacements are $45 each and two are needed per chair. Because it is plastic, pieces break away easily and would need frequent replacement. But I have a CNC and a 3D printer. Because the OEM part is plastic, there are obviously no real safety issues…it is more an issue of convenience when swinging the leg supports.

I 3D printed the assembly but I fear it will suffer the same fate as the OEM plastic, molded part. I asked if the part came in metal and was told it does not. That doesn’t mean I can’t make it in aluminum, though. But it’s way too difficult for me to make on my XXL. It would require machining on three sides and registration would be way too difficult for me. So I thought of combining 3D printing with aluminum machining to make the part.

In the included pix, the part that breaks away is the lip at the left side. That fits into a complementary raceway. The raceway, by the way, is metal (who would of thought, huh?). I am thinking of making that portion of the part from aluminum (machining the slot and 1 inch diameter semicircle on the XXL) and adhering/bolting that to the rest of the part, which would be 3D printed.

I’ve done no metal work on the S03, so that would be a challenge itself. Anyone have any ideas? 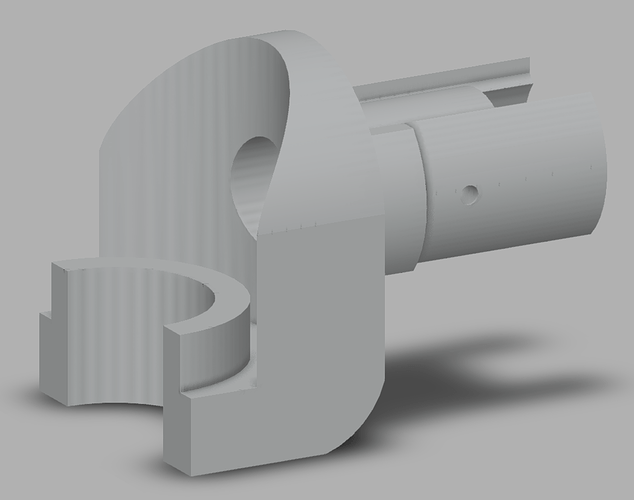 Some wheelchairs have designated failure parts that are intended to ac as a weak link (plastic caster wheels that stick out are intended to break on hard impact, like a crumple zone on a car, on my neighbors chair, for example). This part doesn’t look to be in that category.

I would go with a reinforced polymer for manufacture. For a one or two-off, probably machine out of aluminum.

For a repair, I might use aluminum tubing (or machine the equiv if there isn’t a stock tubing size to match), machine the partial cylinder at the bottom open, and pin the aluminum in with countersunk head screws.

As I said, this is not a safety issue. I suspect most of the damage is done when the wheelchair is collapsed down and jammed in a car trunk for travel. I thought about the aluminum tubing fix. It would be the easiest and quickest. Machining the whole part from aluminum, which would be my preference, would be far too difficult for me because it would need to to flipped several times and would require some fairly long cutters, I think. Thank you for the opinion.

Could you cut the model horizontally along that shaft along to the right, then machine two parts that would bolt together? That would mean machining two sides of each piece to get the exact shape, but considering that you’re putting bolt holes in both pieces, a jig that lets you bolt the pieces a known location for the second side might be do-able.

That’s another good idea for an all metal version. That would be new territory for me, though.