Switched to compression bits and getting inconsistent cuts

I switched to these bits for cutting baltic birch:
https://www.amazon.com/gp/product/B073RKCWGH/ref=ppx_yo_dt_b_asin_title_o03_s01?ie=UTF8&psc=1

and now I’m getting that very small inconsistency where the bit first enters the wood. Is this something I have set incorrectly in the software? Sanding down each of those pieces is getting cumbersome. 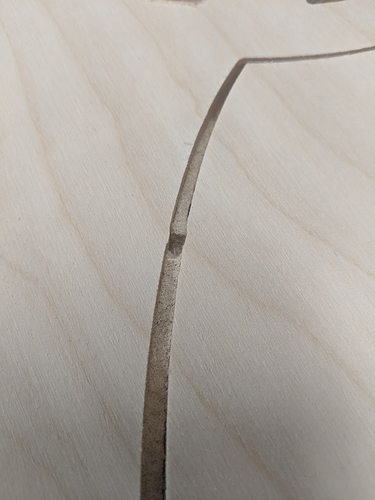 Likely tool deflection. Assuming your are using Carbide Create, @WillAdams explained here how to artificially add extra geometry that you use for a first roughing pass (that will still have this deviation at the entry point) but then you follow up with a finishing pass on the target contour: this time there is so little material left that the tool will not deflect, leaving a clean profile throughout the perimeter.

I’ll check that article out…and google tool deflection. It doesn’t seem intuitive to me as this has not occurred in the past with other cuts…they have been 100% clean. It’s probably because I’ve increased the speed and depth per cut.

Would moving to a different software “fix” this issue?

Are you running a deeper cut in order to get the compression cutter deeper into the work?

If so then you might want to consider a roughing cut first with a normal cutter leaving some stock, say 0.5 to 1mm and then coming back with a full depth pass with the compression cutter to clean up the edge on a very light engagement.

Yes, deeper cuts mean more force on the cutter, especially in that split second when the cutter has just finished the vertical plunge (so it does not see any lateral force at that point), and starts moving along the profile cut, at full depth: all of a sudden there is a large resistance, enough to make a small tool deflect just a little bit.

@LiamN’s tip is a (great) variation of the “roughing then finishing” approach, indeed a single pass at full depth with a compression bit after the profile has been roughed will leave very clean edges at the top and bottom.

Carbide Create does not (yet?) have a function for automating the creation of roughing then finishing toolpaths, but you can emulate it with creating extra geometry like Will explained in that article. Short version: create an additional profile, offset from the final one you want to cut by say 0.5mm. Do a normal profile cut on that offset profile, using your regular cutting parameters (probably limiting depth per pass to a fraction of the cutter diameter). Then create a second toolpath, the final/finishing one, by selecting the original profile, but this time there is so little material left to shave off (0.5mm all around) that you can afford to define depth per pass as being the total depth, i.e. go around your part in a single pass.

Other CAM software packages have built-in parameters to do the same, it’s essentially the same idea but they just spare you the effort of creating the extra geometry explicitly. It’s “only” a productivity thing.

Yep, sorry, I’ve never used CC as I was a Fusion user before a Carbide customer.

Compression bits are designed with an upcut on the bottom of the bit and a down cut at the top of the cutter. The middle is to chew up plywood.

Now as to your deformation at the beginning it may be the bit runout, router wiggling or just bad luck cutting with an upcut bit. Try a down cut bit.