Talk to me about adding a laser to my Shapeko

I’m sure it can be done but know nothing about adding a laser. What kind of laser should i look into if i just want to burn designs and words into wood? Can it be wired into the shapeoko control box so machine recognizes it or do you just reset 0 for laser and run a program with spindle off and laser on? What should i look for in buying a laser, certain brands better than cheap junk? Appreciate any and all info on the matter.

A monkey gets his hands on a Shapeoko (Regularly Updated)
Experience with Laser Conversion
Making a CNC machine from a CNC machine
Radiation (Josh) August 5, 2020, 3:16am #2

Jtech laser has an addon kit for the shapeoko. Lightburn is the program you’ll need.
I think you need to manually offset the laser from your spindle (so you’ll have two zero points for the machine effectively). I’m not super sure on details, as it’s something I keep meaning to look into (especially as the makerspace laser is looking more unreliable) but haven’t yet.

I have written a short section about adding a laser to the shapeoko in the ebook if you want to check the basics there.

Zeroing works the same as for CNC jobs, the only thing to consider is choosing a common zero reference for the CNC part and the lasering part, for example a corner of the piece.

For engraving the surface, you won’t need a powerful laser. I went for the 2.8W Jtech, there 's a thread somewhere where I discussed why, I could try and find it. EDIT:here for example.

Adding a laser is easy enough, but please have SAFETY as your top priority. If you have specific questions on how to setup or use it, I’ll be happy to help.

Wouldn’t the 7W engrave faster/ cleaner? or is the extra cost just not worth it? I’m quite interested in this. I recently did a test cutting a QR code to see if it would work, it did, but a laser is really what is needed for that I think. Mixing CNC carving with laser etching in the same project sounds really cool.

I couldn’t say, I tend to think 7W would be most useful to cut stuff (ply), but 3W has always been enough for me to engrave (which is all I ever do) and I could not justify the extra cost (the Jtech models are not cheap)

If you’re making money on your machine or you have the funds then the 7W would be a viable option. From my understanding, the 7W will allow you to be able to reduce run time (more power, less passes); but if you’re looking for fine detail then the high resolution lens add-on (~$20) would get the 4.2W/7.2W comparable to the 2.8W laser. You gain mainly speed and cutting potential. Jtech SO3 kit description for reference.

I have a Jtech 2.8W that I run using LightBurn software.Someone on the LightBurn forum just completed their first QR code engraving. I’m not sure if it’s a Jtech on the Shapeoko; however, it gives you an idea of what it would look like laser engraved (and I’m confident that you could acheive similar results with a Jtech/SO3 setup).

@ Kholzschuh1 I have the 7W JTech laser and it’s pretty terrific. I don’t use it for cutting yet, but it’s fantastic for etching text, photos, etc. onto just about anything. The 7W will is approx. twice as fast as the 4W, which is twice as fast as the 2W (roughly). Personally, I don’t like waiting for things (you can ask Carbide support about how patient I am for a ZPlus or HDZ!), so, if I can cut my build time in a quarter, I’m going to do it.

The laser mount is “permanently” attached to the spindle. I have a SuckIt, so I got the mount that puts the laser to the side of the SuckIt arm. It offsets the laser (as noted above). The laser itself has positive registration pins and earth magnets to hold it in place when you mount it. It mounts really easily. The only thing I don’t like is that one of the two connectors that you have to attach each time you mount or dismount the router is rather small. Jay at JTech assures me they don’t have problems with it breaking over time, but it just feels like a failure point. Small worry.

The offset is not an issue when it comes to zero, because - if you’re like me - you don’t zero the unit before your burn with the laser. You use the “Start from current point” option, which runs the design relative to the current laser position (Start point). So basically, position your laser on the start point of your design and say ‘Go’. To mix laser work with CNC work, you just need to make sure that your work has a start point that can be found even if the other operation has finished (i.e., you don’t cut away your start mark, or burn it away before you rout).

There WAS a problem going between CC and Lightburn with designs, in that they used different algorithms to size the design from an SVG file. But, thanks to @Julien and a few others here, we lobbied to get the two products to arrive at a common and tolerant solution - so you can now move an SVG from LightBurn to CC or from CC to LightBurn, and the design remains exactly the same size. So you can design your burns on the cutouts (or design your CNC work around your burns) with confidence.

The last point on zeroing - which I haven’t tried, is that, since the laser is a fixed distance offset from the zero of the router spindle, you COULD create a GRBL macro that repositions the shapeoko to compensate for that offset. So, for example, you can run your CNC job based on its zero, position the head at zero, then run the offset macro to get the laser head at that same zero, and then run your LIghtBurn job from current location. I’m doing that manually right now, but you could do that with GRBL and forego the need to worry about missing your mark slightly.

I’m not an expert on any of this…just starting, really - but if there’s anything I can do to help / answer any questions, I’ll try!

Sold … now where has my wife hidden the credit card.

Regarding the safety of adding a laser:
Glasses are a must…and they need to be designed for the wavelength of the laser. The glasses that come with the JTech kit are the bare minimum (2.0 OD - the higher the OD the better)…Jtech sells a 6.0 OD version, but I found them on EBay for half the cost. I bought a couple of them - so that I can have people in my shop when the laser is running.

Personally, I hooked up a separate power switch for the laser (not the firing of the laser, but the powering up of the unit), so it’s not powered just because the Shapeoko is on. Then, I split the power after the switch to turn a warning light on a sign at the entrance to the shop and hung the extra glasses from the sign. This way, anyone who wants to come in, will protect their eyes. Here’s the sign: 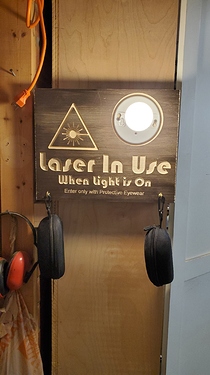 Thanks everyone for the information. Guess it’s time to purchase a laser and see what I can do. I’m sure I’ll have more questions along the way.

If you have the funds look into Opt-laser it is a very nice setup with an optional magnetic quick connect. I like the machined aluminum finish far more than 3d printed J-tech but it comes at a cost.

Check the Shapeoko Laser Upgrade with PLH3D-6W-XF. The set includes everything you need to connect and install the engraving laser head to the Shapeoko machine.

Edit: So it seems it is available in the UK through robosavvy. I don’t know how I missed that. The rub is its still $1100 ! go figure.

That is a lot…I didn’t have to deal with the importing thing.

I have a simple question, that I suspect has a complicated answer…

Is Carbide 3D considering selling their own laser option?

Now there’s a thing. I’d be interested in that for sure.

I’ve been looking at the JTech option for a while, and it would be nice to have laser capabilities without having to find room in the garage for a separate machine. The cost of the JTech is comparable to two stand-alone options that I’ve considered.

The first is a “K40” style laser–this would be a stand-alone option, but it has CO2 laser that can actually do some cutting, and these units seem to start around $400 or so. Youtube suggests that by the time you’ve tweaked the unit, you might be in the $600-$800 range. Cutting area seems to be about 11" by 17" or so.

The second is a machine I’ve seen called the Ortur Master 2–they range from about $200-$300, depending on the power of the laser module you get. The highest they call a 20W laser, but that’s input–output I think is around 7W. It’s a diode laser, not CO2, seems comparable to the JTech options. It’s a stand-alone machine with no enclosure, it works with Lightburn (not included) and there is even a rotary attachment you can get for $80 that will engrave your Yeti mugs.

So I haven’t decided yet, but my decision points are:

K40: More powerful, cheaper than other options. Downside–defnitely NOT plug and play. Cutting area not as big as JTech.

Ortur Master 2: Cheapest. I think similar if not the same power level as the JTech at less than half the cost. But stand alone unit that will need real estate in the garage.

Here’s some additional weight, Vectric just added laser toolpaths to its software, so lasering toolpaths are supposedly go right along with the normal toolpaths (assuming XYZ is synced.)

Playing with a laser Gallery

There’s a reason that we have never offered a laser even though we know we could sell a ton of them.

I think there’s always the fact that having a stand alone machine will allow you to run both machines at the same time as well as not having to tear down setups for different operations (laser vs milling).

The biggest pro I can think of for the Jtech/SO3 setup is the large work area (if you have an XL or XXL). When compared to the Ortur Master 2, a standard SO3 has about the same work space. I’m not sure about other companies, but Jay with Jtech Photonics is on the ball when it comes to support.

With the low cost of entry, the Ortur seems pretty attractive especially since people have been having success with them so far.