I’ve never used this method of hold down before but i want to give it a try. I’ve done the double sided tape method for many many years but the tape cost nearly $20 a roll for 2" wide.

So is the 3M Scotch Blue the most commonly used tape, or do others work just as well?

Any specifics on the CA glue ya’ll use? Great Planes Pro CA Thin is what ive also used for hobby stuff, but i’m thinking the thicker stuff would be better maybe faster setting so an accelator doesn’t need to be used.

If there’s a dedicated thread to this topic, just point me there. I did some searching but the results were sporadic replies for threads.

Thinner CAs typically cure much faster than the thick and medium variants.

Bob Smith Industries is one of the industry leaders in cyanoacrylate glues, and I believe Great Planes uses them. The glue supplied in the Carbide 3D Super Hold kit actually is a Bob Smith glue as well! The glue supplied in this kit is a medium variant, which helps to flow into the pores of the tape and fill in any inconsistencies.

I buy a Six pack package of the cheapest masking tape (note NOT painters tape) at Lowe’s and have had great success (never lost a part). It’s almost half the price of paint. As far as glue I use both thin and thick depending upon what I am gluing (non-flat wood versus flat metal/wood). But that’s just me, what do I know I’ve only been in this business for 45 years, and a 5+ year shapeoko customer

Bob Smith Industries CA is great stuff and I used it for a while but here in Australia it is extraordinarily expensive. I thought I would try a cheap variety from my local hardware store. Has worked well for me with wood and never had a breakaway, even used it with some light aluminium work. The CA in the image below costs A$1.60 (that’s about US$1.00) for 6 tubes! Another advantage is that being in small sealed tubes the glue doesn’t ‘go off’. With this ‘cheap stuff’ one doesn’t get the variety available from BSI of course - not a big deal for me. 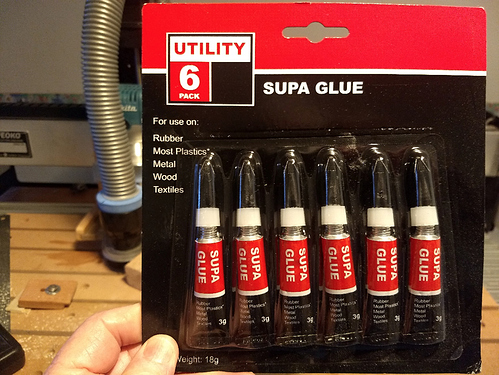 and have had great success (never lost a part).

I’d be interested in your “spoil board”, Rich, because I found that the tape you use depends somewhat on the surface it is sticking to. I changed tape after my spoil board developed some surface cuts (of unknown origin!

I’ve had good success with “FROGTAPE” (I hate their package!) over regular blue tape. I’ve only used “2P-10” adhesive with accelerator. 2P10 is slow enough (about 5 seconds) that I can wiggle the part into place thus thinning the layer as much as possible. Thinner layer = stronger bond.

Any chance it’s this stuff?

True true true…my spoil “board” is EITHER the OEM Shapeoko 1/2" Aluminum Table…OR… some kick ass beautiful 3/4" African Mahogany (left over from my Desk project…you know that project?).

THAT stuff exactly! Good detective (Have you been in my shop?? lol) or guess…

EDIT ADD: While I was working on my engineering undergraduate degree I worked for a Tape Manufacturer…(JB Prata)…and we made Tape…and a LOT of Masking tape, Painter’s Tape and Drafting Tape (Some of you are saying…Drafting Tape…Huh? LOL)…ANYWAY…there wasn’t any difference except the drying of the adhesive…WHAT??? (Yeah that’s what I said)…Sticky, less sticky, and even less sticky…OK some have a special edge treatment for paint bleeding…but we don’t need that here…right?). So I asked myself…first, not many people know as much as I do about masking tape…and SINCE I am NOT leaving the tape on my machine for more than a day (usually just an hour or two), WHY on EARTH would I pay the difference for less sticky Painter’s tape…RIGHT? NOW YOU…know the rest of the story.

I ran across a roll of it in my drafting kit from the '60s. There was even a triangle in there. Nope, the tape wasn’t sticky; it was stuck!

Ok, Rich. I’m going to buy a roll of the cheapish tape that you mention and compare it to the overpriced crap that I bought. More later …

I moved over to the Scotch blue because it sticks much more reliably to the surfaced MDF than the cheap no-brand stuff did and the adhesive is easier to get off the workpiece too. It’s not cheap but especially for Aluminium parts I think the short lengths of it I’m using are worth it. For larger wood parts the tape is much less critical because you’ve got a much larger bonding area.

I use this cheap construction glue with any can of ‘accellerator’ that is to hand;

I will also say, the Scotch tape is more resistant to the glue soaking all the way through the tape than the cheap tapes are.

@RichCournoyer sounds like your running some pretty nice spoilboard materials…so whats your thoughts to surfaced MDF like @LiamN mentions that most of us probably have? Any reason the less sticky painters tape would stick better to surfaced MDF than the stuff your using?

Clearly not an MDF Expert …but as I said ~ the only difference was the drying time, which translates into the amount of solvent left in the adhesive…

So perhaps the excess solvent is reacting with the MDF’s adhesive and possibly causing it to partially dissolve?

I use plain painters tape on back side of workpiece. Spray painters tape with 3M 77 super adhesive. Wait til tacky to touch with your knuckles and then set to wasteboard and away you go. Never had a failure yet.

As someone who develops new tapes at 3M, I will say that there isn’t much difference in low end tapes made by small manufacturers. They buy cheap natural rubber, mill it, solvate it, coat it, and dry it to result in an ok masking tape. Natural rubber sticks well to a lot of things but has poor shear strength and poor high temperature resistance due to no crosslinking. Nicer tapes use pressure-sensitive adhesives (PSAs) made from styrenic-block copolymers that have better cohesive strength and better shelf-life.

I will note that much of this doesn’t matter for what we do. The chemistry of the PSA doesn’t affect our short usage time much nor does it affect adhesion much because we bond to such high energy substrates (metal and woods). I would focus on using a tape with good adhesion to your substrate and has a thick enough backing to resist slivering (when your tape rips in the lengthwise direction while trying to unroll it) and when removing it.

I’m doubtful of the tape solvent diffusing in. Try smelling the tape and if you can’t smell much solvent, there’s not enough to diffuse and do any harm.

There is a reason to pay for “less sticky” painter’s tape. Just because a tape is “sticky” does not mean it will provide shear strength. Tack is in direct opposition to shear strength in tapes. If you want a sticky tape, it won’t work well as a Command strip holding a painting on a wall. Plus, tack doesn’t correlate to adhesion either. Those are two separate scientific measurements. Tack is the ability of a PSA to quickly wet out onto a substrate, while adhesion is the resistance of that adhesive to separation of the substrates. Since what we do in milling primarily induces shearing forces, we need an adhesive that resists that and not one that only focuses on tensile forces. I did a number of measurements for Winston 2 years ago on double sided tapes, although I didn’t compare them to the masking tape/CA method, and you want a stiff, not terribly tacky tape to best resist shear forces.

I will point out that you will want to use a high quality tape (3M 301+ or 401+, 3M painter’s tape, Frog tape, powder-coating tape, etc.) when you want to stick to medium to low surface energy substrates - plastics, especially HDPE, acetal, LDPE, PP, etc.

@CrookedWoodTex - The reason for that is some rubber-based tapes age by crosslinking further until all apparent tack is gone. This happens notably to most masking tapes.

If anyone has any questions on tapes or adhesives, I’d love to answer them. They are way more complicated and way more engineered that most people think.

I will note that the primary benefit of Frogtape is that they put a special material on the edges of their tape to absorb paint intrusion from going under the tape. If you don’t need that, you aren’t getting any benefit from it and are overpaying for what you need (and those plastic trays they have to put it in to keep the edges pristine).

I just realized, I didn’t discuss the CA question. I don’t know as much about this as I’ve been working on epoxies this last year but not acrylates. I will ask a coworker who specializes in that and get back to this thread.

@The_real_janderson , what you’ve just said is one of the most insanely intelligent things I’ve ever read. At every point in your detailed, coherent response there was everything that could be considered a informational thought. Everyone in this room is now smarter for having read it. I award you all the points, and may God bless your soul.’* 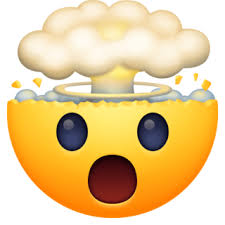 3M #2093 ScotchBlue. Swear by it. Works great in shear, particularly with MDF and HDPE. More often than not its a struggle to get things off the MDF wasteboard. CA glue still on the hunt for perfection. Use LePage (Canada) brush on CA and it is invariably what gives up first. Hoping for some better options from this thread!

I cut only plastics, primarily cell cast acrylics and HDPE. I typically rely on 3M products, which are generally superior. But even at my generous wholesale rate, the tape is expensive, and I use a lot of it. I recently switched to the cheapest garbage masking tape I could buy, and thus far it’s performed admirably. It has a terrible feel, and comes off the roll like the garbage that it is, but has held everything just as intended. I typically use a .005” 15 degree engraving tool for marking, and I’ve yet to see anything outside of what one would expect from the spec’d deviation of the plastics nominal thickness. On the plus side, it’s easier to remove from the waste board surface, which is mildly textured for the purpose.

For CA, I use the cheapest large quantity stuff I can find in a case. The BMI stuff is pretty cheap. And the same applies to activator, I use whatever I can purchase for less in aerosol format.

Thanks so much for dropping a knowledge bomb on this discussion! I knew there was science involved, but marketing can be very good at obscuring what’s actually going on with a product.

I am planning to cut some delrin (acetal) soon, and it’s not a very big piece, so I’m a bit worried about losing it off the MDF spoil board. Ages ago I had a product that claimed to glue Delrin, but it barely worked and the surface prep compound made our engineers behave strangely when accidentally inhaled. We gave up on it, and I’ve never again tried to adhere to Delrin.

So my question is, are there any special measures such as heat or chemical pre-treatment you can think of that would help masking tape (painter’s tape, powder coat tape) stick to Delrin?