I like the Shurtape that comes with a nomad 3. I’ve been experimenting with Shurtape’s other tapes.

To be honest many of them are the same. I suspect Carbide did some homework before choosing the one they did.

Shuretape DS154 is probably the strongest and comes in a 48mm roll. I really like it for work holding where I’m not doing any full depth contours, but DO NOT use it for contour cutouts. Carbide 3D may already know the result, as they just sold me new bits to replace the one I ruined. And not only will it gum your bit (it is fixable but takes a while to clean and noticeably dulls it) but it also gums your part. On delrin was easy to scrape with a sharp blade but in many materials would be a ruined part.

*edit I would add that when I say it’s strong, it’s strong. I have a piece of 14ga brass that is a permanent part of one wasteboard. I’ll remove it eventually, but for now rather than risk bending it, that is my “brass board”, with the sheet ready to go when I need it. *

Suretape DF 65 and DT200 performed about the same for me. But it was 15F in my shop last week and the DF 65 would no longer stick to wasteboard. Buy a space heater you say? No.

I haven’t been able to get my hands on some DF 545 yet, but I suspect it’ll be similar result. Maybe next time I need tape I’ll give it a go.

Just curious, are you zeroing off the stock top? The method of zeroing off stock bottom or more precisely “top of the tape” allows to do contour cuts all the way through that will barely scratch the tape, which mitigates this a lot. The optimal way it to zero Z off something that is the same thickness as the tape you are using, laid on the wasteboard.

Anyway, good info on the various tapes. I still like blue tape & glue better, but I’m not a Nomader either so that may not be pratical on a Nomad.

yeah absolutely, I do both. And of course it’s always a matter of whether I’m pre-planing stock or doing a surfacing, and then whether that surface jumps straight in to the cuts or I rezero, etc.

I’ve started doing some small production and off-the-shelf tapes can shave off time. Now that I have my jigs set up and code pretty well finalized, anything where I can set and forget helps.

In general I’m opting for clamp solutions over tapes, but some cuts are just easier with tape. If I’m zeroing from top I usually just do a quick caliper measure before I start, and adjust the counter cut if I need to. Or add in an extra surface pass to keep the numbers the same. But hitting tape happens, so figured I’d experiment and see if I could make that a little more worry free.

I use the Scotch blue with CA glue, if the bit goes down into the tape, or when cutting along an edge if it picks up the end of the tape I get goo on the bit. I just pause the job and wipe the cutter off with a cloth and some Isopropanol, the tape glue dissolves instantly and just come off the cutter.

This stuff also cleans the goo off instantly, along with wood resin and other deposits 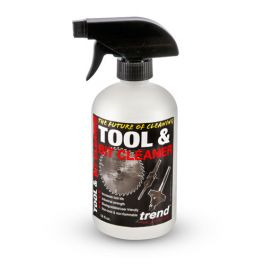 I’ve found zeroing off two thicknesses of tape stuck to the spoilboard next to the workpiece mostly lets me cut through without too much goo, I leave the final full depth passes till the end of the job, as much for workpiece rigidity as anything else.

Can you explain what you mean by “noticeably dulls it”? The bit is dull while it is gummed up or it is permanently dulled? Is the cleaning too aggressive? Are we talking about cutting normal wood? I don’t see how you can wear out the cobalt matrix so fast with normal wood, especially considering full depth contouring is typically the last step in most people’s workflows doing one-off items.