I’m using a #501 engraver to carve out text on 6061 anodized aluminum. The text that I have in my design is not being cut from the material. The bit goes right down to surface and traces the engraving path, but never goes deep enough to expose the aluminum under the anodized surface. The really weird thing is that I use the same bit to carve out some shapes I added to the design and they carve out just fine, using the same depth of cut. What could explain this?
IM-2131-VCO-AluminumPanel.c2d (317.5 KB)

If some shapes are fine while others are too shallow, for the same settings, this probably means that either the underlying wasteboard is not perfectly surfaced/square to the X/Y axes, or the stock itself does not have a perfectly constant thickness (down to sub-0.1mm precision)
A spring-loaded diamond drag bit could be a way to remedy this (the spring will compensate for uneven spots in the anodized surface).

But when I go over to the area to be carved and move the bit to Z 0.0, it’s right on the surface. I even increased the cut depth, but that made no difference.

I have an MC Etcher, but I’m not really satisfied with the results on small shapes and letters. An engraving bit gives a much cleaner cut.

can you upload an example of a generated g-code file you ran that contains both areas that were ok and others that weren’t?

Nothing suspicious in the file, the Z depth for the letter outline is performed at Z=-0.039", the hatching in the interior too, so it should engrave them in the same way. Since it doesn’t, it’s either the stock that is uneven of the Z zero that is set not quite right ? Have you tried lowering Z zero a notch and rerunning ?

Yeah, it must be a stock height issue. I’ll try lowing Z 0 and see if that helps.

I adjusted Z0 where at the position where the characters are located,
and it carved out okay. It’s hard to believe that there would be that much of a variance of the surface level in a distance of 40mm (everything 40mm to the right milled fine at the original Z0). I’m working with 1.6mm aluminum sheet. 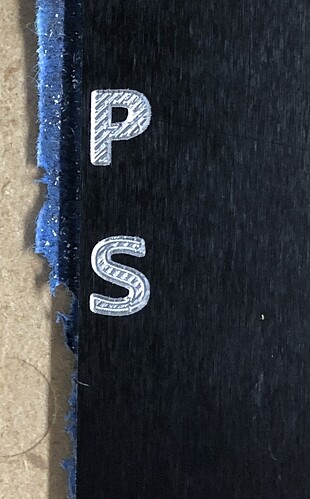 When you rezeroed Z at the position where the characters are located, did you end with a Z0 value that was different from the previous one set in another area ?

It could be a subtle variation in how thick the tape & glue are on each side, or something like that.

Interestedly, the thickness of the tape I’m using is 0.09mm

When I use tape and superglue I zero after the material is glued down. Be careful not to overlap the tape strips. They need to touch but not overlap. I usually put a line of Titebond medium super glue down in the center of two of the strips. Error on the side of too little glue because it spreads when you press down the material. Use a roller to press down the material so the glue spreads evenly. I do not use accelerator because it bonds immediately. Engraving on any material is very sensative to variations in material thickness so surface if possible.