The "Oops" and "near-Oops" thread

Feel like sharing your latest oops moments? Here’s mine from this morning. I was about to start a one hour job and thought, “well it’s been a while since I checked my dust bucket”…near-Oops. 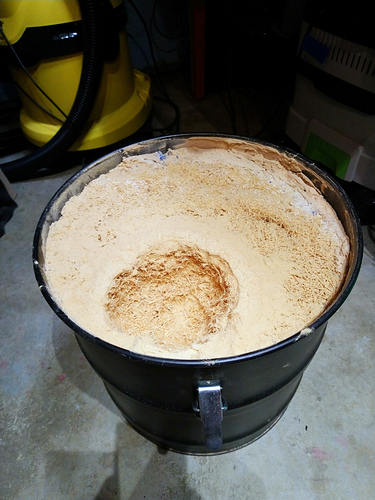 Have you considered getting a liner/bag to go in the barrel or do you just dump that in your yard somewhere?

Have you considered getting a liner/bag to go in the barrel or do you just dump that in your yard somewhere?

I’m afraid it just goes to the trash (which is a shame, there must be ways to recycle that, but I don’t have a fireplace either).

That would be convenient, I’ll let you investigate the options because if I go that way I’ll end up with yet another over-engineered-arduino-frenzy solution

t would be convenient, I’ll let you investigate the options because if I go that way I’ll end up with yet another over-engineered-arduino-frenzy solution

Haha! I still need to get the dust boot/80mm mount going for the SO3, not to mention my central dust collection needs to get routed. If you were to wait for me, you’d be Saito - an old man filled with regret, waiting to die. It would probably be over engineered plus slightly hazardous and overpriced.

Could you compost the chips? Usually what I do with the runs that dont have mdf dust in it.

I have a pair of solutions for this issue. One provides a visual check that has been incorporated into a retirement community woodshop where my wife & I volunteer. The second I use in my shop which activates a strobe light when the bin is getting full.

The viewing window was made from a piece of clear acrylic which was heated then bent to conform to the curve of the fiber bin used for dust collection. An opening was cut in the bin and the acrylic window was attached with caulk and pop rivets. 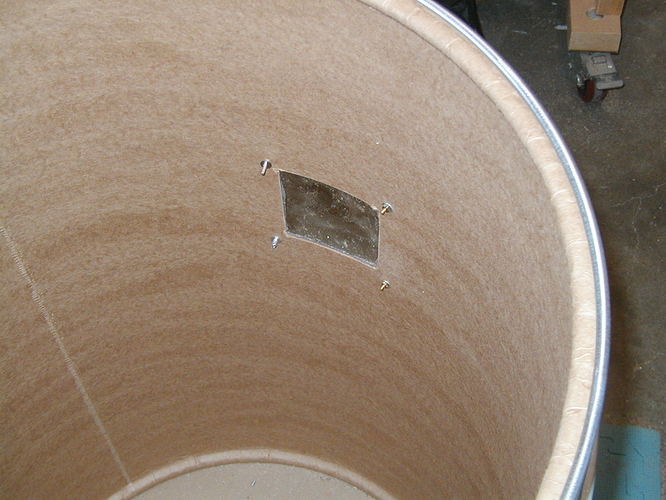 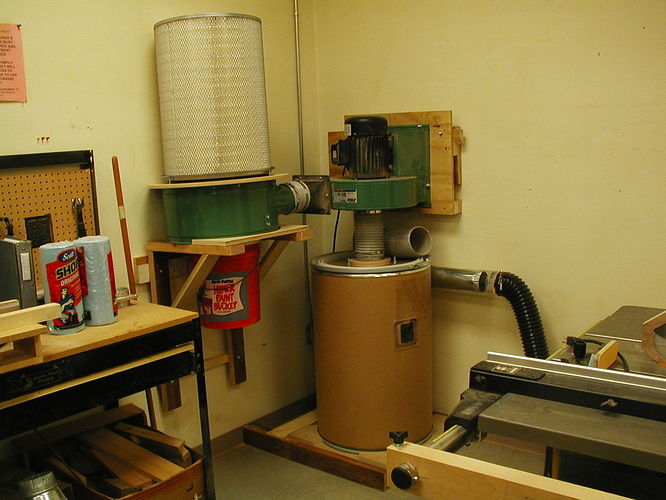 The strobe light is activated by a proximity sensor in the lid of a garbage can which is the depository for my cyclone dust collector. I have included a basic circuit drawing. I made a terminal block to attach the wires because I am a retired computer tech and always think about how easy I can access connections when things break. Functionally this is not necessary but… 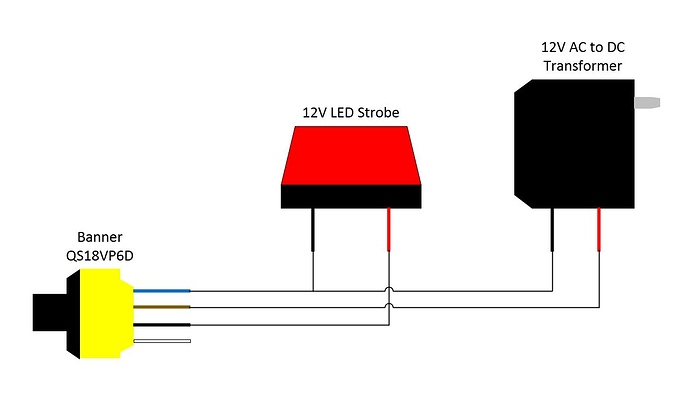 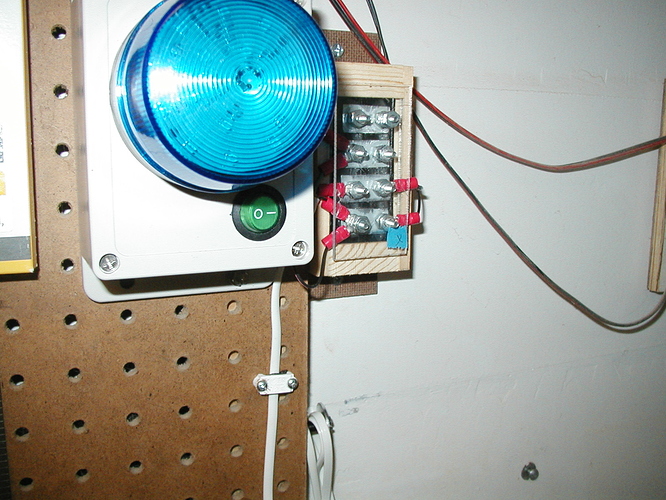 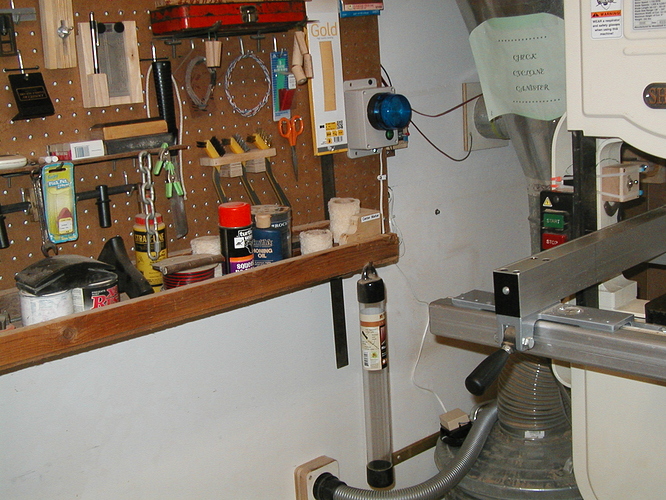 Thank you for the tips !
The window approach won’t work for me since my bucket is inside my enclosure (underneath the Shapeoko), but the prox sensor + strobe definitely will !
Those Banner sensors seem to cost a leg and an arm though…
I’ll see if I can find a cheap(er) sensor, and leverage one of my existing power supplies, but that’s a very sensible solution.

How does it handle the incoming dust? Does the strobe go while it’s collecting?

The sensor ignores the incoming dust so does not activate until the dust has reached the height you have set for the sensor to detect. In my case it is about 4" from the lid but that is tweakable.

Here is the video to the one I built years ago. It works awesome and uses the Banner sensor also.

This was my very first solution after filling up several feet of 4" ducting when the barrel overfilled. 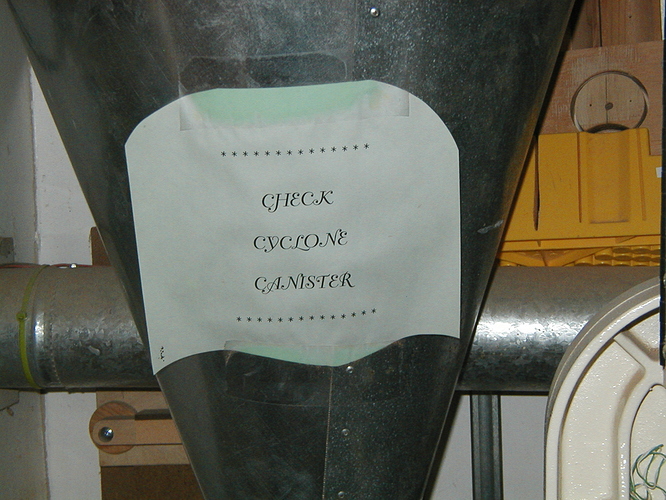 Arguably, mine is one step simpler as you can just look through the clear wall. Fun watching the chips swirl around too! 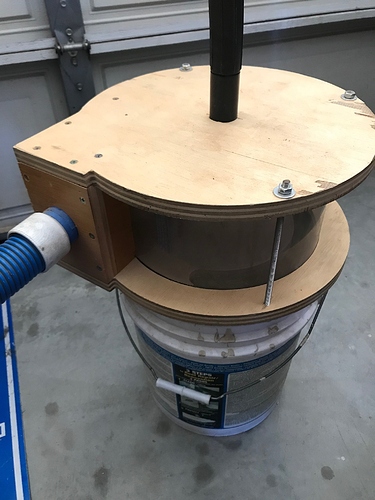 I guess I can add to this thread as well haha, still a little sore about it…but hopefully a good learning opportunity

. I’m still not 100% sure what happened but I think it had to do with losing a tiny amount of steps (no more than a tooth on the X-belt…but I never heard anything and I didn’t have an x-zero reference point to double check) or something weird with backlash?
Basically the whole piece was cutout with a 3-flute 1/8" ZrN endmill (yes 3-flute may not have been wise for chip clearing especially when slotting… but I was paranoid of a single-flute not having nearly the same strength I guess 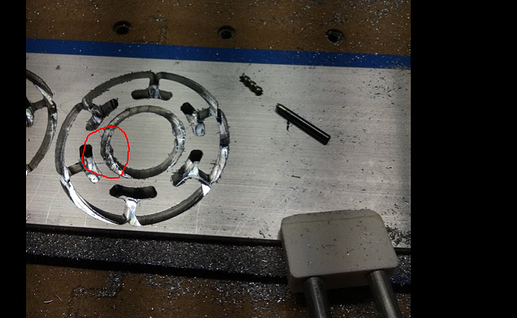 image911×561 157 KB
The center hole was slotted out and then the outline was done (in one rough contour). This endmill broke when it was running a finishing pass (with .125" stepdown), so it should have barely been cutting any material. But, somewhere between the roughing operation of the center and then the final finishing passes, the X was slightly off which made the endmill take a bigger bite than intended out of the center sidewall. Very quickly, it was too much for the bit and it pinballed (word?) between the two sidewalls until it broke…

Here’s the file I was using if anyone is curious:
https://a360.co/2QCNpDJ

I think the 3-flute and full-diameter slotting were a recipe for disaster, but somehow I turned out four of these parts with minimal issues before this one . Not sure why!

I don’t trust myself with 3-flute cutters in aluminium anymore, at least not for “deep” slotting (external contouring, that’s a different story). Well actually I try and avoid slotting altogether, I’d rather spend more time but use a smaller tool and adaptive channelling (?).

Yeah, honestly a 2mm single-flute cutter with adaptive passes would probably be my best bet with these small pieces. Might take forever, but I wouldn’t have to worry about chip clearance nearly as much!
I think I’m going to stay as away from slotting as much as possible for the little stuff. For the big (edit: wood) projects, I’ll stick with contouring so that I don’t go to bed with adaptive passes still ringing in my head lol.

with adaptive passes still ringing in my head lol

Did you mean “with that sweet sweet melody caressing my ears?”

That you say this at all is a reminder that slotting operations are almost always a losing option. An adaptive (trochoidal) method is usually faster since you can be more aggressive and are a lot less likely to break the tool or damage the work.

(yes, there will be people that disagree with this statement, but those people would not the the tool manufacturers. They live on repeat business, and repeat business comes with recommendations that save the customer money)

The only times I have been given the recommendation of conventional slotting in the last ten or more years (CNC… manual is a different game) have been very shallow slots (think 0.2mm deep, 20mm wide) and very narrow slots (think 0.5mm wide).

Maybe have it triggered by weight?

Be careful with your chips in the waste bin. The safest thing to do is let the garbage man take it away. Some people try to give the chips to people that have livestock. Walnut is bad for horses hoofs. Some of the exotics could kill guinea pigs or mice/rats because they can be allergic. If you only use maple or oak the chips are ok for animals but if it is mixed with others throw it away. I burn mine but it takes a long time to burn and I put a fan in front of the burn bin to make it burn completely. I also stir it every hour or two to get a complete burn. Do not put wood chips piled up on a wood fence. A friend found out that on a hot summer day the chips can catch fire. His chip collection caught his wooden fence on fire and came home to the fire department spraying his fence. Plus dumping the chips outside attracts animals and bugs.

OR…do like this guy in Croatia did. He takes his sawdust and mixes it with water and shreds all his newspapers, junk mail, collections warnings, tax bills and phone books and mixes it all to a smooth “glop”. He presses the mixture into “briquettes” and heats his home all winter long.